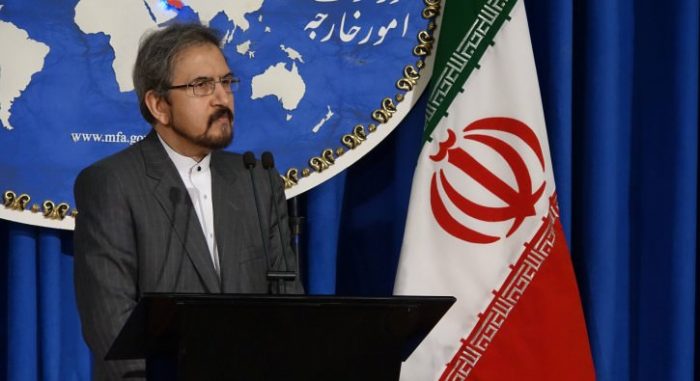 Josh Meyer wrote a story in Politico that exposed a series of concessions granted by the Obama administration to the Iranian regime as part of its ill-fated nuclear talks that have caused an uproar in Congress and in the intelligence and law enforcement communities.

Predictably, the Iran lobby—led by Trita Parsi of the National Iranian American Council—attacked the story and attempted to discredit the idea of concessions being granted to the Iran regime.

Writing in Huffington Post, Parsi makes the argument that not all “concessions” are alike and those tied to the release of Iranian agents were not linked to the nuclear agreement.

“From the outset, Meyer commits a critical error: He insinuates that any concessions in terms of dropping charges against potential Iranian smugglers were made as part of the nuclear deal. In reality, to the extent any concessions were made, they were made to win the release of Americans held in Iranian jails,” Parsi writes.

Parsi attempts to do what the mullahs in Tehran insisted on from the start of negotiations, which is that the issues of its nuclear program and hostages should be separate and apart from the agreement, but in fact the two were intimately related from the regime’s perspective.

The mullahs were especially keen to keep thorny issues apart from the deal because they did not want to grant the U.S. and other nations any leverage to influence issues such as Iran’s support for terrorism, human rights abuses or the lack of any political reforms within Iran.

Allowing Iran to get off the hook for those items relieved the regime of a substantial obstacle to completing the nuclear deal while preserving the mullahs power over the Iranian people.

Parsi even uses the detention of American sailors as an example of quick resolution when in fact Iranian regime squeezed them for all their propaganda value with videotaped interviews and admissions of wrongdoing. Iran mullahs even built a monument to the humiliation of the “Great Satan.”

Parsi characterizes the Iranians who were released as just a “few alleged Iranian smugglers” and ignores the nearly decades-long investigative work done by FBI agents and Justice Department attorneys who meticulously built cases involving large networks of Iranian operatives attempting to smuggle everything from nuclear weapon components to computers and weapons.

He discounts the allegations made by the Politico article as coming from “mid-level operatives in the Justice Department” as if law enforcement agents, investigators and U.S. attorneys were simply mindless drones.

But Parsi’s attempts to deflect and cover up the facts are nothing new to the Iran lobby when the mullahs get into trouble.

For the mullahs in Tehran though, the deal served its purposes in gaining billions in cash and allowing Iranian oil to flow back on the open market. It also gave Iranian regime a free pass to create havoc and shed the blood of tens of thousands in Syria and Yemen.

Now the stage is set for the Iran presidential election which some analysts have speculated could be the end of the road for Hassan Rouhani since he has served his purpose in portraying Iran as a friendly, moderate country during nuclear talks, but now that the façade is off Iran has no reason to be so “moderate” anymore.

This may explain why Ebrahim Raisi, a mullah with a long and sordid history of leading commissions that ordered the execution of over 30,000 Iranian dissidents in the 1980s may be poised to win the election should top mullah Ali Khamenei wish it.

Of course, Parsi authored yet another editorial in Al-Monitor contending that Khamenei has no influence on the election. He even laughably argues that Raisi is not a true contender nor supported by Khamenei.

What Parsi does not mention is the fact that the Iranian regime in addition to manipulating the votes, primarily opts to simply eliminate thousands of candidates from the very beginning to cull down the ballot to a select handful in order to ensure a preferred candidate’s “election”.

It is a formula that worked in 2013 and being used in this year’s election. Nothing unforeseen ever happens under the watchful gaze of the mullahs.

In another development that shows more promise, the Iranian regime admitted for the first time that the topic of dual national hostages was taken up at the first face-to-face meeting between regime representatives and those of the Trump administration in Vienna during meetings of the joint commission monitoring the implementation of the Iran nuclear deal.

The comments by Iranian Foreign Ministry spokesman Bahram Ghasemi mark the first official government confirmation it discussed prisoners with the U.S. at a recent meeting in Vienna over the nuclear deal.

While falling far short of signaling any sort of movement on freeing those with Western ties held in Iran, Ghasemi’s acknowledgement fits the pattern of past prisoner negotiations with the Islamic Republic. It signals more behind-the-scene negotiations could be possible if the Trump administration, already skeptical of Iranian intentions, is willing to deal.

Speaking to journalists, Ghasemi mentioned no specific names of the inmates brought up by the Americans.

“In the past … we had talks for humanitarian reasons with Americans over (swapping) some (American) prisoners with Iranian prisoners jailed in the U.S. and it had positive results too,” he said.

Last week, State Department spokesman Mark Toner had said American officials at the meeting had “called on Iran to immediately release these U.S. citizens so they can be reunited with their families.”

Dual nationals in detention have been used as bargaining chips in negotiations with the West. Under Iranian law, they are not entitled to consular support.

We can only hope the Trump administration can force their release without having to pay Iran billions in cash or release terrorists in exchange, since past concessions have only emboldened the mullahs to do more.