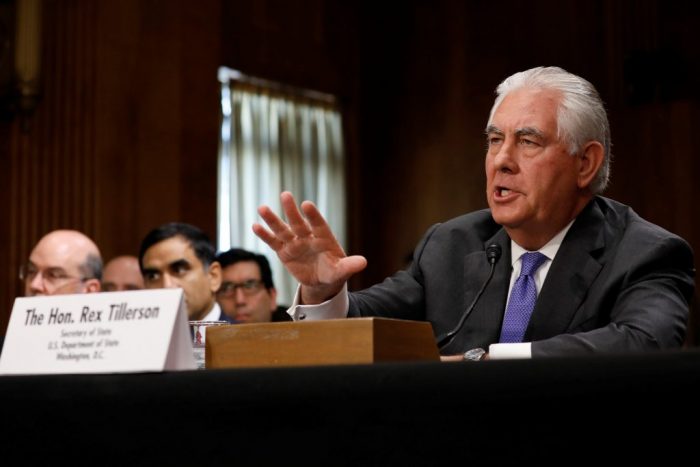 U.S. Secretary of State Rex Tillerson gave testimony to the House and Senate Foreign Affairs Committees this week in detailing the State Department budget priorities for the upcoming year. While the bulk of his testimony concerned the issues such as North Korea and Russian relations, Tillerson made a few comments on Iran that engendered a full-fledged response from the Iran lobby.

While the majority of news media gave ample coverage to Tillerson’s testimony concerning Russia, he was asked a question regarding Iran by Rep. Ted Poe (R-TX), a noted critic of the Iranian regime and the mullahs who control it, that drew scant attention, but clearly worried the Iran lobby.

Tillerson was asked about future plans to enter into negotiations with the Iranian regime and he replied the administration had no immediate plans to do so and expressed support for elements within Iran working towards regime change and a transition to democracy in Iran.

It appears that the concept of promoting democracy in Iran strikes mortal terror in the hearts of Trita Parsi and his fellow travelers at the NIAC.

Darius Namazi at NIAC whipped out a statement condemning Tillerson’s remarks and taking a swipe at Iranian dissident movements, namely the Mujahedin-e-Khalq (MEK), which had supporters in attendance at the hearings to express support for democratic change in Iran.

Poe asked Tillerson whether the U.S. supports “a peaceful regime change” and whether it is U.S. policy “to lead things as they are or set up a peaceful long-term regime change.”

Namazi claimed that Tillerson implied that it was U.S. policy to move toward supporting regime change, stating the U.S. would “work toward support of those elements inside of Iran that would lead to a peaceful transition of those governments.”

Only the NIAC would have a problem with the concept of a “peaceful regime change,” but that is par for the course for the Iran lobby.

The NIAC contends that any effort to force regime change would naturally be tantamount to an open declaration of war on the mullahs in Tehran, which is understandable considering the last time there was a mass effort for regime change following the disputed 2009 presidential elections, protests were brutally put down and innocent Iranians killed in the streets.

Of course, Namazi accuses the MEK of seeking to “violently overthrow the Iranian government,” as part of the Iran lobby’s continuing efforts to denigrate any organized opposition movement to the mullahs’ rule.

Namazi goes on to criticize Tillerson’s statements that the administration had no plans to negotiate with Iran on a range of issues such as the situations in Syria and Yemen, but Tillerson only correctly pointed out that granting Iran a seat at the bargaining table when it is the key agent causing the chaos in the first place was a pointless exercise.

According to Tillerson, “The Iranians are part of the problem…They are not directly at the table because we do not believe they have earned a seat at that table. We would like for the Iranians to end their flow of weapons to the Houthis, in particular their flow of sophisticated missiles to the Houthis. We need for them to stop supplying that, and we are working with others as to how to get their agreement to do that.”

These are not unreasonable sentiments, but apparently for the NIAC they are totally unreasonable.

Not that their efforts mattered since the Senate passed new sanctions on the Iranian regime by near unanimous margins in a further sign that the U.S. is moving past the failed policies of appeasing the Iranian regime under the Obama administration.

The Senate passed the sanctions bill by a 98-2 margin. The bill places new sanctions on Iran over its ballistic missile program and other activities not related to the international nuclear agreement reached with the United States and other world powers.

To become law, the legislation must pass the House of Representatives and be signed by Trump. House aides said they expected the chamber would begin to debate the measure in coming weeks, according to Reuters.

The Iranian regime itself didn’t waste time in attacking Tillerson’s assertions that Iran has “aspirations of hegemony in the region.”

Qassemi went on to blame a history of U.S. “meddling in Iran in different forms” since the 1950s, saying the policy has only brought about “defeat and global shame” for Washington.

For all the bombastic the Iranian regime and its allies are hurling, the plain truth is that the U.S. is moving quickly and broadly on a number of fronts to rein in Iranian expansionism and militancy.

Congress is seeking new authorities that would enable it to expose and crack down on an Iranian state-controlled commercial airline known for transporting weapons and terrorist fighters to hotspots such as Syria, where Iranian-backed forces have begun launching direct attacks on U.S. forces in the country, according to new legislation obtained by the Washington Free Beacon.

Congressional efforts to expose Iran’s illicit terror networks more forcefully come as U.S. and European air carriers such as Boeing and Airbus move forward with multi-billion dollar deals to provide the Islamic Republic with a fleet of new airplanes, which lawmakers suspect Iran will use to amplify its terror operations.

The new sanction legislation targets Iran’s Mahan Airlines, which operates commercial flights across the globe while transporting militants and weapons to fighters in Syria, Yemen, and other regional hotspots.

A crackdown on Mahan could indicate that Congress is more seriously eyeing ways to thwart Iran’s mainly unchecked terror pipeline in the region.

We breathlessly await the NIAC’s next bout of hyperbole.