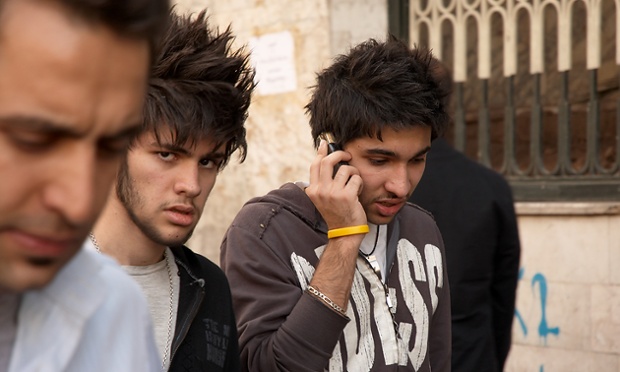 The Iran lobby, led by the squawking voices of luminaries such as Trita Parsi and Reza Marashi of the National Iranian American Council and so-called journalists Jim Lobe and Ali Gharib, promised a new moderate Iran after the nuclear deal was announced, which was met with loud demonstrations and honking car horns on the streets of Tehran by Iranians hoping for a new shift in the regime’s policies moving forward.

That hope has slowly been strangled and has led to widespread disillusionment among ordinary Iranians, especially Iranian youth who face appalling high unemployment rates, are subjected to internet cyberwalls and live in constant fear of arrest and torture for engaging in counter-revolutionary acts such as posting photos on Instagram.

Their hopes had been bolstered by the false promise offered by the election of Hassan Rouhani, who has become the false face of a regime which has no intention of changing course. Reuters took a deeper look at the dissatisfaction running through Iranian society and the lack of progress towards the moderate promises made by Rouhani’s ascension.

Rouhani won the presidency in 2013, bolstered by the support of many women and young people who were encouraged by his comments that Iranians deserved to live in free country and have the rights enjoyed by other people around the world, said Reuters.

“I am not going to make the same mistake twice. I have decided not to vote,” said Setareh, a university graduate in the northern city of Rasht. “I voted for Rouhani – was he able to improve my situation? No.”

According to the Reuters reporting, Rouhani’s supporters hoped that his election victory would lead to social change in country where women have lesser rights than men in areas including inheritance, divorce and child custody and are subject to travel and dress restrictions, and strict Islamic law is enforced by a “morality police.”

But rights campaigners say there have been little, if any, moves to bring about greater political and cultural freedoms as the president has focused on striking the nuclear accord with world powers to end the international sanctions that have crippled Iran’s economy with no guarantees the financial windfalls would benefit the consumer economy.

Reuters found significant irony among young Iranians that Rouhani’s promises to loosen Internet restrictions have not been met. Access to social media remains officially blocked, though Rouhani and Khamenei have their own Twitter accounts.

This has been a particular grievance among those under 30, who represent more than two-thirds of the 78 million people living in Iran and were born after the 1979 Islamic revolution.

“I am not going to vote. What is the use of voting? My hopes are shattered,” said a 27-year-old engineer in Tehran, who refused to give his name.

The situation for Iranian women remains abysmal and shows no signs of improvement after parliamentary elections. Under regime law, men can divorce their spouses far more easily than women, while custody of children over seven automatically goes to the father.

Women have to get permission from their husbands to travel abroad. They are obliged to cover their hair and the shape of their bodies, their testimony as a legal witness is worth half that of a man’s and daughters inherit half of what sons do.

“What will change if I vote?” said Miriam, 26, who could not win custody of her eight-year-old son after getting divorced in the central city of Isfahan. “Can reformist candidates give me equal rights?”

Support for that nuclear deal may also appear to be cracking based on a new poll conducted by the University of Maryland’s Center for International and Security Studies in January. Another question asked whether the deal was a victory for Iran or a defeat for Iran. In August, 36.6 percent of Iranians said it was a victory, but that number has now dropped to 27.4 percent. Interestingly, the numbers of Iranians who felt it was a defeat also dropped. Instead, a third answer – that the deal is beneficial for both Iran and the world powers that agreed to it – gained adherents, rising 43 percent of Iranians to 54 percent between August and January.

Both are significant erosions of confidence by the Iranian people in what they believe from the Mullah’s regime and the fact they do not see any of the alleged benefits touted by the mullahs flowing to them and are unlikely to see any as the regime focuses on business deals benefitting industries controlled by the Revolutionary Guards Corps.

That focus on benefits for the ruling elites was highlighted by criticisms voiced by regime publications affiliated with the IRGC which criticized a number of the contracts signed by Rouhani on his recent European tour in an effort to justify the removal of almost 90 percent of candidates from election ballots who might be viewed as moderates or even outright dissenters from being able to run for office.

That militant and aggressive behavior was reinforced by comments made by the head of the regime army in the Fars news agency in he promised the regime would continue development of its ballistic missile program even though the international community has widely condemned it as a violation of existing sanctions, according to Reuters.

“Iran’s missile capability and its missile program will become stronger. We do not pay attention and do not implement resolutions against Iran, and this is not a violation of the nuclear deal,” Fars quoted commander-in-chief Ataollah Salehi as saying.

He was referring to Iran’s deal with world powers last year to curb a nuclear program that the West feared, despite Tehran’s denials, was aimed at acquiring atomic weapons.

But even as the Iranian regime was making these threatening statements, its foreign minister Javad Zarif was demanding that the U.S. make clear a public pledge not to penalize any European banks engaging in trade with the regime, according to Reuters.

Many foreign banks are cautious about resuming trade with Iran following January’s nuclear deal because they fear being caught up in ongoing U.S. sanctions.

Although world powers lifted many crippling sanctions against Iran in return for the country complying with a deal to curb its nuclear ambitions, some restrictions remain in place

Washington still prevents U.S. nationals, banks and insurers from trading with Iran and also prohibits any trades with Iran in U.S. dollars from being processed via the U.S. financial system.

This is a significant complication given the dollar’s role as the world’s main business currency.

European banks are also cautious – with some, including Deutsche Bank, remembering past fines from U.S. regulators for breaking sanctions, Reuters said.

European businesses should be wary of jumping too quickly back in bed with the regime given its aggressive actions and engagement in escalating conflicts in Syria, Iraq and Yemen, especially since the upcoming parliamentary elections will be just another act of political theater with no real benefit or relief for the Iranian people.