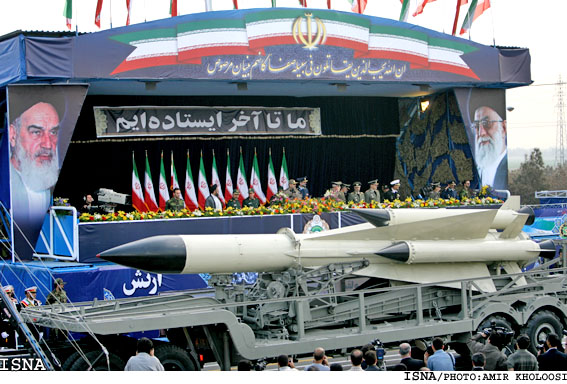 The Iran lobby has offered up a variety of excuses for the actions and militant behavior of the Iranian regime ranging from pleas of peace-loving intent and political moderation to feigned ignorance and indignation over escalating human rights abuses and proxy wars throughout the Middle East.

One of the newest lines being trotted out by the Iran lobby is the absurd notion that Iran has never started a war.

A scholar at the American Enterprise Institute, took that claim to task in a column for Commentary Magazine.

He showcased comments made by Iranian regime apologists Juan Cole, a University of Michigan professor, and retired Congressman Ron Paul who said “There’s no history to show that Iran are aggressive people. When’s the last time they invaded a country? Over 200 years ago!”

“Iran has not launched an aggressive war in modern history (unlike the US or Israel), and its leaders have a doctrine of ‘no first strike.’ This is true of Supreme Leader Ali Khamenei, as well as of Revolutionary Guards commanders,” said Cole.

The Iranian regime knows when it has got a good thing going. Foreign Minister Mohammad Javad Zarif yesterday tweeted, “Iran hasn’t attacked any country in 250 years. But when Saddam rained missiles on us and gassed our people for 8 yrs, no one helped us.”

These are absurd comments when looked at in the context of what the mullahs have wrought since the Islamic revolution in 1979. The mullahs preferred method of aggression is to use proxies, either in the form of terrorist groups such as Hezbollah or local militias such as in Iraq and Yemen.

Hezbollah alone has served as a conduit of death and destruction for decades by carrying acts of terror either under the direction of or direct cooperation with Revolutionary Guards and Quds Forces personnel. In the most recent Syrian conflict, senior Iranian commanders have been in the field directing combat operations and even getting killed.

It’s noteworthy that Syria never posed a direct conflict with Iran, not even sharing borders, but the mullahs felt it necessary to engage in armed conflict there and even expanded it by calling for Russia to join in the bloodshed and widen the war.

Since the revolution, Iran has been involved in military campaigns in:

Not exactly a record of pacifism, but certainly in line with the extremist nature of the regime and the duplicitous nature of the excuses made by the Iran lobby.

Another example of that stranger than fiction messaging came when regime-controlled media blasted the report issued by Ahmed Shaheed, the UN special rapporteur for human rights in Iran, which blistered the regime for appalling human rights abuses, including a near historic 1,000 executions in 2015 and a distressing willingness of the mullahs to kill children and women.

He said that the report is “imbalanced” and has been prepared based on “unreliable information.”

Those criticisms fell on deaf ears though as the Committee to Protect Journalists joined 34 other organizations in calling on the U.N. Human Rights Council to vote in favor of renewing the mandate Shaheed’s term as special rapporteur. The vote is scheduled to take place during the 31st session of the council, which ends March 24.

In the joint letter, the organizations drew attention to the range of “serious and systematic violations” of civil and political rights in Iran, as well as the need for the council to urge Iranian authorities to implement long overdue legal changes that would address the grievances of those who have borne the brunt of human rights abuses.

Journalists and other political and civic actors are “arbitrarily detained and given increasingly harsh prison sentences, often for trumped-up national security-related charges,” the letter said. Iran is one of the leading jailers of journalists, with 19 behind bars as of CPJ’s annual prison census on December 1. Ahead of last month’s legislative elections, journalists were arrested and at least one publication was banned, CPJ research shows.

In the meantime, even the modest “moderate” election wins hailed by the Iran lobby were under assault as several women who won seats were being verbally attacked for making comments deemed threatening to the regime, such as criticizing laws mandating women wear traditional veils and coverings.

All of which provides additional proof that any hope of moderation offered up by the Iran lobby is never really going to happen. This was put on bold display when Reza Marashi, research director for the National Iranian American Council, published a plaintive editorial in Huffington Post pleading for the release of his fellow regime supporter, Siamak Namazi, who was arrested and imprisoned by the regime and not part of the prisoner swap resulting from the nuclear deal.

“After finishing his graduate studies abroad, he again returned to Iran in 1999, this time as a consultant. Most people in his shoes returned to try and make a quick buck as a big fish in a small pond. Not Siamak. He helped run a world-renowned consulting firm – staffed predominantly with Iranian-born citizens – that facilitated badly-needed foreign investment from blue-chip multinational corporations,” Marashi said.

Unfortunately, Marashi neglects to mention how that firm, Atieh Consulting, become embroiled in regime politics since his family had deep connections to various parts of the regime’s leadership and actively cooked up the idea of creating an Iran lobby in the U.S. through the NIAC to help advocate for the lifting of international sanctions and far from being a selfless act, Namazi and others had hoped to position themselves to serve as middlemen to funnel foreign investment back into the regime and steer it towards their political allies as described in several investigative pieces.

It is also noteworthy how Marashi did not write similar heartfelt pieces on behalf of other Americans held captive in Iranian prisons such as Amir Hekmati or Saeed Abedini or endured years of torture in Iran.

It would certainly be interesting to see Marashi put his feet where his mouth is and go to Iran himself to plead with the mullahs and see if he can avoid a lengthy prison term as well as another political pawn for them.