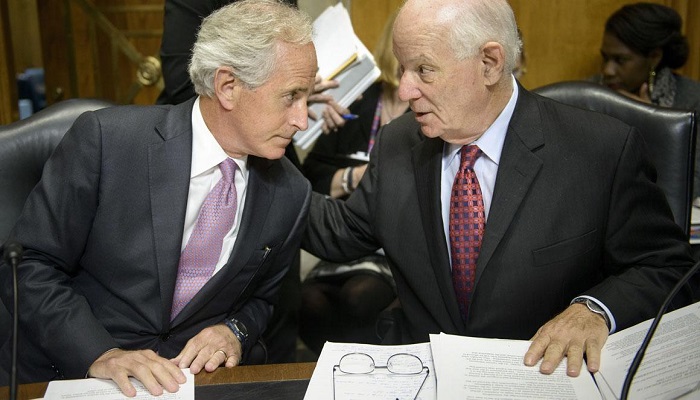 Iran’s lobbying machine, led by the National Iranian American Council, failed yet again to sway members of Congress from supporting the Corker-Menendez bill which passed unanimously out of the Senate Foreign Relations Committee and grants Congress a voice in negotiations on the Iran nuclear accord.

The bill now goes to the full Senate where a veto-proof majority is anticipated to approve it. Recognizing the inevitable, the White House signaled the President would sign the bill after gaining some adjustments to the timeline to Congressional review and approvals of any deal negotiated.

The NIAC was left sputtering with a statement denouncing the bill, but powerless to affect its’ almost certain passage. What does this portend for the future of the NIAC and other regime apologists?

It proves once again that no amount of spin can cover up the  harrowing stories coming out of the Mideast of terror groups supported by Iran’s mullahs wreaking havoc across the region, including beheadings, kidnappings, mass murders and government overthrows.

The bill passed out of committee would mandate the administration send the text of a final accord, along with all classified material, to Congress as soon as completed. It halts the lifting of any economic sanctions during congressional review and culminates in a possible vote to forbid lifting congressionally imposed sanctions in exchange for dismantling much of Iran’s nuclear infrastructure.

The provisions are direct repudiation of demands made by Iranian regime’s leaders including Ali Khamenei, Hassan Rouhani and Javad Zarif who all denounced American versions of the framework agreement and demanded lifting of all economic sanctions immediately upon completion of a deal; not just American sanctions, but also European Union and United Nations sanctions.

Quite simply, the American people will have their say over whether or not Iran’s mullahs can be trusted to abide by any agreement.

It is a triumph of democracy over an autocratic theocracy, but it only sets the stage for what will likely prove to be another long summer filled with false hopes, clashing views and endless updates leading to nowhere.

Iran’s mullahs have followed a specific negotiating plan aimed at stalling any final agreement for as long as possible, giving the regime time to destabilize the region through direct military action in Iraq and through proxies in Syria, Lebanon and Yemen, in an effort to force the hand of Western nations into giving in to Iran’s demands in the false hope of enlisting Iran in quelling the very conflicts it has started.

Ultimately though the regime’s plans will fail just as its lobbying machine has failed because it cannot hide its barbarism, nor resist the pathological desire to inflict pain, suffering and death on all those it finds objectionable, such as other Muslims, Christians, Jews, women, gays, kids surfing the Internet, bloggers, artists, journalists, etc.