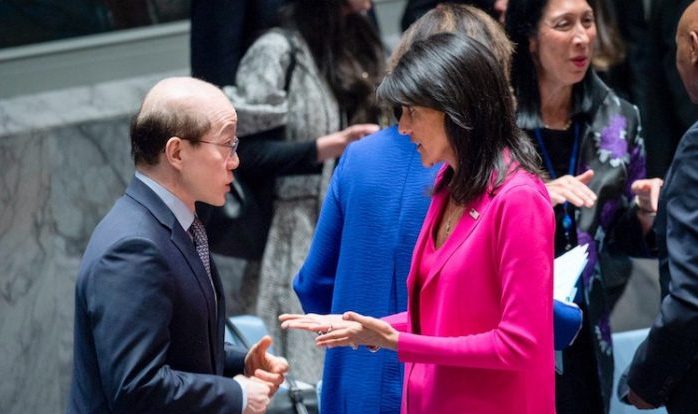 Less than 24 hours the Iran lobby was crowing about the Trump administration’s decision to re-certify the Iranian regime in compliance for another 90 days with the nuclear agreement, it went on the offensive as it faced a barrage of explicit statements from high-ranking officials denouncing the Iranian regime including United Nations ambassador Nikki Haley, Defense Secretary James Mattis and Secretary of State Rex Tillerson.

All three, top foreign policy and defense officials made the same statement that the source of trouble in the Middle East today was based in Tehran and that only a policy comprehensively dealing with all aspects of the Iranian regime was going to work moving forward in returning stability to the region.

For the mullahs in Tehran and their Iran lobby supporters, the objective has always been to divide and conquer the issues the rest of the world finds objectionable towards Iran; such as its support for terrorist groups like Hezbollah and dictators like Bashar al-Assad in Syria, as well as a dismal human rights record that would make Joseph Goebbels proud.

Which is why the Iran lobby’s cheering for the 90-day compliance notice had a lifespan of a gnat since it was merely a formality while the administration conducts a national security review of policy towards Iran.

But that didn’t stop the National Iranian American Council from bloviating like a water buffalo in heat.

“It’s a significant contradiction to first come out and say that the Iranians – contrary to all of their claims that Iran would be cheating – actually is living up to the deal only to come out the day after and saying, well, we hate the deal anyways and signaling that the U.S. might actually be walking away from the deal, unless of course the aim is to get rid of the deal without the U.S. having to pay the cost for it, meaning instead of the U.S. violating the deal directly by not renewing these sanctions waivers, killing the deal by escalating tensions in Yemen and elsewhere in the region and hoping that that will force the Iranians out of the deal,” said Trita Parsi, NIAC president on NPR.

Parsi is trying to have it both ways in separating the nuclear from other issues such as human rights or Iran’s meddling in wars raging in Syria and Yemen, but he deliberately skips over the most glaring consequence of the nuclear deal which is because we separated these issues, the mullahs were free to act without fear of reprisal in their ambitions for Syria or in the crushing of dissent at home.

The cold hard truth is that these are all connected issues like the strings of a spider web; the web would never succeed or exist unless all the strands were connected and working together.

The Iranian regime, for lack of a better comparison, is a legal criminal enterprise on a national scale. It concentrates power ruthlessly at the very top, uses the judicial system and religion to enforce disciple and stifle dissent while its military owns just about every industrial activity and skims off the top to line the pockets of the elites.

It’s like the Sopranos on steroids, except Ali Khamenei isn’t seeing a shrink unfortunately.

Of course other members of the Iran lobby weighed in too as Reza Marashi from the NIAC penned a ludicrous piece on TopTopic in which he claimed the European Union was galvanized and united in supporting the Iranian regime.

Unfortunately, yesterday’s terror attack on the Champs-Elysees in Paris only reinforced a growing uncertainty throughout a Europe that has been rattled by Islamic extremists attacks in Berlin, Brussels, Paris and elsewhere.

We’re sure Marashi wishes for the good old Obama days when the NIAC could pick up the phone and call the White House and find a receptive audience, but it and Europe and finding that shaping policy in the White House now is not about lobbying, but about answering the central question the Obama administration never bothered to ask: “How do we rein in Iranian excesses across the board?”

Parsi reinforced that complete lack of understanding in an editorial in the New York Times in which he cited “a number of potential land mines on the near horizon. The first is in Congress, where a bipartisan effort is underway to introduce new sanctions on Iran that, despite the protestations of the legislation’s sponsors, would violate the terms of the nuclear agreement by adding new conditions onto the deal.”

Once again Parsi ignores the inconvenient truth for the Iran lobby which is that in their mind anything “new” in terms of sanctions levied against the Iranian regime would be considered a violation of the terms of the agreement, even though the agreement was purposely devoid of any clauses or mention of issues such as human rights.

Their twisted pretzel logic has them boxed in where now they are forced to denounce any and all efforts to sanction Iran as a threat to the regime. If Iranian warplanes dropped sarin gas on Sunni refugees in Iraq, Parsi and his colleagues would undoubtedly argue against any sanctions as a violation of the agreement; a convenient catch-all.

It’s also hilarious Parsi raises the prospect of a “moderate” Hassan Rouhani being defeated at the ballot box in next month’s elections since he ignores Iran’s long history of rigging every election. In fact, the regime’s Guardian Council only yesterday tossed former president Mahmoud Ahmadinejad off the ballot after much fanfare of him registering as a candidate.

In Iran, you don’t get on the ballot unless you are expected to get the blessing of the mullahs.

The most absurd comment Parsi makes is the assertion that if the U.S. reneges on the deal, Iran will undoubtedly move forward with its nuclear ambitions.

We hate to break it to the regime lackey, but the deal—by Parsi’s own admission—was never designed to halt Iranian nuclear work, only slow it down by a decade before the much ballyhooed “breakout period,” but even that has been whittled down by most analysts to just a few years.

All of which makes the statement issued by the NIAC in response to Secretary Tillerson’s remarks the other day even more laughable.

“There is little room to interpret this statement as anything less than a proclamation of the Trump administration’s intent to scrap the nuclear deal and reset the United States on a path to war,” said the NIAC.

Have they not been paying attention to Syria, Iraq, Yemen or Bahrain lately?