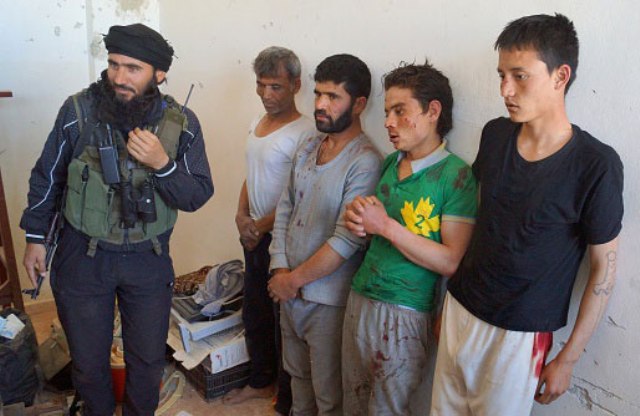 As the world convenes in Geneva to discuss the chaos that is the civil war in Syria, the Iranian regime continues to recruit and export thousands of undocumented Afghans to fight in Syria on behalf of the regime of Bashar al-Assad in a continuation of the unconditional support the mullahs in Tehran have given the Syrian dictator according to Human Rights Watch and the ongoing genocide.

Human Rights Watch in late 2015 interviewed more than two dozen Afghans who had lived in Iran about recruitment by Iranian officials of Afghans to fight in Syria. Some said they or their relatives had been coerced to fight in Syria and either had later fled and reached Greece, or had been deported to Afghanistan for refusing. One 17-year-old said he had been forced to fight without being given the opportunity to refuse. Others said they had volunteered to fight in Syria in Iranian-organized militias, either out of religious conviction or to regularize their residence status in Iran.

“Iran has not just offered Afghan refugees and migrants incentives to fight in Syria, but several said they were threatened with deportation back to Afghanistan unless they did,” said Peter Bouckaert, emergencies director at Human Rights Watch. “Faced with this bleak choice, some of these Afghan men and boys fled Iran for Europe.”

The Iranian regime hosts an estimated 3 million Afghans, most fleeing violence and persecution in Afghanistan; only 950,000 have formal legal status in Iran as refugees. The regime excludes the remainder from accessing asylum procedures, leaving many who may want to seek asylum undocumented or dependent on temporary visas and at the tender mercies of the mullahs.

HRW went on to document several instances of minor children being coerced into service and fight in Iranian-controlled and led militias in Syria. The Iranian regime, already cited by Amnesty International for executing juveniles in Iran, has adopted a similar attitude when it comes to using children as cannon fodder.

These practices by the Iranian regime have drawn broader attention in the wake of Hassan Rouhani’s European tour which was met by large demonstrations by thousands of Iranian dissidents and human rights groups in Paris.

Many Iranian expatriates and former victims of the regime participated in elaborate street performances and exhibitions to portray the human rights violations that are still running rampant in the country to this day. 2,200 people have been put to death during his tenure, most of them for non-violent offenses, and many for vague, political crimes like “insulting the Prophet” or “enmity against God”. Western diplomacy to solve this problem is missing- in what can only be called criminal negligence, according to the National Council of Resistance of Iran, a leading dissident group.

Even against the backdrop of business deals being announced and praise from the Iran lobby about the “moderate” turn by the regime, the mullahs continued to crackdown in advance of upcoming parliamentary elections, but are not satisfied with just arresting Iranians as they arrested a former BBC journalist on the eve of visit by regime foreign minister Javad Zarif to London.

Washington Post reporter Jason Rezaian must be feeling a case of déjà vu hearing this news.

Bahman Daroshafaei was taken to jail on Wednesday after facing a series of interrogations, according to sources in Tehran. Daroshafaei is of dual Iranian-British nationality and is a former employee of the BBC’s Persian service according to the Guardian.

Zarif is due to participate at a high-profile summit on Syria in London on Thursday, in the first visit to the UK by an Iranian foreign minister in 12 years. It comes after Britain and Iran reopened embassies in their respective capitals last August following the landmark nuclear deal.

The Iranian regime appears to have an active campaign that involves harassing BBC Persian journalists directly or indirectly by summoning their family members who live in Iran. A number of staff members at the BBC’s Persian service have been victims of false allegations of sexual misconduct, duplicated Facebook accounts, fake blogs and online identity theft designed to discredit them, this is while BBC Persian service is considered a program that mainly advocates an appeasement policy towards Iran and is actually referred to by most Iranian’s as “Ayatollah BBC” for its pro mullah’s programs.

The Guardian took the regime to task in an editorial in which it condemned the regime’s human rights violations, saying:

“Iran may have a president with a “moderate” profile – one whose smooth approach comes as a relief after the Ahmadinejad years – but that does not mean the authoritarian nature of the regime or the objectives of its foreign policy have changed. Iran still ranks as one of the most repressive states in the world, and there has been no improvement.

“The government was probably looking for a public relations bonus in the west when it recently released a number of journalists, but the statistics tell another story: in 2015 Iran executed at least 830 people, including juveniles, many for non-violent crimes. The security services continue to harass and detain activists, writers and journalists.

“Nor has Iran become in any way more “moderate” in its behaviour in the Middle East. In Syria, Iran’s militias and Republican Guards are direct participants in the war crimes that the Assad regime inflicts on its own population. Iran’s close ally Hezbollah played a key role in the siege of Madaya, where children died of hunger as a result, and it is part of similar operations elsewhere.”

It is encouraging to see more international media seeing past the charades offered by the Iran lobby and exposing the horrors that are still continuing in Iran.