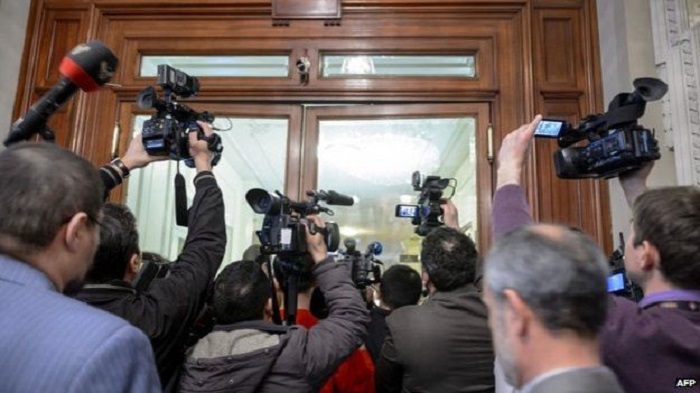 Will March 31st bring about a capitulation to Iran’s mullahs or will common sense and courage prevail in the face of naked aggression and terror? We will soon find out, but what is clear is that the Iran regime’s lobbying and PR allies are working overtime in a last ditch attempt to save the mullahs from what could be another defeat at the bargaining table after three fruitless years of talks.

Rosie Gray of BuzzFeed filed an interesting and illuminating story on the lobbying and spinning efforts being put on by operatives of the National Iranian American Council. Well-known regime apologists Trita Parsi and Reza Marashi have been near constant figures in the hallways, bars, lounges and lobbies of the hotels where talks have been taking place in Switzerland.

With all the time they’ve been spending there, you might think they’re just trying to garner more frequent flyer miles, but their ambitions are deadly serious; trying to hoodwink the international media into believing Iran’s mullahs are a lovable bunch and to gloss over the rapid conquest of four of Iran’s neighbors by Iranian proxies and terror groups.

As Gray puts it “Marashi and Parsi are often well-informed on the details from the negotiations and seen as close to the Iranian negotiating team as well as to the American side.”

All of which strikes many as more evidence of the close coordination between the NIAC and its masters from Tehran who are obviously supplying them with talking points, key details about the negotiations and key messages to deliver to the media. It’s an ironic situation since the Obama administration has worked hard to keep details from leaking and providing any specific information to Congress or the American people.

But the façade of the regime’s public face took another hit when Amir Hossein Motaghi, a close media aide to Hassan Rouhani, mullah’s president, sought political asylum in Switzerland after traveling there for the talks.

Motaghi took the opportunity to go on an opposition channel, to explain his decision as well as shine a light on the techniques the regime uses in its PR campaign, including sending accredited Iranian journalists who are in fact agents of the regime ensuring only approved news is sent back home for domestic consumption.

So while Parsi and Marashi continue to prowl the hotel bars to ply their wares on journalists, it is worth noting that their efforts in the U.S. have largely fallen on deaf ears as Congress prepares to engage the White House if a framework comes out these talks. A veto-proof, bipartisan majority in the House has already signaled its intent to scrutinize any deal and withhold lifting any economic sanctions until it reviews every last detail.

Iran’s mullahs know this might be their final last gasp for relief from economic sanctions which is why they are keeping Parsi and Marashi strolling the bars and hallways like a pair of cads looking to pick up coeds after closing hours.