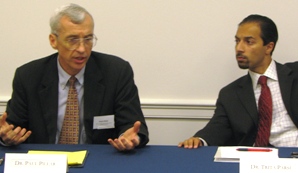 We’ve already chronicled recent efforts by the National Iranian American Council to try and save the flawed Iran nuclear agreement with a flurry of press releases, editorials and social media posts in an attempt to attack everything from President-elect Donald Trump’s tweets to his Cabinet selections.

Not to be outdone, the other leader in the Iran lobby stepped up the plate with another media blitz by the Ploughshares Fund, which sent out its own editorials in an effort to dredge up the same old arguments similar to the arguments used by the Iran lobby during the run up to the nuclear agreement last year in which groups such as Ploughshares and NIAC tried to portray anyone opposed to the deal as a militaristic hawk hell bent on carpet bombing Iran.

In the year since the deal was approved, it is ironic to see the Iranian regime being the one to carpet bomb cities in Syria and funnel arms to terrorist proxies and militias in Iraq and Yemen. Of course Ploughshares offers no editorials condemning the cycle of war and violence the Iranian regime feeds and nurtures.

Paul Pillar, a former intelligence officer that has been penning on behalf of the Iranian mullahs in various occasions, joined at the hip to the Ploughshares Fund, offered up one such editorial in the National Interest in which he pedaled the same old idea that anyone critical of the Iran nuclear deal was a neo-con war hawk.

Pillar again raises the specter of the Iraq war as a harbinger of war with Iran in order to try and scare readers as he bangs the drum against President-elect Trump.

“None of this is a prediction that there will be such a war.  But the danger of one is greater now than it was before November 8th and the appointments that followed.  Vigilance is required to avoid further steps that would increase the chance of a war,” Pillar adds. “Also to be watched for are any moves, such as aggressive U.S. military operations in the Persian Gulf, that could become steps down a slippery slope to conflagration.”

That last statement by Pillar really demonstrates how bought in he is for Iranian regime, when he makes no mention of the devastation Iranian regime’s military actions in the region have caused.

Unlike what Pillar says, the aggression is coming from Iran.

But Pillar wasn’t the only Iran lobbying ally to get in on the act, Tytti Erästo, a fellow at Ploughshares, also offered up her own editorial at the National Interest as well trying to sell the idea that Trump needs the Iran nuclear deal to engage with Russia and North Korea.

She tries to make the case that North Korea would somehow view an intact nuclear deal as the appropriate pathway since it would demonstrate the benefits of diplomacy.

Let’s think about that idea carefully for a moment:

Yes, that sounds like a wonderful template of how Iran can positively influence North Korea!

And how could nuclear deal influence anyone, particularly since we are talking about a flowed agreement with no teeth that provides ample exemptions and waivers for violations and lift all economic sanctions without the need for compliance monitoring?

In fact, her statement reflects a key component of all the Iran lobby’s positions which is that the International community bears the burden for compliance and any failure in the agreement must stem from the U.S. and others not from anything the Iranian regime did.

It is the same frivolous thinking that paved the way for a badly flawed deal which led us to the crises the world currently faces.

While such efforts by the Iran lobby reveals the weak position and the fear the mullahs have, it also proves that the right policy towards Iran is and has always been a firm policy that should hold the Iranian regime finally accountable for its actions and not the other way around.