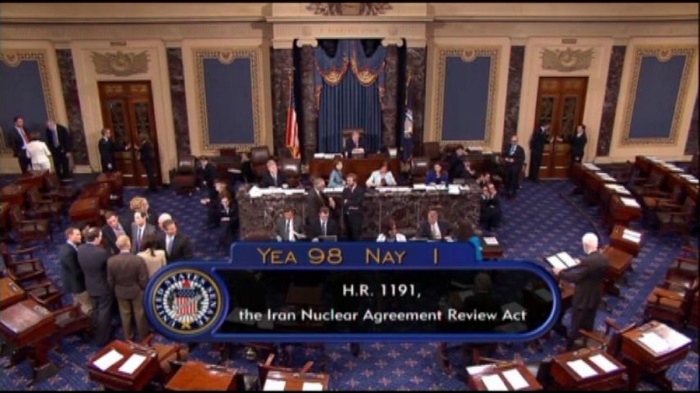 The Senate voted by a whopping 98-1 margin to approve the Corker-Menendez bill giving it 30 days to review and approve or vote down any nuclear agreement negotiated with the Iran regime and the P5+1 group of nations; affirming the utter failure by Iran’s lobbyists to halt the drive for Congressional review.

While the passage of this landmark legislation – where it is headed towards a similar passage in the House – represents the hard work of a bipartisan coalition of legislators to wedge Congress into the Iran nuclear talks, it boldly shows the ineffectual nature of the Iran lobby, especially the National Iranian American Council led by Trita Parsi.

The NIAC has loudly opposed any effort to allow Congress approval of any deal. When the Corker-Menendez bill was first introduced, NIAC issued a quick denouncement warning that “under this legislation, Congress would delay the implementation of any nuclear deal reached with Iran while deciding whether to permanently remove the President’s powers to execute a deal.”

The NIAC rightly recognizes that allowing Congress to approve any deal would bring the regime’s conduct into the equation and allow a public debate on whether or not a regime involved in proxy wars, terrorist activities, brutal human rights abuses and provoking sectarian civil wars is trustworthy enough for an agreement.

A recent NBC News poll found 68 percent of Americans believed Iran was either not too likely or not likely at all to abide by a nuclear agreement. Senators are not dumb, they can read a poll better than anyone else and these types of numbers compelled them to ignore the complaints of the Iran lobby and opt for further oversight.

But the legislative win wasn’t complete. There still remained within the bill some troubling provisions outlined by the Washington Post and decried by co-sponsor Sen. Robert Menendez (D-NJ) including “provisions that may wind up in a final deal — affording Iran immediate sanctions relief (‘a signing bonus’), allowing Iran to keep working on advanced research, reliance on the faulty concept of snapback sanctions, the failure to secure anytime/any place inspections, Iran’s refusal to come clean on past military dimensions of the program and excluding terrorism from sanctions consideration.”

But Sen. Menendez signaled that this bill would not be the final word on the Iran regime’s conduct, promising additional legislation.

“I stand ready to work with colleagues immediately on pursuing other concerns such as missile technology, such as terrorism, such as their human rights violations, such as their anti-Semitism, such as the Americans who are being held hostage. And to look at either sanctions or enhanced sanctions if they already exist on some of these elements that we should be considering. That is separate and apart from a nuclear program,” he said.

The NIAC, stinging from the Senate defeat, has turned its attention to the upcoming House vote, where it is also headed to another defeat, placing its hopes in a letter circulated among Democratic House members urging President Obama to stay the course in seeking a deal with the Iran regime. The letter, signed by 150 House members, including six non-voting members from U.S. territories, does not represent enough members to halt an override of a presidential veto.

It is clear that even after a “all hands on deck” mobilization by the NIAC to get enough signatures for the House letter, knowing the overwhelming defeat it faced in the Senate, it still could not muster the 145 House members necessary to sustain a presidential veto and instead attempted to hide the failure by counting the six non-voting members.

The fact that NIAC attempted this pathetic fig leaf did little to hide its waning ability to influence the ongoing nuclear debate.