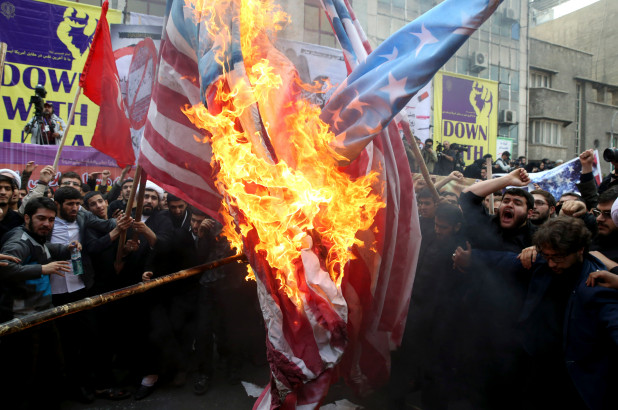 “Iran was not about to capitulate,” said Trita Parsi, the now former head of the National Iranian American Council, in an editorial in The Nation blasting the Trump administration’s efforts to rein in Iranian expansionism.

It is a simple statement by Parsi, but one that reflects years of deep connection between the key Iran lobbyist and his masters in Tehran. Parsi knows the minds of the mullahs better than most and is also the one providing the narrative they wish propagated in the wake of President Trump’s decision to pull out of the Iran nuclear agreement by not re-certifying Iranian compliance with its terms.

His editorial lays out the new terms of the debate the Iran lobby wants to have with the Trump administration and the American media landscape moving forward.

In essence, Parsi argues that:

Unfortunately for Parsi every single one of his arguments have been proven wrong with the passage of time and no thanks to his masters in Tehran who have striven to disprove everything through their own actions.

First and foremost, the impact of economic sanctions was deep and far-reaching and pushed the Iranian regime’s leadership to look for a pathway out. Parsi highlights how the mullahs stepped up their nuclear activities in response to sanctions and credits that as proof that sanctions had no impact, but he misses the point—or more accurately covers the truth—that the mullahs crashed dived their nuclear program to force the issue of negotiations over a nuclear deal in order to gain relief from those sanctions as quickly as possible.

This explains the regime’s adamant demands that the deal be front-loaded with economic relief, such as the immediate release of frozen Iranian assets without oversight or pre-conditions, as well as the immediate sale of Iranian oil back on the open market.

For Iran, its economy was stagnating and its military resembled a shell of itself. And for the regime’s top mullah, Ali Khamenei, the pathway forward was simple: get a deal done as quickly as possible so the regime could begin rebuilding its military.

After the deal was signed, that was exactly what the regime did, going on an epic spending spree with over $100 billion in new orders for everything from new advanced anti-aircraft missile batteries to new jet fighters and main battle tanks.

A little side note that Parsi neglected to mention, prior to the nuclear deal, Iran was prohibited from buying offensive weapons systems, but under the agreement, the regime was free to acquire those weapons which it has put to use in Syria on behalf of the Assad regime.

The most disturbing item never discussed by Parsi and the rest of the Iran lobby is a simple one, which is the mental state of the Iranian leadership.

Any international agreement is predicated on an assumption that both parties are rational, truthful and obligated to the deal, but in the case of the Iranian regime, a religious theocracy is in charge that has little regard for human life and values survival above all else.

Parsi’s argument all fail when you start from the premise that the Iranian leadership has an agenda very different from what he claims. Case in point:

The Iran lobby is left only with two lies in its verbal arsenal. It can only argue that the Trump administration’s true aim with Iran is to seek war but offers no proof.

All of the evidence points to a very different pathway President Trump has chosen. As with the current push for a diplomatic solution to a nuclear North Korea, the strategy towards Iran is to pursue diplomacy and work within the framework of America’s allies; a far cry from the drum beating Parsi is engaged in portraying.

Secondly, Parsi and the rest of Iran lobby is trying to portray U.S. efforts at regime change to topple Iran and install dissident groups he terms as “terrorists.”

It’s another fanciful claim to make since the groups he has singled out such as the Mujahedin-e Khalq (MEK) has publicly staked their future on the idea of a secular, free and democratic Iran in which the people are allowed to make their own choices in free elections.

That hardly sounds like a sinister conspiracy, but then again Parsi is left with little else than making Deep State conspiracy claims.