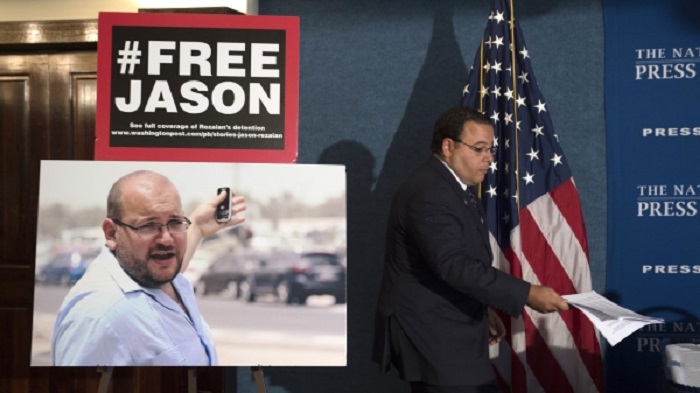 Trita Parsi, the head of the National Iranian American Council and one of the chief supporters and defenders of the Iranian regime, retweeted a cartoon on his Twitter feed which may have been a Freudian slip on his part since, we can deduce it reflects his desperate desire to see the world’s news media and American voters focus on anything else besides the recent spate of terror attacks and the regime’s rampage of human rights violations.

In the cartoon, a man watches television as a reporter yells out “What can we do to lessen the grip of fear from terrorism?” The man hits the remote to turn the TV off with a knowing smirk on his face.

You can almost see Parsi’s face substituted in there as he wishes the world could just turn off their TVs or switch to playing Angry Birds on their smartphones instead of watching photos and videos showing the gruesome aftermath of Paris and Mali as scores of innocent people are killed and injured.

Unfortunately for Parsi and the rest of the Iran lobby, the flow of images won’t stop as terror groups such as ISIS, Boko Harem, Al-Qaeda and others step up their attacks in a sick game of upping the ante on each other. All of these attacks are a constant reminder that the world is not going to be moderate wonderland after the Iran nuclear deal and that the Iranian regime is not a force for stabilizing the Middle East.

Since last July when the agreement was signed, the mullahs in Tehran have engaged in an avalanche of misdeeds that have culminated with the announcement this weekend that the regime formally sentenced imprisoned Washington Post reporter Jason Rezaian to an indeterminate sentence for spying.

“We’re aware of the reports in the Iranian media but have no further information at this time,” Washington Post foreign editor Douglas Jehl said. “Every day that Jason is in prison is an injustice. He has done nothing wrong.

“Even after keeping Jason in prison 488 days so far, Iran has produced no evidence of wrongdoing,” Jehl added. “His trial and sentence are a sham, and he should be released immediately.”

Parsi was able to break away from his normal tweeting defending the regime to comment how sad it was that Rezaian had been sentenced. Of course, Parsi could not be bothered to openly criticize Hassan Rouhani or Ali Khamenei or the mullahs running the revolutionary courts or demand for Rezaian’s release or even mention the scores of other journalists recently rounded up by the Revolutionary Guards in a widespread crackdown on dissent. No, that might have taxed his tweeting duties to criticize opposition for calling for a pause in the influx of Syrian refugees.

It is worth noting the debate over the fate of Syrian refugees is misplaced and efforts by Parsi and others in the Iran lobby to politicize the issue are disingenuous because the more fundamental question is not what to do with Syria’s four million refugees, but why are they leaving and not going back in the first place?

The answer to that is even simpler: the Iranian regime’s unquestioned support of the Assad regime has created the very crisis Parsi and his colleagues are now attacking. It’s an absurd scenario since Parsi and the NIAC have never opposed Iran’s military intervention, nor use of Hezbollah as a terrorist proxy in the bloody civil war.

The plight of Syria’s refugees will not be resolved by policy debates over verification, but rather by cutting the Assad regime from Tehran’s coffers and getting rid of the thousands of Hezbollah, Quds Force, Revolutionary Guards, afghan mercenary and Shiite militia fighters the Iranian regime has put into Syria.

There can be no solution to the dilemma of ISIS, without first resolving how we can get Iran out of Syria and create a long-term peaceful solution that allows the Syrian people to go back home, which could only be possible when Assad is put aside.

Part of that solution will come when Russia determines to what extent it wants to keep its interests aligned with the Iranian regime, especially as President Putin travels to Tehran this week for his first visit in eight years and first since Rouhani was elevated. Already there are signs that Russia’s long-term views of how to fix Syria are diverging from the Iranian regime’s plans.

“Iran was happy to say [to Moscow]: send some planes or [President Bashar al-] Assad is in trouble,” said Mr Phillips. “But longer term, Iran will naturally be uncomfortable. Syria was becoming their fiefdom. They invested a lot and now a bigger fish has come along.”

Views differ on the balance of interests between Moscow and Tehran — including over their respective fidelity to the Assad regime. But one European diplomat said the “complex, sometimes unfathomable” relationship was crucial to untying the knotty international politics over Syria’s conflict.

The very fact that the Iranian regime is a religious theocracy, guided by its devotion to an extremist and warped view of Islam makes any kind of stable relationship with the mullahs virtually impossible as the actions taken by the regime since July can attest to.

How does convicting an American journalist serve the regime’s goals? How does supplying thousands of new fighters to prolong a civil war that has spilled over onto the streets of Paris help reduce tensions? How does ignoring a nuclear agreement by test launching banned ballistic missiles help reassure jittery Arab neighbors to Iran?

In all these cases, the answer remains that Iran’s mullahs are the source of these tensions and Parsi’s vocal support for them and lack of criticism only reinforces the growing perception is nothing more than a paid mouthpiece.