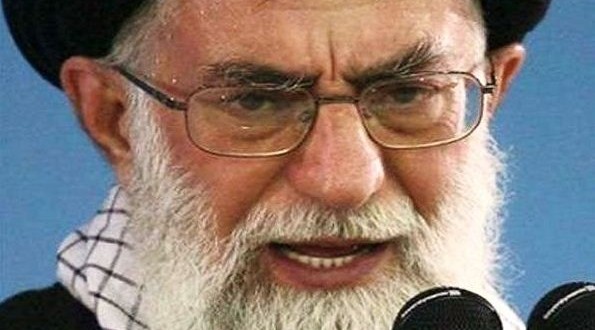 One of the central propaganda tenets of the Iran lobby, especially viewpoints espoused by the National Iranian American Council, Ploughshares Fund and media such as Lobelog is that the proposed nuclear deal with the Iran regime would help improve internal conditions in Iran, strengthen so-called “moderate” factions and lessen the tensions with the West.

But time and time again, the words and actions of the regime’s own leadership have continually undercut, undermined and proved those views to be false and misleading. In fact, the regime’s leader, Ali Khamenei, once again gave another of his patented speeches denouncing the U.S. yet again as the “Great Satan” and vowed that Iran would not negotiate on any topic beyond the just-concluded nuclear agreement.

As the titular head of the government and sole decision-maker on its foreign policy, Khamenei has repudiated virtually all of the key talking points used by regime supporters such as Trita Parsi and Reza Marashi of the NIAC. It is clear that Khamenei was only interested in securing a deal that will allow billions in frozen assets back into the regime, lifts embargoes on trade, finances and arms sales and attaches no conditions on Iran’s human rights violations or support of terror and proxy wars.

But the Iran lobby continues to ignore these statements and plows ahead with its obfuscations. Take for example Parsi’s recent appearance on C-SPAN’s Washington Journal segment where he sidestepped questions about the regime’s ability to continue to spread terror and acquire upgraded military hardware.

The crowning hypocrisy comes when Parsi denounces comparisons of the Iran nuclear deal to the infamous Munich deal with Nazi Germany and labels it “fear propaganda” when he himself has been one of the chief merchants of fear mongering by pushing the “war vs. peace” scenario for passage of the deal.

All of the efforts put forth by the Iran lobby have largely failed on the American people though as shown by the latest Pew Research Center poll released this week which showed a steep decline in support for the deal, falling from 33% approval in mid-July to now only 21% approving the deal just two months later.

Nearly half of Americans (49%) disapprove of the agreement with just three-in-ten (30%) having no opinion.

While the differences between Republican and Democrat approval and disapproval showed a wide gap, crucial independent voters remained opposed to the deal by a significant 47% to 20% margin auguring a contentious election season next year for any candidate supporting the deal.

Pressed further, the survey shows that of those polled who knew a little or a lot about the deal, opposition to the deal grew even larger by more than a two-to-one margin (57% to 27%) which demonstrates that the more people hear about the deal, the more they dislike it, which has to prove troubling for regime lobbyists such as Parsi.

We can only assume that the 2% having a great deal of confidence in the regime’s leaders must be staffers of the NIAC and Ploughshares Fund since that’s about all there is in America.

The fact that Khamenei flatly rejected any further talks with the U.S. on any other topics spells trouble for the Middle East and rest of the world over the next several years. The consequences of a resurgent Iran are already being felt with a Syrian regime now being bolstered by Russian troops and Iran-paid Afghan mercenary troops fighting in an ever-expanding conflict that is causing a refugee crisis throughout Europe and now touching on America.

The Syrian refugee crisis is emblematic of what is truly wrong with the proposed nuclear deal. As Lina Sergie Attar writes in The Daily Beast:

“One of the biggest complaints of supporters of the Iran deal about its critics is that they oppose the deal for no real reason but the sake of opposing. Perhaps for some politicians, that’s true. Syrians, though, can’t afford the luxury of contrariness. There is one very important reason to oppose any sort of concessions with Iran: Syria. Any deal that supports the regime that fuels the Assad regime’s military is simply a deal that rewards genocide, destruction, and mass displacement of innocent people,” she said.

“Today, almost half of the Syrian population has been displaced as a result of the relentless brutality of the Assad regime and the shocking violence of ISIS and Al Qaida. Eleven million people no longer live in their homes. Four million of them are refugees in neighboring countries. Over the past year, thousands of refugees have decided to risk their lives for a better future in Europe, embarking on harrowing ‘death routes’ across sea and land,” she added.

All of which can be laid at the doorstep of the Iran regime and their supporters.