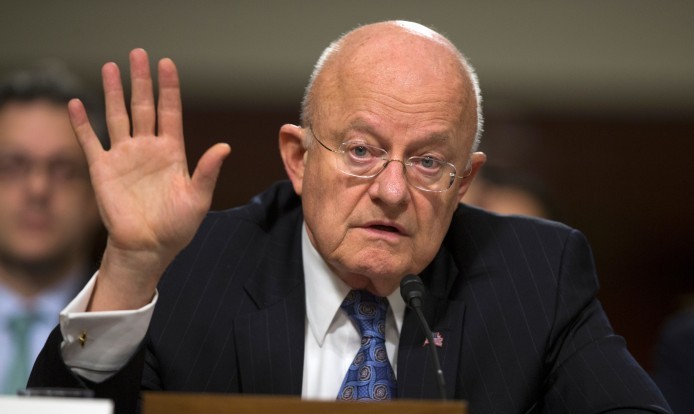 In an appearance before the Senate Armed Services Committee on Tuesday, James Clapper, director of national intelligence, gave a very somber description of what he sees as the Iranian regime’s intentions toward the U.S. now that last summer’s nuclear deal has commenced.

In particular, his statements offered little assurance the regime is acting as an honest actor with the U.S. and the other states involved in last year’s negotiations, or that the nuclear deal will stop Iran regime from obtaining a nuclear weapon.

“Iran probably views JCPOA [Iran deal] as a means to remove sanctions while preserving nuclear capabilities, as well as the option to eventually expand its nuclear infrastructure,” said Clapper.

The U.S. intelligence community has concluded that “Iran does not face any insurmountable technical barriers to producing a nuclear weapon, making Iran’s political will the central issue,” according to Clapper.

Clapper’s statements stand in stark contrast with those made by the Iran lobby led by the National Iranian American Council, which lauded the nuclear accord last summer, claiming it would not only stop all of Iran’s possible pathways to a nuclear weapon, but that “under its terms, Iran is never allowed to build a nuclear weapon.”When queried on Iran’s missile tests conducted in October and December of 2015 just months after the signing of the Iran deal, Clapper had no doubts the regime was trying to send a message.

“I think this was a deliberate message of defiance and that the Iranians are going to continue with an aggressive program to develop their missile force,” said Clapper.

The regime also continues research on its space program, which is largely considered a front for the construction of advanced ballistic missile technology.

“Iran’s progress on space launch vehicles—along with its desire to deter the United States and its allies—provides Tehran with the means and motivation to develop longer-range missiles, including ICBMs,” Clapper said.

At the same time, Iran continues to be the world’s foremost sponsor of terrorism.

The Obama administration responded to the tests with a new round of sanctions on Iran’s missile program. Regime officials said the new sanctions would not deter its ambitious missile program, and that it will instead go on the “offensive” in response.

It is in this context that the recent ramp up in testing and deployment of new ballistic missiles and nuclear warheads by North Korea is the most troubling since it has been North Korea that has provided the initial designs and materials to the Iranian regime for its nuclear and missile programs as Clapper indicated in his testimony.

He testified that North Korea has expanded its Yongbyon plant for uranium enrichment and has restarted a plutonium reactor shut down in 2007 that could produce nuclear weapons fuel “within a matter of weeks to months.” North Korea could have as many as 100 nuclear bombs less than five years from now, plus, as Clapper warned, it’s developing an ICBM missile to carry them to the U.S. homeland.

North Korea in many ways is the preview of what the Iranian regime is on track to similarly do as it has broken all of the agreements it has made, developed its weapons program under the unsuspecting eyes of international inspections and freely traded in its technology to other radical nations.

North Korea is also a reminder that hollow diplomatic promises not backed up by severe consequences leads to only more appeasement in a desperate bid to regain perceived momentum with each new violation and militant act. It’s a pattern that is already being repeated with the Iranian regime which has launched new missiles, stepped up its wars in Syria and Yemen and instituted a large-scale crackdown on human rights and political dissidents at home in advance of upcoming elections.

And even with the Iran lobby’s own, most vocal supporters being similarly tossed into Iranian prisons, the Iran lobby cannot face the awful consequences of its actions and still expresses support for the totalitarian regime in Tehran.

That link between North Korea and the Iranian regime is under scrutiny by members of Congress who have called for an investigation of the cooperation between the two regimes.

Sen. David Perdue (R-Ga.) late Monday filed an amendment to a North Korea sanctions bill that would require the administration to disclose to Congress any cooperation between the rogue Asian nation and Iran on nuclear weapon and ballistic missile development.

Congress took up the issue after North Korea said it successfully tested a hydrogen bomb last month. On Saturday, the country conducted a missile launch that it claimed was to put a satellite into space for peaceful purposes, but the U.S. and allies suspect was a long-range missile test in violation of international law.

Perdue and other members of Congress suspect that North Korea and Iran are cooperating and that the administration has been reluctant to disclose to Congress what it knows.

“It’s undeniable that Iran and North Korea have been cooperating on nuclear weapon and ballistic missile development for years now,” said Perdue, a member of the Senate Foreign Relations Committee, in a statement.

“Iranians have reportedly been present for at least three of North Korea’s nuclear tests,” he said.

Perdue’s amendment would require the administration to submit a semiannual report to Congress on North Korea’s cooperation with Iran on nuclear weapon and ballistic missile testing, development and research.

It would also require the administration to disclose to Congress the identity of individuals who have knowingly engaged in or directed material support or exchanged information between governments of Iran and North Korea for their nuclear programs.

“This amendment forces the Obama administration to disclose to Congress what it knows about this cooperation between rogue nations, instead of denying the linkages. The sooner we acknowledge this illicit cooperation, the sooner we can work to put it to a halt,” Perdue said.

The failure to rein in North Korea and the appeasement of the mullahs in Iran with a deeply flawed nuclear deal has only emboldened these regimes to aggressively move forward with their plans. We can only hope that the world will respond soon enough to halt these threats before it’s too late.