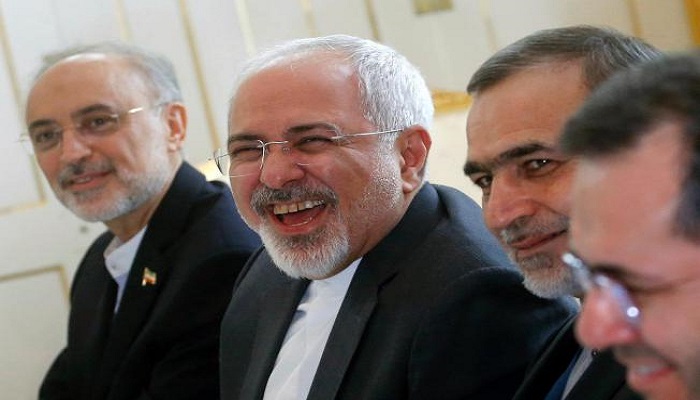 Iran Lobby Pulling Out All the Stops

The 4th of July weekend was filled with more than fireworks and celebration. It had more than BBQs and hot dog eating contests or mesmerizing Women’s World Cup finale. The holiday weekend also a blizzard of last minute lobbying by supporters of the Iran regime in a desperate attempt to push for a final key concessions including some new disturbing demands by the mullahs in Tehran.

In the vanguard were staffers from the regime’s chief lobbying group, the National Iranian American Council, which sent its representatives anywhere they could find a microphone, camera, notebook or warm body willing to listen to them.

There was no limit to what they were willing to comment about, even if it had no real tie in with ongoing nuclear negotiations or for that matter, anything of relevance to Iranian-Americans, the purported audience they were founded to help.

Reza Marashi of the NIAC spent his weekend being quoted in Voice of America about an online campaign to foster love for the Iran regime. I’m still trying to figure out just how that movement halts Iran’s funding of three proxy wars in Syria, Iraq and Yemen.

He also attempted to persuade the BBC in the Viennese hotel lobby where negotiations were taking place that talks had moved from the “expert” level and now was in the hands of “ministers.” An interesting observation since he said the exact same thing last year and in April when the interim framework agreement was announced with much fanfare and 24 hours later each side disputed what was agreed to.

But give Marashi credit for attempting wild spin control such as when he told Bloomberg News that “both sides have more maneuvering ability in their negotiating position than they are willing to let on.”

An interesting contention when regime leader Ali Khamenei laid down several red lines in the sand in the form of a detailed infographic repudiating almost everything regime negotiators had hinted at in terms of compromises.

Public lobbying for the regime’s positions wasn’t limited to the NIAC though. Long-time regime business associate Bijan Khajehpour of Atieh International has made the argument that the immediate lifting of sanctions would benefit the Iranian people with the injection of fresh capital into the economy. While everyone knows that the estimated $140 billion in frozen assets and nearly $100 billion in direct foreign investment was being eagerly awaited by the regime’s ruling mullahs who desperately need the cash to replenish coffers drained dry by three proxy wars, plunging oil prices and deep-seated corruption resulted from regime elites and their families skimming off the economy.

The most impressive linguistic gymnastics have come from Trita Parsi, the leader-for-life of the NIAC, who has given full-throated support for all of the demands laid out by Khamenei. Ironically, Parsi’s own book has been used to explain how during the Bush administration, the opportunity arose for a deal with Iran to be struck only to fail because of the “unreasonable” demands by the U.S. for regime change.

History has demonstrated though that Iran’s mullahs have never been serious about delivering a deal that undercuts their power, ability to control their neighbors, nor reduce their ongoing sectarian warfare against other religions. While Parsi contends the mullahs were perfectly willing to give up supporting terror groups like Hezbollah and cooperate with nuclear inspectors, the opposite has been the truth.

Parsi has never explained why a regime he himself has portrayed as being committed to a path of peace has instead turned into the single source of bloodshed, war, sectarian violence, terrorism and practitioner of unrivaled human rights abuses on the planet right now.

Indeed, Iran is appropriately enough the “godfather” of much of what troubles the world now. About the only thing Iran’s mullahs are not responsible for are the Greek Eurozone vote and the collapse of the Japanese women’s soccer team in the Women’s World Cup championship game.

But Parsi deserves our final attention since it has been his championing of the mullahs that has turned the once promising idea of a voice for Iranian-Americans into a propaganda megaphone for the mullahs.

In a question and answer session with Deutsche Welle, Parsi was asked if “a deal only helps Iran’s elite, the hardliners, or do you think a deal could actually help to unleash Iran’s moderate society?”

“It is the moderates in Iran who are pushing for this deal. It is the pro-democracy movement that is overwhelmingly in favor of this deal,” Parsi said.

That statement, more than any other he has made over the past few weeks, sheds the brightest light on the rank hypocrisy Parsi spouts. He attempts to convince us moderate forces are in control in Iran; the same moderate forces that:

These things and more are the proof that puts to lies what Parsi, Marashi and all other regime supporters’ contend are the true nature of the mullahs’ intentions.