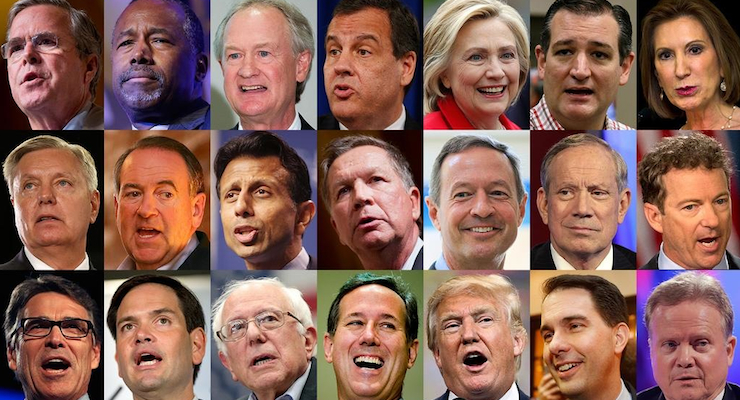 Iran Lobby Ramps Up Efforts to Influence US Presidential Campaign

The silly season is upon us and we don’t mean the College Football Playoff selection process. We mean the quadrennial presidential election season and with it, what promises to be a year filled with debates, poll results, gaffes, blizzard of television advertising and a healthy barrage of social media postings.

But the stakes for this election cycle are enormous and carry with it a sense of gravity we have not seen since during the height of the Cold War when Lyndon B. Johnson famously aired the “Daisy” ad against Barry Goldwater hinting that electing the Arizona conservative would start World War III.

Even though the ad only aired once, it has become one of the most controversial political ads ever aired used in American politics, but it did show what some political candidates are willing to entertain in terms of tackling controversial topics and issues.

Every campaign season has its own rhythms and rollercoaster swings in emotions and momentum. This season has been no different starting with a Republican field of candidates that has been dominated by two total outsiders in Donald Trump and Ben Carson, while the Democratic side was stuck in relative limbo while Vice President Joe Biden was deciding if he was in or out of the race and Hillary Clinton waded through her email controversy as Sen. Bernie Sanders rallied huge numbers of supporters.

But with the recent nuclear deal with the Iranian regime and the bloody Friday the 13th massacre in Paris, terrorism and what to do with Syria has moved front and center in the consciousness of American voters.

According to a new Reuters/lpsos poll done after the Paris attacks, showed that terrorism had moved to the front of all topics of concern to voters (20.5%), ahead of the economy (15.9%) and healthcare (8.8%) and unemployment (8.6%).

The five-day tracking showed concern over terror effectively doubled over the weekend of the Paris attacks and shows only signs of increasing as France battles additional terror cells in its suburbs while French warplanes bomb targets in Syria.

“What is almost certain is that the demands on the candidates will grow more exacting. As previous presidential campaigns jarred by outside events have demonstrated, how a candidate responds can be as important to a campaign as the event itself,” speculated Jonathan Martin in the New York Times.

What is certain has been the tepid response from the Iran lobby which has gone virtually mute and deaf over the Paris attacks. Iranian regime loyalists such as Trita Parsi and Reza Marashi of the National Iranian American Council, Jim Lobe of Lobelog, The Ploughshares Fund, just to name a few, have offered little in the way of sympathy over the victims, nor condemnation of the terrorists themselves.

If anything, their social media feeds and public statements have been largely focused on centering blame for the attacks and creation of ISIS on the doorstep of Saudi Arabia as the primary regional rival to the mullahs in Tehran.

It’s a curious stand to make since clearly sectarian violence is at the heart of most of what ails the Middle East both historically and moving forward. In fact, Iran’s all-in support for Assad in Syria help spawn ISIS in the first place as Al-Qaeda fighters pushed out of Afghanistan and Iraq by the U.S. surge flocked to Syria and splintered off to form their own groups, eventually coalescing into the ISIS we know today.

The fact that the Iranian regime has also served as a terror blueprint of sorts through its longtime sponsorship of Hezbollah in Lebanon and Shiite militias in Iraq has given ISIS a roadmap for exploiting the shock value of its attacks and dominate the news cycle; gives it the dubious honor of being a “godfather” to ISIS.

This in turn has placed a burden on the Iranian lobby to step up to the proverbial plate to try and influence the presidential elections since a new president – especially if it’s a Republican – will feel no obligation to stay the course President Obama has set with the nuclear deal with Iranian regime and the hands-off policy he has largely taken in Syria and Iraq.

To that end, NIAC Action, the official lobbying arm of NIAC, launched a petition drive directed at all presidential candidates to refrain from using rhetoric that would be deemed “hostile” at the Iranian regime.

The letter it is circulating reads in part:

“Instead, we urge you to articulate how you will seize the opportunity created by the diplomatic breakthrough with Iran to build a more peaceful future.”

To say it is a shameful misdirection of the truth would be generous, because the mullahs in Iran have been very open and specific since the nuclear agreement was secured last July in venting their vitriol about the U.S., let alone keeping up the ritual “Death to America” chants at Friday prayers.

As we move deeper into the election cycle, we can be assured of increased action by the Iran lobby as it seeks to keep a lid on American voters’ concerns over terrorism and it combats any damaging news coming out of the Middle East such as more terror attacks or the Iranian regime’s complicity in some new human rights atrocity.

But from the early signs, it seems that Republican candidates have firmly chosen to not swallow the Kool-Aid on a “moderate” Iran and the Democrats will hedge their bets and set terms for Iran that only aid in ensuring a more stable and cooperative Middle East – both goals that the mullahs are opposed to.