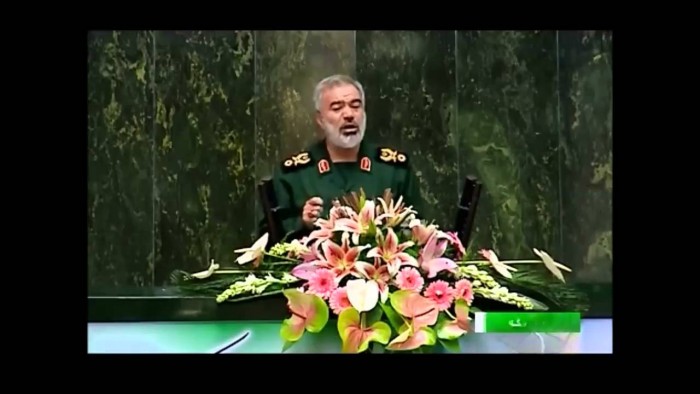 After awarding medals to Iranian navy commanders who had detained ten U.S. sailors, Sardar Fadavi, head of the regime’s Revolutionary Guards Corps Navy, addressed regime lawmakers about the incident, telling them his personnel had collected information from the sailors’ laptops and cell phones that had not yet been released, in addition to more footage. This information would be released if the United States ever sought to humiliate Iran, he said.

“If U.S. officials say they are angry with and frustrated by the footage released, they would be 100 times more embarrassed if the IRGC releases other films of the capture, the Iranian commander said,” Tasnim, the regime-owned news agency reported.

“Iran does not seek to humiliate any nation, he said, but stressed that if they want to humiliate Iran, the IRGC would publish the footage and make them even more embarrassed and humiliated,” it continued.

One could argue successfully that these are not the comments of a government interested in smoothing over differences and becoming an engaged, moderate member of the community of nations, but rather a regime that still views the world in a hostile, militant way and intent on enforcing its superiority in any manner possible.

But not everyone is buying the party line of the Iran lobby of Iran’s moderation and good intentions. The House of Representatives took up a new vote on legislation to prevent the Obama administration from lifting sanctions on Iranian entities unless it certifies they aren’t affiliated with terrorism or ballistic missile development technically already passed in the House last month, but a revote occurred on Tuesday to allow the full House to vote.

The Obama administration predictably issued a veto threat of the Iran legislation and warned it would hinder its ability to implement the nuclear accord.

“By preventing the United States from fulfilling its JCPOA commitments, H.R. 3662 could result in the collapse of a comprehensive diplomatic arrangement that peacefully and verifiably prevents Iran from acquiring a nuclear weapon,” the White House said in a Statement of Administration Policy.

Paradoxically though, the administration had previously imposed new sanctions on the regime for the test launching of illegal nuclear-capable ballistic missiles. If you confused by now, you’re not the only one.

The Senate Foreign Relations Committee also is taking fresh aim at Tehran with stepped-up sanctions to punish the regime for aggressive non-nuclear activities.

Chairman Bob Corker (R-Tenn.) and at least one other senator are crafting new measures to address everything from Iran’s recent ballistic missile tests to the country’s human rights violations to a reauthorization of the soon-expiring Iran Sanctions Act (ISA). The measures, which are likely to come up in February, will be Congress’ latest attempts to ensure President Obama punishes mullahs in Tehran for bad behavior in the wake of the now-implemented nuclear deal.

“We are looking at ways of having a much stronger pushback on the violations that took place,” Corker said of his proposed sanctions aimed at Iran’s recent ballistic missile tests.

The ballistic missile measure is part of a trio Corker is readying, along with a reauthorization of ISA — a sweeping, longstanding law to curb Iran’s nuclear and missile activities as well as its support for terrorism through sanctions on the trade, energy, defense and banking sectors. Corker is also crafting a third measure, but declined to identify its content.

Sen. Bob Menendez (D-N.J.) is also planning a package of “actions that we should be considering against Iran outside the nuclear portfolio.” Menendez has already co-authored, along with Sen. Mark Kirk (R-Ill.), legislation to extend ISA past 2016, and wants to step up sanctions against Tehran for its ballistic missile tests and human rights violations.

Their actions mark the first significant move by lawmakers against Iranian regime since the pact took effect as they seek to keep Tehran on a tight leash. It remains to be seen how the congressional pushback will be greeted by the White House.

The move by Congress are being motivated in part by the clear signals being sent by the Iranian regime in advance of parliamentary elections with the selective removal of any potential dissidents among candidates and to deliver a slate that is ideologically pure.

David Gardner, writing in the Financial Times, put it best:

“Iran’s rulers are best seen not so much as convinced theocrats but as a post-revolutionary elite of vested interests using religion as their standard. The institutions of theocracy, such as the Guardian Council or the Assembly of Experts that selects the supreme leader, guarantee their own hegemony over the republican institutions, such as the elected majlis…”

The upcoming elections then are just a formality for the ruling mullahs to legitimize their rule in their eyes and provide the illusion of democracy as they reap the financial rewards of the lifting of economic sanctions.

Ultimately the Iran lobby, led by the National Iranian American Council chooses to ignore these facts and instead continuing carrying the water for the mullahs.