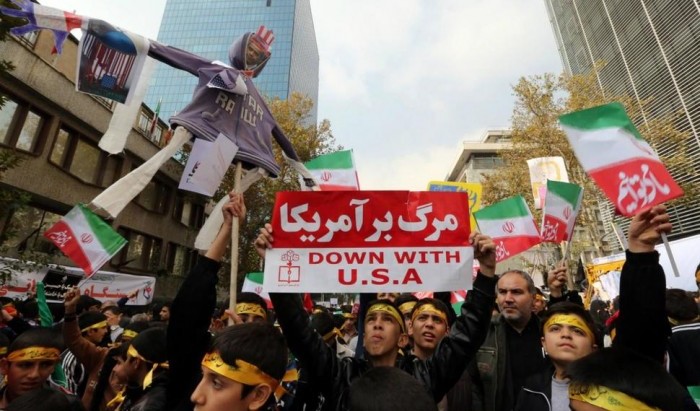 The week could not go much worse for the Iran lobby. Revelations about the outright fabrications concocted by national security staffer Ben Rhodes in pressing for passage of the Iran nuclear deal blew battleship-sized holes in the idea that the deal was a good one.

Political pressure ratcheted up quickly as Republicans denounced the alleged lying, while Democrats that supported the deal scrambled to distance themselves and urged tougher accountability of the Iranian regime.

The situation worsened as the State Department admitted to a “glitch” that erased over six minutes of video in which an answer to a question posed by Fox News reporter James Rosen as to whether or not the Obama administration had engaged in secret negotiations with the Iranian regime a full year before it said it did mysteriously disappeared only to reappear after scrutiny.

The Iran lobby has furiously tried to hold the line on the false narrative. Joseph Cirincione of the Ploughshares Fund offered an editorial in Politico that was absurd as it was desperate in trying to denounce the New York Times piece that Rhodes interview was published in.

Trita Parsi of the National Iranian American Council was left to offering weak opinions as to why most European and Asian financial institutions have halted efforts to open up transactions with the Iranian regime.

Those same institutions were scheduled to meet with Secretary of State John Kerry this week in an apparent attempt to “save” the nuclear deal by convincing banks to do business with Iran even though they are reluctant given the tangled web of Iranian human rights violations, support for the war in Syria and violations of international sanctions against developing ballistic missiles.

Financial institutions are in the business of assessing risk. They make lending decisions solely on the basis on the risk versus the reward. For many of the world’s banks, doing business with the Iranian regime is a bad bet.

Bankers doubt Kerry will be able to change their cautious approach to Iran. They fear that even if they receive assurances from the Treasury Department, U.S. prosecutors and independent regulators might adopt a different and stricter interpretation of the rules.

They add that Iran presents multiple challenges for banks other than the prospect of breaching U.S. sanctions, including the risk of inadvertently aiding money laundering, financing terrorism and financial crime in a country that almost all the economy is run by the IRGC, and has for many years been in the financial wilderness and remains “off the grid” for most compliance systems. Also

Not helping has been a near-constant stream of dubious arrests of dual citizenship nationals by the regime which has only heightened tensions and raised even more red flags about the regime and the leadership of Hassan Rouhani.

Is the Iranian regime committed to opening up to the rest of the world or is it the same regime relying on Islamic extremism and militants? The answer so far since the nuclear deal was signed seems unequivocally the latter.

The Obama administration argues that the real issues are Iran’s poor business environment and policies that undermine investor confidence — including ballistic missile tests, arms shipments to rebels in Yemen and the imprisonment of businessmen accused of espionage.

Iranian regime officials complain that the United States has warned bankers away from deals that could run afoul of U.S. sanctions that still target the country.

The United States says that those sanctions were imposed because of Iran’s continuing human rights violations and ties to terrorist groups.

And U.S. officials said Iran needs to look to its own practices. The country routinely scores low on a number of indexes ranking countries’ business climates, including those by the World Bank, the International Monetary Fund and Transparency International.

“The most pressing concern about doing business in Iran does not have to do with sanctions but with really grave and long-standing concerns about the risks of doing business there,” said Elizabeth Rosenberg, a fellow with the Center for a New American Security. “Inadequate transparency, potential money laundering and garden-variety corruption have nothing to do with nuclear proliferation.”

Adding to the ever increasing levels of tension were statements made by Revolutionary Guards commanders to sink American ships if they approached Iranian waters.

The senior naval officer making the threat referenced a “secret arsenal” of weapons Iran has developed or acquired that would be effective against American naval vessels.

Most likely the Iranian regime officials are referencing anti-ship missiles acquired from China or Russia according to the Washington Times, whose navies have long pursued a “carrier killer” missile capability to deter Western power projection capabilities.

“We have informed Americans that their presence in the Persian Gulf is an absolute evil,” Rear Admiral Ali Fadavi stated to state media. “Americans are aware that Iran would destroy their warships if they take a wrong measure in the region.”

His statements follow an incident in which Iranian forces captured and detained 10 U.S. sailors before parading them for propaganda purposes on state-run media.

Obviously none of this reassures anxious bankers who prize stability more than anything else. The mullahs in Tehran have demonstrated they are far from being stable.