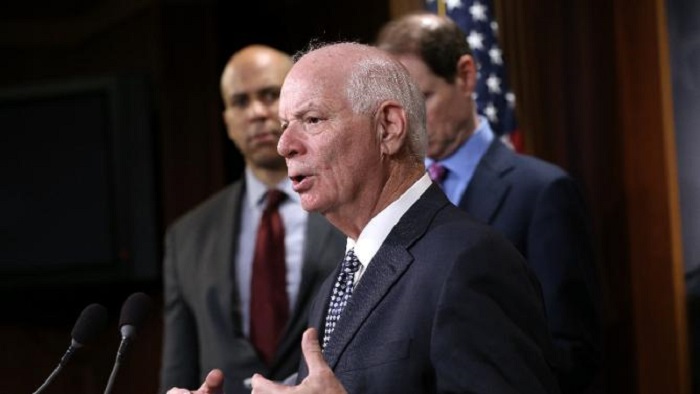 Passage of the nuclear agreement between the Iran regime and the P5+1 group of nations was aided by a coalition of liberal Zionist groups, progressive organizations and the regime lobbying network, but in the aftermath the fault lines have cracked that coalition and broken it apart as the world struggles with the still unanswered fundamental problem with the Iran regime: How do you restrain its support for terror, proxy wars and sectarian conflict?

Philip Weiss, writing in Mondoweiss, takes note of efforts by Senate Democrats, most of whom supported the nuclear deal, to offer up legislation that the regime lobby has said contains potential “poison pills” liable to derail the agreement.

It’s understandable as many voters are appalled at the downward spiral of events in the Middle East, especially Iran’s newly formed alliance with Syria, Iraq and Russia.

Republicans have pounced on recently announced deals by the Iran regime to acquire $20 billion in new jet aircraft and satellite technology from the Russians as evidence the mullahs are more interested in upgrading their aerospace and defense capabilities than in jump starting a moribund economy driven to near bankruptcy by a corrupt government and siphoning of billions to fund three proxy wars.

This new “Axis of Terror” has greatly unsettled a world that naïvely thought the nuclear deal would usher in a period of greater stability and moderation. Instead, the world has seen Russia – almost overnight – launch an air campaign in Syria, coupled with a large build-up of Iranian and Hezbollah forces along the Syrian border, bolstered by a fresh influx of Afghan mercenaries paid for by the Iran regime’s Quds Force.

The list of acts by the Iran regime according to the Wall Street Journal since the nuclear deal was approved has forced the Iran lobby to work overtime to cover for it:

In a sign of how bad things have gotten for the region, “dozens of conservative Saudi Arabian clerics have called for Arab and Muslim countries to ‘give all moral, material, political and military’ support to what they term a jihad, or holy war, against Syria’s government and its Iranian and Russian backers,” according to Vice.com

But in spite of the sharp escalation in tensions with the Iran regime, the mullahs still seem intent on keeping their economy on a war footing. Agence France-Press disclosed warnings from Iran regime ministers overseeing the economy, industry, labor and defense who warned of an economic collapse.

Mohammad Gholi Yousefi, an economics professor at Allameh Tabatabai University in Tehran, said the letter had exposed tensions over the allocation of cash from Iran’s own banks.

“Almost half the banks’ resources is practically blocked by the government, special customers and banks themselves,” he told AFP, meaning it is not reaching businesses crucial to the economy and that much of the regime’s anticipated cash hoard is not accessible by middle class and poor Iranians who have seen their purchasing power plummet since 2012 and the local rial currency losing two-thirds of its value.

The recent aggressive moves by the Iran regime to acquire new military hardware and boost military forces involved in Syria has been fueled in part by the softening of sanctions even during nuclear talks as claimed by many critics of the nuclear deal.

According to  Reuters, “the U.S. government has pursued far fewer violations of a long-standing arms embargo against Iran in the past year compared to recent years, according to a review of court records and interviews with two senior officials involved in sanctions enforcement.”

“The sharp fall in new prosecutions did not reflect fewer attempts by Iran to break the embargo, the officials said. Rather, uncertainty among prosecutors and agents on how the terms of the deal would affect cases made them reluctant to commit already scarce resources with the same vigor as in previous years, the officials said.”

All of these accommodations and acts of appeasing the mullahs in Tehran in the hopes of creating a more moderate Iran regime have come home to roost and borne no fruit other than more war and chaos.