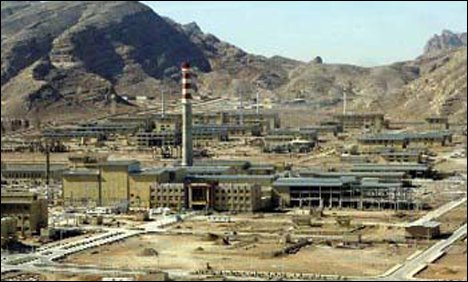 A funny thing happened this weekend. The Associated Press reported last week the contents of a secret side deal between the Iran regime and the International Atomic Energy Agency over the issue of Iran finally allowing inspection of its Parchin military facility, long suspected of being used in research in its nuclear weapons program.

That story and side agreement set off a social media firestorm as regime supporters such as the National Iranian American Council, Ploughshares Fund and J-Street went all-in denouncing not only the story, but the very existence of the purported side deal agreement.

Tom Nichols wrote in the Daily Beast a compelling blow-by-blow review of what the mudslinging that went on as supporters of the mullahs in Tehran pulled out every tactic they could think of to contain the damage wrought by the AP story in which Iran was seemingly granted significant concessions in self-inspecting and reporting soil samples from the Parchin site without international oversight.

Nichols compared the attacks and arguments of the Parchin truthers to the much-mocked 9-11 truthers who spun up elaborate fantasy theories about the 9-11 attacks being organized by the U.S. government and Israel. Nichols wrote:

The Huffington Post made the strongest play by noting that former IAEA official Tariq Rauf said that in his view it was “not an authentic document” and represented an attempt to “hinder” the Iran Deal. Because the AP’s draft referred to Iran as the “Islamic State of Iran” – its official name is the Islamic Republic of Iran, which also appears in the draft – some seized on this as evidence of involvement of…well, You Know Who: “The only one who refers to Iran,” Trita Parsi of the National Iranian American Council tweeted, “as ‘Islamic State of Iran’ is [Israeli Prime Minister] Netanyahu. And strangely, AP’s dubious ‘draft’ of the IAEA-Iran agreement…”

AP writer Matt Lee upbraided Parsi, saying: “You know better than this.” Parsi, in classic truther fashion, replied: “I am pointing out the language similarity and calling it strange. That’s it.” Max Fisher of Vox, for his part, called the AP story “troubling” and backed off when Lee also directly challenged him to take a position on the forgery charge. Lewis eventually said he thought “Islamic State” was transcription error, but he spent the rest of the day in a snarky pissing match with Lee and the AP on Twitter.

Nichols also noted how all of the charges about the forged IAEA side agreement hit Internet and social media all at the same time on Friday morning, calling the timing more than coincidental. Most interestingly though was the fact Nichols noted the new tactical change in the Iran lobby’s attacks, especially on journalists who published an unfavorable piece on the Iran regime or deal.

“The Iran Deal supporters knew there was no point in trying to rebut the substance of the claim: the story was out, people had already read it, and politicians had already reacted. A careful analysis of whether the document said what the AP headline said it did would take too long, and most people wouldn’t bother with it,” Nichols said. “Instead, the story had to be discredited and flushed, as soon as possible. There wasn’t time to explain that ‘monitor’ might mean different things to a lay reader and to an expert. Better simply to throw an array of charges at the Associated Press and its reporters and see what sticks.”

“The warning shot to other journalists is clear, however. Reporters with one of the most reputable news organizations in the world had to fight off odious charges for doing their job. This is apparently the price to be paid for reporting anything that challenges support for a deal that has reached, among its adherents, the status of a dogma that tolerates no heresy,” he added.

But these attacks by the Iran lobby point out the most significant issue surrounding these secret side deals; the fact that they are still secret.

William Tobey and Judith Miller writing in Real Clear Politics took the Obama administration to task in keeping these deals secret and outlined three compelling reasons why they should be made public:

“Second, while such side deals are normally secret, the Iran agreement is far from a normal case. Both the IAEA Board of Governors and the United Nations Security Council concluded that Tehran violated its earlier Safeguards obligations on numerous occasions over an extended period of time. Moreover, Iran, under its earlier commitments, was supposed to let the IAEA visit Parchin with 24 hours’ notice. Yet the agency has been waiting years for access, while Iran has conducted a massive cleanup at the location.

“Third, the overarching deal removing sanctions on Iran was struck by seven nations and the European Union—not just by Iran and the IAEA.”

State Department spokesman John Kirby, in his regular press briefing on Monday, did not build confidence either when he said the government believes the IAEA will give it all the “access and information” it needs in regards to inspections at Parchin.

Pete Kasperowicz of the Washington Examiner explained how Kirby’s subtle addition of the phrase “access and information” reinforced the perception that the IAEA side deals surrendered control of the testing and inspection process to the Iran regime.

New York Times correspondents David R. Sanger and Michael R. Gordon took a deeper dive in the future risks posed by the Iran deal and concluded “that after 15 years, Iran would be allowed to produce reactor-grade fuel on an industrial scale using far more advanced centrifuges. That may mean that the warning time if Iran decided to race for a bomb would shrink to weeks, according to a recent Brookings Institution analysis by Robert J. Einhorn, a former member of the American negotiating team.”

“Critics say that by that time, Iran’s economy would be stronger, as would its ability to withstand economic sanctions, and its nuclear installations probably would be better protected by air defense systems, which Iran is expected to buy from Russia,” they added.

All of which points out that the real truth behind the Iran lobby’s arguments is that the mullahs in Tehran cannot be trusted.