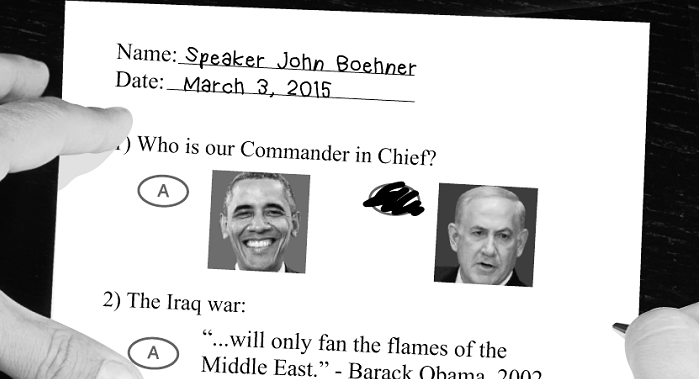 Yesterday one of the Iranian regime’s most loyal lobbying groups, the National Iranian American Council, took out a full page ad in the New York Times. In it, the NIAC decrying House Speaker John Boehner’s invitation for Israeli Prime Minister Benjamin Netanyahu to address a joint session of Congress on Iran’s nuclear program.

There is no argument that the Israeli leader’s presence is a controversial and divisive one, but the real issue at hand here is not his remarks, but the omnipresent effort by NIAC and other Iran sympathizers to do virtually anything to change the channel away from the key issues surrounding the Iranian regime’s conduct and instead shine the spotlight on other perceived villains.

If Trita Parsi of the NIAC thought it would work, he would probably also take out full page ads in American newspapers blaming global warming, high cholesterol and the upcoming fifth season of Game of Thrones for derailing nuclear talks between Iran’s mullahs and the P5+1 group of nations.

But the advertisement is instructive on several levels.

One, it shows just how desperate Iran’s mullahs have become. At a time when ISIS and other terror groups pledging loyalty to them are busy beheading and burning Christians, Jordanians, Iraqis, Japanese, Britons, Egyptians and Americans on television around the clock, the American people’s concern over foreign affairs and fanatic Islam has now shot through the roof.

A new poll conducted and released by CBS News showed a whopping 65 percent of Americans view ISIS as a major threat, up from 58 percent in October, with a majority of Republicans, Democrats and independent viewing ISIS as their top concern above jobs and the economy.

The poll further showed a growing groundswell of support among Americans for the use of American ground troops to stop ISIS with 57 percent now favoring sending combat troops into Syria and Iraq. What bodes ill for Iranian regime sympathizers is the sharp rise among Democrats for action with a majority now supporting combat action.

Which leads us to the second issue Iran’s mullahs are terrified about which is the U.S., pushed by concern over ISIS and continued failures at the bargaining table to win nuclear concessions from them, will finally throw its hands in the air and take matter into its own hands and force both issues.

Iran’s religious cadres have worked tirelessly to gain control over Iraq’s political and military leadership. It has used the growth of ISIS as an excuse to move its Quds Force and the Revolutionary Guard Corps into Iraq and take over control of Shiite militias, as well as gain understanding of American combat tactics from Iraqi units trained by departing American forces.

Without making any concessions in nuclear talks, Iran’s mullahs have managed to solidify their grip on Iraq and Syria and make deep in roads with Islamic extremist movements making gains in Yemen, Nigeria, Libya, Chad and Sudan.

Iran’s mullahs have also managed to quash any dissent at home and have felt comfortable enough to arrest and imprison American journalists and missionaries without charge or trial and without fear of any retribution.

Lastly, NIAC’s ad also reveals the almost pathological effort to find any villain it can blame for another failure in nuclear talks, especially when Mullah’s Supreme Leader, Ali Khamenei once again went on another public rant this week denouncing the U.S. and West, threatening economic repercussions on Europe and recommitting to a nuclear future.

The timing of the ad in light of Khamenei’s venting is auspicious and a clear sign NIAC is hard at work covering for the Iranian regime.

Parsi’s latest tactic only reveals the ever-growing weakness in the Iranian regime’s position as the March 24th deadline fast approaches.