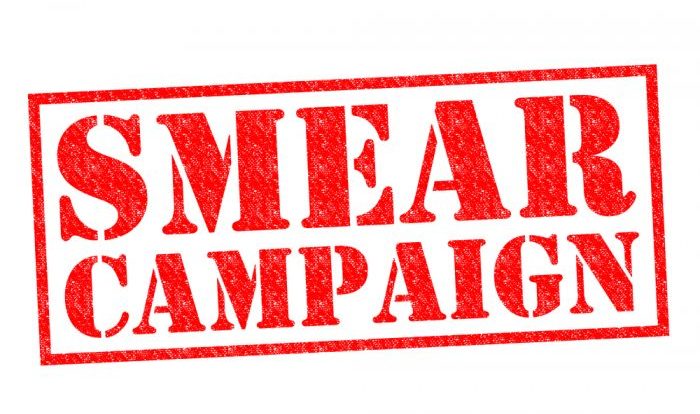 The mullahs in Tehran are probably wondering how things went so bad, so fast for them as the Trump administration followed up it’s tough talk of putting the Iranian regime “on notice” with new sanctions aimed at its ballistic missile program.

The difference from the accommodating Obama administration to the Trump approach to Iran has been night and day and one that must be causing consternation in Tehran. It has also spurred the Iran lobby into action to try and defuse the rising tide of momentum against the Iranian regime.

For the Iran lobby, it is taking a page out of their old playbook to attack and smear anyone even remotely associated with the Iranian resistance movement. The latest example has been the effort to try and smear one of President Trump’s cabinet secretaries and his circle of advisories. In this case, Elaine Chao, confirmed last week as transportation secretary, and former New York mayor Rudy Giuliani.

The Associated Press’ Jon Gambrell ran a story saying that Chao, while as a private citizen, was paid a speaking fee from a human rights group associated with an Iranian dissident group that had at one time been placed on the U.S. State Department’s terrorism watch list only to be removed after the facts in question were proven untrue.

Chao herself confirmed she received $50,000 in 2015 for delivering a speech to a rally held in support of human rights in Iran sponsored by a coalition of human rights and dissident groups under the umbrella of the National Council of Resistance of Iran.

One of the groups belonging to the coalition is the Mujahedeen-e-Khalq (MEK), otherwise known as the People’s Mujahedin Organization of Iran. Giuliani was also a featured speaker and paid an honorarium.

The list of supporters of the Iranian dissident movement though is much broader and bipartisan than the AP intimates, including prominent Republicans such as former speaker of the House Newt Gingrich and Democrats such as former Sen. Robert Torricelli.

From these loose “facts” the Iran lobby has consistently attempted to peddle a “guilt-by-association” theory, which might work if there was anything to be guilty about. The true facts are that former secretary of state Hillary Clinton’s own State Department made the decision to remove these Iranian dissident groups from any watch or terror lists and since then, these groups have worked tirelessly on behalf of the Iranian people.

Moreover, these Iranian dissident groups have proven instrumental in revelations about the Iranian regime’s secret practices, including the first leaks made to the public about Iran’s secret nuclear weapons program and its horrific human rights abuses.

All of which makes Gambrell’s story even more ludicrous since he writes himself that the “nothing was prohibited” about the paid speeches both Chao and Giuliani made. He also neglects to make any comparisons on the other side.

For example, even though the Iranian regime and its functionaries such as the Revolutionary Guard Corps and its Quds Force remain on the U.S. list of designated sponsors of terrorism and that these groups supplied the IEDs to Shiite militias in Iraq that killed and wounded thousands of U.S. men and women service personnel, the Obama administration felt it okay to engage in active diplomacy and agree to a nuclear deal.

The difference is appalling.

What is even more curious about Gambrell’s article is how he takes the Iranian dissident groups to task for cheerleading against the Iranian regime and recruiting American political leaders to the cause.

Last time we checked, we didn’t see any problems in opposing the public execution of women and children in Iran or the arrest and imprisonment of dual national citizens, including Americans or the use of terrorist proxies such as Hezbollah to eradicate entire Syrian villages of men, women and children.

Gambrell even goes to the deepest, darkest well of lies promoted by the Iran lobby in trying to link these dissident groups to attacks on Americans in 1975 (which he admits, has been rejected by the organization, as all its leaders were in Shah’s SAVAK prisons), but fails to mention the Americans killed by Iranian agents in Lebanon, Syria, Saudi Arabia, Afghanistan and Iraq. At some point, any reasonable journalist would ask the question why is it okay to excuse Iranian regime-sponsored killing of Americans, yet try to appease and accommodate that same regime.

Gambrell’s biggest complaint about the Iranian dissident movement seems to be its effectiveness in fundraising and communicating its message to global media. In that regard, these groups are no different than environmental activists or free trade protestors.

To say these claims have been discredited over and over again would be redundant and eventually pointless since Chao, as transportation secretary, has no influence over foreign policy, unless the U.S. plans on building a new subway in Tehran, but it seems this is the best the Iran lobby can come up with these days as it sees the Trump administration take its first firm steps in finally holding Iran accountable once again.

While the initial sanctions announced by the Trump administration seem relatively minor in scope and effect by targeting Iranian officers and executives tied to the IRGC, it also included related Chinese, Emirati and Iranian business executives for their role as well.

The expansion is important since it broadens the scope of what the U.S. is looking for in terms of suppliers to the regime, but it also signals that the administration is open to widening the net in the future.

U.S. lawmakers are drafting legislation that would require the White House to designate Iran’s elite military unit, the Revolutionary Guard Corps, as a terrorist organization. Companies owned by the IRGC control large sectors of the Iranian economy, according to the Wall Street Journal.

This is a significant step since a broad terror designation for the IRGC, linked to its web of companies in support of an illicit ballistic missile program could make wide sectors of the Iranian regime’s economy open to new sanctions separate and apart from the nuclear deal.

Hence it would be able to sanction Iran’s most corrupt organizations without having to scrap the nuclear deal as the Iran lobby has warned the new U.S. administration would.

All of which is sure to worry the Iran lobby even more and spur even more scandalous lies and falsehoods.