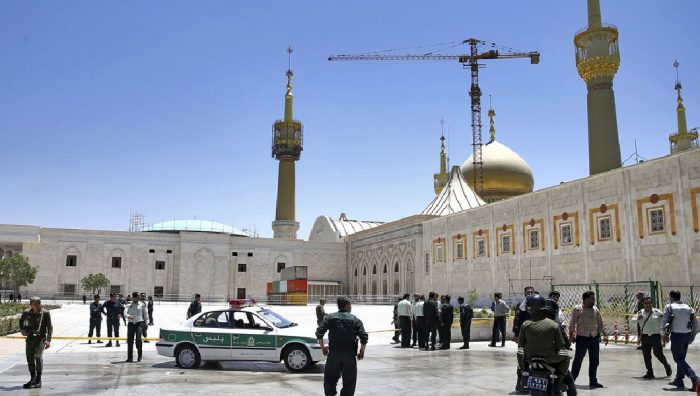 The attack claimed by ISIS on Iranian targets the other day, including the Parliament building that killed 17 people, would normally be cause for universal condemnation and sympathy for the dead and wounded, but only the Iran lobby can find a way to use tragedy for its own purposes as various groups stepped up the rhetorical assaults against Saudi Arabia and the U.S.

Most notable was the National Iranian American Council which issued a full broadside of press statements, tweets, editorials and media interviews all focused on blaming Saudi Arabia, the U.S. and Iranian dissident groups for the attack.

“ISIS has had very little success striking inside Iran. Main reason is they can’t recruit Iranians easily, so no local knowledge,” said Trita Parsi, president of the NIAC. “Only group with local knowledge that can slip into Iran easily is the Iranian terror group the MEK.”

It is interesting Parsi uses the same language as the Iranian regime in depicting Iranian dissident groups as “terror groups” knowing full well these groups are largely engaged in humanitarian efforts, information and news gathering and exposing the corrupt practices the regime government.

But more interesting is how attempting to reset the debate away from the recent history of Iran’s involvement in the bloody civil war that helped spawn ISIS in the first place, but instead pivot to accusations against Saudi Arabia and foreshadowing military action against the kingdom from Iran.

“Iranians believe there has been a lot of provocation, but they’ve been very restrained so far vis-a-vis Saudi Arabia,” Parsi said to the Washington Times. “Now the nation’s leaders are going to be under a lot of pressure from the Iranian public to respond in some way.”

Parsi said aggressive statements by Saudi leaders have “created a context in which the IRGC can convince the Iranian public not only that the Saudis were connected to Wednesday’s attack, but that the U.S. is also connected,” even if there may not be any evidence for such.

According to Vice News, hours before Wednesday’s attacks, Saudi Foreign Minister Adel al-Jubeir characterized Iran as the leading sponsor of terrorism and called for action to be taken against it over its destabilizing actions in the region, where it is involved in Lebanon and Yemen, as well as Syria and Iraq. In turn, Iran blamed Saudi Arabia for supporting the rise of Sunni extremist groups in the region.

Parsi has laid out the argument justifying military action against Saudi Arabia now that the mullahs in Tehran feel they have justification now to engage in even more provocative action. Whereas supplying the Houthis in Yemen to threaten Saudi Arabia’s border was seen as the extent of Iranian actions, Parsi is now laying the intellectual foundation for an ever-widening war.

A curious position for the NIAC to take since its stated purpose is to help resolve differences among Iranian-Americans.

But there is a broader agenda at play here since legislation is moving through the U.S. Senate now to impose new sanctions on Iran for violations of ballistic missile testing. Parsi and his cohorts in the Iran lobby see new sanctions as an existential threat to the Iranian regime and doing all they can to reset the debate away from Iran and even cull some sympathy from the attacks.

The NIAC is now vigorously attacking the sanctions bill and attempting to leverage the ISIS attack into an argument that passing the legislation would even hamper the fight against ISIS.

A corollary to that argument is the opposition by the NIAC to the designation of the Iranian Revolutionary Guard Corps as a Foreign Terrorist Organization (FTO) by the Trump administration.

The NIAC’s Adam Weinstein authored an opinion piece in Defense One arguing that the IRGC was a key element in the fight to oust ISIS from Mosul, Iraq.

“The success of this offensive is in large part due to the ability of the Iraqi army to act as an intermediary between Iran-backed militias and U.S. troops. However, a Senate bill, the Countering Iran’s Destabilizing Activities Act of 2017, will likely lead the Trump administration to label the IRGC as a terrorist group. Combined with the administration’s increased alignment with Saudi Arabia against Iran, this step threatens to fracture this de facto coalition in Mosul, detract from the fight against ISIS, and recklessly endanger the lives of U.S. forces,” he writes.

It’s a stretch of an argument since IRGC troops are now in the forefront in Syria engaging with U.S.-led forces, even to the point where the U.S. warplanes attacked an Iranian-backed convoy of Shiite militias as it approached U.S. bases.

That hardly sounds like the actions of a U.S. ally determined to fight ISIS.

In fact, the truth is Iran’s play in Syria has always been to target anti-Syrian regime forces and largely leave ISIS forces unscathed. Even after persuading Russia to enter the fray, Iranian officers providing targeting data to Russian warplanes not of ISIS positions, but often anti-regime forces and civilian targets in areas controlled by rebels.

What Weinstein, Parsi and their colleagues fail to recognize is that Iran’s own actions are the determining factor in how the U.S. is going to shape its foreign policy. So long as Iran continues the slaughter in Syria, pushes Saudi Arabia with the Houthi rebellion in Yemen, and broadens tensions with its support for Qatar, as well as increasing turmoil in Bahrain, then the regime is going to reap what it has sown.