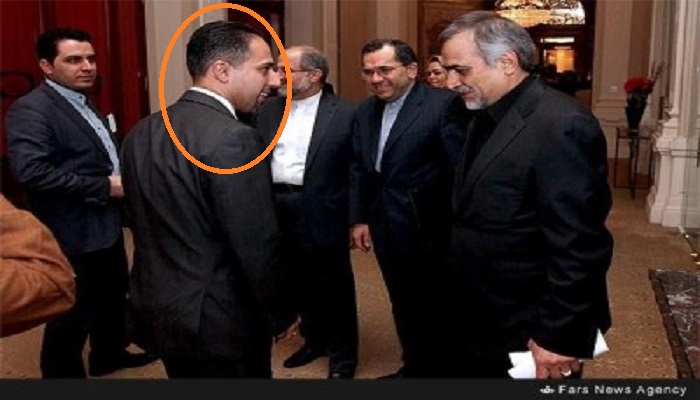 In Las Vegas over the weekend, the “Fight of the Century” took place with Floyd Mayweather winning the welterweight championship over Manny Pacquiao with a display of his textbook defensive boxing skills that kept his aggressive opponent at bay, earning him the unified title.

While, Mayweather raked in a reported $200 million for a night’s work, Trita Parsi, the head of the National Iranian American Council, has been busy earning his money on behalf of the Iranian regime trying to plug more holes in the regime’s façade of “moderation” than the Little Dutch Boy had fingers in the dike.

In Politico, Parsi was deflecting questions over insane comments being made by Iran regime officials, including some whoppers that Sen. John McCain (R-AZ) was caught meeting with the founder of ISIS, Abu Bakr al-Baghdadi, the Sunni militant group’s self-declared caliph. The photo used by the regime broadcast doctored images that even a high school student using Photoshop could have done a better job creating.

The litany of imagined and conjured offenses by the U.S. against the mullahs span the spectrum of silly to crazy, but they all point to a recurring pattern of propaganda efforts by the regime in Tehran to portray mullah’s Iran as the offended nation, thereby justifying all of its actions in the name of defending the Islamic nation from its enemies, real or imagined.

In an even more bizarre twist, the Iran regime finally accused imprisoned Washington Post reporter Jason Rezaian of espionage, but oddly charged him with working with the NIAC as proof of his spying against the regime, claiming conversations he had with Parsi through Twitter was proof enough.

Parsi was left in the uncomfortable situation of having to denounce Rezaian was working with the NIAC, but at the same time correct the New York Times characterization of the NIAC as being “supportive of Iran” on all issues. It must be a trying task for Parsi to keep straight all of the disingenuous things he says to various news media.

Parsi, in another interview with the Loyola Marymount University’s Asia Pacific Media Center, claimed the charges against Rezaian were all part of a plot to undermine nuclear negotiations with Iran and the P5+1, which is an odd statement to make. One would think Iran’s provocative attempt to ship arms to Houthi rebels via armed convoy was enough to undermine talks, or Iran’s seizure of an unarmed cargo vessel might be enough to trouble negotiators, both acts that Parsi failed to criticize.

But Parsi also found himself back in the spotlight with disclosures by the Washington Free Beacon that he had met with the White House several times between 2013 and 2014 according to visitor logs to pressure for a deal with the regime.

Interestingly, The Free Beacon also reported links between meetings at the White House with Joseph Cirincione, president of the Ploughshares Fund, a group trying to sell a nuclear deal which has also provided generous funding to NIAC, meeting at the White House as well to help sell the regime’s deal.

According to the Wall Street Journal, Ploughshares has spent more than $7 million funding groups such as NIAC and experts like Parsi who have publicly defended making concessions to Iran’s mullahs as part of a nuclear deal with Iran.

All of that money has certainly helped enrich regime allies such as Parsi. In fact, we should probably congratulate him on the successful sale of his home for $705,000.

It’s good to know business with the mullahs can be lucrative.