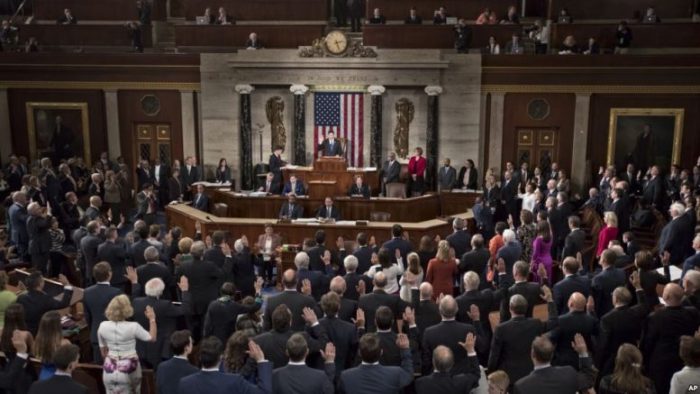 A new Republican-controlled Congress took office on Tuesday and with it comes the promise of sweeping changes in American foreign policy versus the last eight years. Most notable will be an almost certain end to the policy of appeasing the Iranian regime followed by the Obama administration in the hopes of moderating Iran’s behavior.

What is also sure to happen as well is a greatly diminished role for the Iran lobby in this new administration, especially for supporters such as the National Iranian American Council. Evidence of that reduced stature and influence has come in the downward spiral in media opportunities members of the NIAC are receiving.

Trita Parsi for example has been relegated to providing analysis on Russia Today segments and the self-blogging forum TopTopic has become the go-to publisher of NIAC commentary. Gone are the heady days of placements in the New York Times and CBS News and now they face the uncomfortable truth that they are in danger of becoming irrelevant.

One of those TopTopic pieces was written by Ryan Costello from NIAC in which he lamented the tidal wave of bills being introduced aimed at punishing various aspects of the Iranian regime such as a bill by Rep. Alcee Hastings (D-FL) authorizing the Trump administration to use military force against Iran should it be necessary.

Costello characterizes Hasting’s move as representative of a “small minority” of Democrats opposed to the nuclear deal with Iran, but what he fails to acknowledge is the fact that there is actually a growing nucleus of Democrats that the American people want to stop giving Iran endless concessions.

Costello goes on to mention additional bills being offered up including one proposal by Sen. Dean Heller (R-NV) that would impose sanctions on Iran for its ballistic missile program. While Costello laments the flood of bills coming to the fore with the change in Congress, he—and the rest of the Iran lobby—ignore the reasons why these bills are being offered up now.

The mood in America and frankly through most of Europe has swung dramatically since the nuclear agreement was reached with Iran from one of hopeful optimism to uncertainty and fear. The rise of Islamic extremism rippling across the globe, striking in cities such as Boston, San Bernardino, Orlando, Paris, Brussels, Nice and Berlin, have all been harsh reminders to elected officials that wishing for moderation does not yield moderation from extremist groups and hostile nations such as Iran.

The question of how to confront Iranian extremism has never been answered by the Iran lobby other than to repeatedly call for more accommodation and more restraint. That position has now lost its status and consigned to the political junk heap of obscure blogs and media controlled by Iran and its few allies.

Now the major media have turned their attention to the specific pathways open to Trump to restrain the Iranian regime and that is a fundamentally different approach from what the Iran lobby has tried to champion over the past five years.

The Wall Street Journal looked at the possibility of re-imposing economic sanctions, which may be opposed by European allies, is certainly available to Trump as a leverage tool at the very least.

President Trump could, among other things, re-impose the “secondary” sanctions that bar foreign companies from doing business with those individuals or entities on sanctions lists, the Journal said.

“The Iran sanctions program will be the one with the quickest attempt by the administration to put their mark on,” said Adam Smith, an attorney at Gibson Dunn & Crutcher LLP who previously served as a senior adviser at the U.S. Treasury Department’s Office of Foreign Assets Control, the main enforcement body for sanctions.

Heshmat Alavi, a political and rights activist, authored a piece in The Hill tackling this notion of Iranian “moderation” and declaring it a myth solely designed to gain Western support for a deal that would allow the mullahs access to billions of dollars in desperately needed cash.

“If Tehran truly bore the intent to not only embrace the nuclear agreement but the spirit of the accord with the West, they would not have test-fired missiles in March or October of this year,” he said.

“If the mullahs are actually sensitive about the human rights of ordinary Iranian citizens, then this regime would not have executed over 3,000 people in the past four years alone and nearly 1,000 in 2015.

“This regime, if actually sensitive about its ‘moderate’ image, would not be executing women and minors, and would not be sending opposition supporters to the gallows. This certainly doesn’t sound anything similar to ‘moderate’ behavior, at least not in the democratic world,” Alavi added.

Alavi calls for greater outreach by the Trump administration to avowed opposition and dissident groups such as the National Council of Resistance of Iran, a broad coalition of Iranian dissident and human rights groups opposed to the mullahs rule.

By switching from listening to the propaganda of the Iran lobby to the sound policy recommendations of the Iranian opposition, Trump can advance the cause of peace and democracy in the Middle East faster than anyone could imagine.