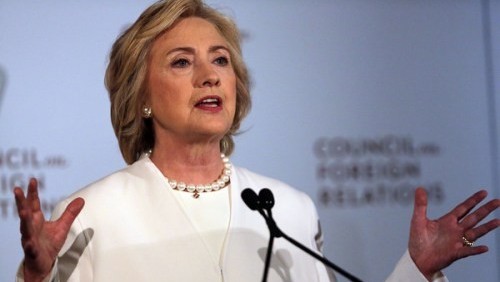 If there is any silver lining in the wave of terrorist attacks, sectarian wars being waged and ominous threats and provocative actions coming out of the Iranian regime, it is that virtually all of the candidates running for president in 2016 are united in their collective wariness of the mullahs in Tehran.

That lack of desire among the presidential candidates ranges from outright hostility to the regime to a recognition that the mullahs are committed to an agenda that does not support moderation or regional peace hopes, but that certainly has not stopped the Iran lobby from attempting to influence those campaigns or the American voting public.

The lobby’s chief advocate has long been the National Iranian American Council and its newly created lobbying arm, NIAC Action, which has been urging its supporters to sign and send in petitions and letters to the various campaigns urging them to support the nuclear deal and a broadened dialogue with the regime should they win the White House.

Judging by the lack of enthusiasm from the various campaigns, we can assume that the petition drive by NIAC is being received with less than stellar applause, which might explain by Reza Marashi of NIAC took to Huffington Post with an editorial criticizing Hillary Clinton for taking a harder line against the Iran regime and Islamic extremism in some of her stump speeches.

Marashi took exception to a speech Clinton delivered the Council of Foreign Relations where she said:

“We cannot view Iran and ISIS as separate challenges. Regional politics are too interwoven,” she said. “Raising the confidence of our Arab partners and raising the cost to Iran for bad behavior will contribute more effectively to the fight against ISIS.”

Her views that Iran’s Arab neighbors could become more effective partners in the fight against rising Islamic extremism only if the Iranian regime was held accountable for its actions, such as the recent attempt to overthrow the government in Yemen and the effort to take over the Iraqi government, is both a prudent and smart foreign policy declaration for someone who could very well be sitting in the Oval Office in 2017.

The fact that Marashi takes the well-worn Iranian regime talking point blaming its Arab neighbors for the supporting these terror groups is evidence of how paltry and bereft of substance the arguments are from the Iran lobby. The NIAC and other regime supporters have opted to try and shift blame for the rise in terror, including the bloody attacks in Paris on anyone else but the Iranian regime.

But Secretary Clinton recognizes a key point that Marashi and his ilk are desperate to cover up, which is Iran, as a theocratic state, uses its status as a country to support and prop up many terror groups around the world and engage actively in proxy wars that have threaten to draw the rest of the world into bloody conflict. While the flow of funds to some terror groups may be traced back to donations from individual donors, Iranian regime is the only nation-state that has devoted its treasury, military, economy and political influence in supporting groups such as Hezbollah and the Houthis, as well as provided safe harbor and shelter for members of Al-Qaeda and ISIS in the past.

The one true statement Marashi makes is when he says “the more options America has, the greater its leverage becomes.”

In this he is correct, but not in the way he intended because in agreeing to the nuclear deal with Iranian mullahs, the U.S. has unwittingly hampered itself by taking a whole host of tools off the table ranging from continued sanctions to restrictions on the flow of cash coming from the Iranian regime and into the coffers of various terror groups.

But what is even more surprising are the revelations in a recent National Review story that pointed out that the nuclear agreement had not even been signed by the regime and in effect has no legal standing.

“The Joint Comprehensive Plan of Action (JCPOA) is not a treaty or an executive agreement, and is not a signed document,” wrote Julia Frifield, the State Department assistant secretary for legislative affairs, in a November 19 letter written in response to an inquiry sent to Secretary of State John Kerry by Rep. Mike Pompeo (R-Kan.).

Regime leader Hassan Rouhani discouraged his nation’s parliament from voting on the nuclear deal in order to avoid placing legal burdens on the regime, saying “If the Joint Comprehensive Plan of Action is sent to [and passed by] parliament, it will create an obligation for the government. It will mean the president, who has not signed it so far, will have to sign it,” Rouhani said in August. “Why should we place an unnecessary legal restriction on the Iranian people?”

That statement has led to rampant speculation on Capitol Hill that the nuclear deal is already null and void, which explains why most of the presidential candidates have already staked out policy positions visibly diverging from what the Obama administration negotiated with regime.

As more journalists point out this inconvenient truth, such as Michael Ledeen writing of the lack of any signatures in Forbes, we can expect an even more desperate attempt by the Iran lobby and Marashi to try and shift more attention away and onto another false canard. Maybe they can blame El Nino on too much methane coming from cows next.