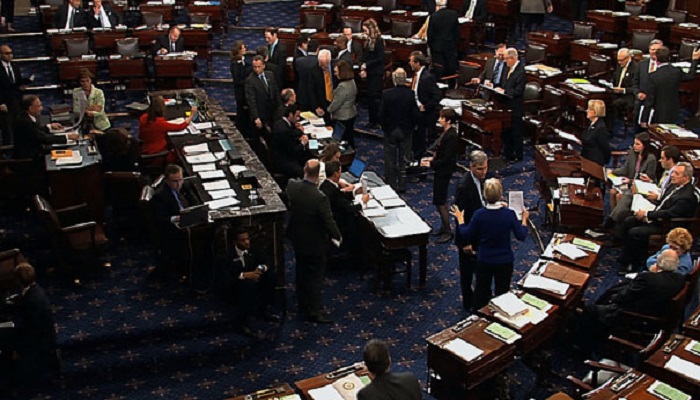 It is a curious thing. The National Iranian American Council (NIAC) claims to advocate on behalf of the Iranian American interests, but virtually all of its public and media outreach efforts are devoted towards supporting whatever happens to be the line of the day for the Mullah’s regime in Iran.

Okay, maybe something is changed about its mission statement and hasn’t made it to the “About Us” section of their website. We’ll give them the benefit of the doubt about their aims, but what still remains puzzling is the NIAC’s almost pathological aversion to democracy.

In the run up to the March 24th deadline for a framework agreement between the Iranian regime and the P5+1 group of nations – a too-early deadline accidentally foisted by NIAC and the Iranian lobby’s own actions – the NIAC has steadily maintained that any agreement not be subject to review and vote by Congress.

It is a curious position to take on several levels. First and foremost, the NIAC might have trouble letting go of the Iranian model of government which tends to default to the autocratic side where Iran’s Supreme Leader, in this case top mullah Ali Khamenei, has sole authority over foreign policy and military matters, including any treaty or international agreement.

Contrary to that model, the U.S. Constitution in Article II, section 2, provides that the President “shall have Power, by and with the Advice and Consent of the Senate, to make Treaties, provided two-thirds of the Senators present concur.” The Constitution’s framers gave the Senate a share of the treaty power in order to give the president the benefit of the Senate’s advice and counsel, check presidential power, and safeguard the sovereignty of the states by giving each state an equal vote in the treaty making process.

It is a provision articulated by Founding Father Alexander Hamilton in the Federalist Papers no. 75 and represents a cornerstone of American policy making over the last 200 years with Senate approval given to more than 1,500 treaties, while rejecting only 21 of them. Of course there has always been considerable debate between Presidents and Senates over the meaning of “advice and consent,” but what is not ambiguous is that Presidents who have secured Senate approval, even on controversial proposals, have enjoyed broader public support for their policies.

In the case of a potential Iranian nuclear deal, NIAC has constantly urged that any agreement not be turned over to the Senate for approval. Why? Quite simply, it recognizes that any deal granting Iran the continuation of its nuclear infrastructure would be dead on arrival with a large bipartisan coalition of Senators already lining up to voice concerns over a deal.

Secondly, NIAC’s passionate arguments in favor of a deal with the Iranian regime have largely fallen on deaf ears in the U.S. This has been evidenced by the dearth of coverage given by mainstream U.S. media outlets to NIAC’s statements, as well as the inability to generate any large-scale grassroots campaign aimed at key Senators as most U.S. lobbying groups have enjoyed such as abortion activists, environmentalists, business or labor unions.

Lastly, NIAC has argued the result of no deal would be far worse than taking what essentially amounts to a bad deal allowing Iran to develop and possess a nuclear weapon in as long as ten years or in as short a period as one year if it chooses to breakout of an agreement.

But what is the realistic “bad” alternative NIAC speaks of? The threat of war? It is a far more likely scenario that war might break out if Iran’s mullahs are granted the capacity to develop a nuclear weapon because Iran’s neighbors would feel even more threatened and act to disrupt Iran’s bomb making, not to mention the flow of the most dangerous weapon in to the hands of the most evil terrorist backed by the mullahs, who run the biggest state sponsor of terrorism.

Also, at no point does the proposed agreement condition Iran’s mullahs to changing their behavior; crucial element all but ignored in negotiations. NIAC asks for blind faith in the intentions of Iran’s mullahs, even though the record of the past three years has gotten progressively worse and worse.

Iran’s continued support of terrorist groups, even expanding to include the Houthi in Yemen, in additional to the Hezbollah, coupled with its support of Syria and now Shiite militias in a virtual takeover of Iraq does not bode well as a track record for “moderation.”

But put on top the brutal human rights crackdown and violations within Iran domestically and the exporting of its fanatic views of Islam that now infect the region and are now reaching into the farthest reaches of the globe and you get the idea quickly why Senators are liable to vote thumbs down quickly.

The NIAC opposes a vote and opposes the exercise of democracy by the American people’s elected representatives because it already knows it has lost the vote.