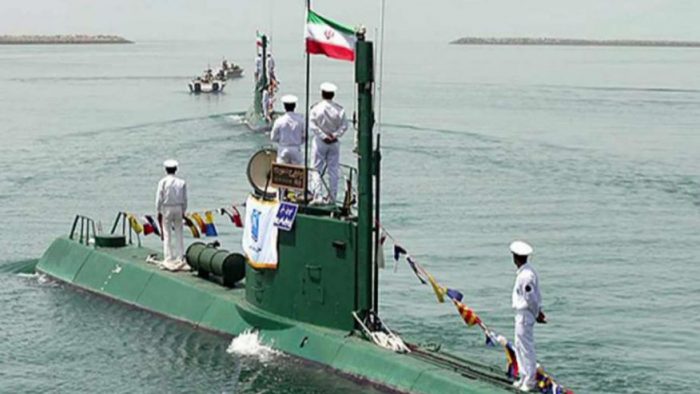 It’s no secret that while the Iran lobby was busy promising more moderation and accommodation from the Iranian regime during nuclear talks two years ago, the mullahs in Tehran were busy working over their calculators figuring out what they were going to buy with their newfound cash coming from relief from economic sanctions and the bonus of billions coming from a prisoner swap with the U.S.

Since the completion of the deal, the Iranian regime has been busy replenishing its military which was drained from years of fighting in Syria and Yemen, as well as supplying its proxies with weapons and ammunition including Hezbollah, Shiite militias and the Houthis.

More worrisome though is analysis indicating that Iran has sought to not only rebuild its military, but transform it primarily from tactical, regional actions to a more strategic, offensive posture posing a menacing threat to its neighbors, especially long-time rivals Saudi Arabia and the Gulf states.

Iranian officials announced late last month that Iran’s defense budget had increased by 145 percent under President Hassan Rouhani and that the military is moving forward with a massive restructuring effort aimed at making it “a forward moving force,” according to regional reports.

Regime leaders have stated since the Iran deal was enacted that they are using the massive amounts of cash released under the agreement to fund the purchase of new military equipment and other armaments. Iran also has pursued multi-million dollar arms deals with Russia since economic sanctions were nixed as part of the deal, according to the Washington Free Beacon.

Leading members of Congress and U.S. officials working on the Iran portfolio suspect that at least a portion of the Obama administration’s $1.7 billion cash payment to Iran  has been used to fund and support terrorists in the Middle East.

The latest disclosure about Iran’s military buildup is further fueling concerns that U.S. cash assets returned to the country—which were released with no strings attached by the Obama administration—are helping Iran pursue a more aggressive military stance against U.S. forces in the region.

Iranian Brigadier General Kiumars Heidari announced the military buildup during Iran’s annual Army Day. While the announcement did not grab many headlines in the Western media, national security insiders have been discussing the announcement for weeks, according to conversations with multiple sources.

Iran’s goal is to turn its army into an “offensive” force, a major shift from its historic role as a support agent for the Iranian Revolutionary Guards Corps, or IRGC, Iran’s extremely well funded primary fighting force.

Iran hopes to revamp its army from top to bottom, including improving logistical capabilities, weaponry, and other armaments.

The regime has also escalated its attempts to demonstrate additional military capabilities including the launching of ballistic missiles.

Another sign was an Iranian Yono-class “midget” submarine attempted to launch a cruise missile from the Strait of Hormuz on Tuesday, according to U.S. officials.  The only two countries in the world that operate this type of submarine are Iran and North Korea. The test launch was not successful, reported Fox News.  Iran had previously announced it had successfully tested a sea-launched missile and it is not known if this was the first actual submarine launch of the weapon.

The increase in military activity and emphasis on first-strike weapons and tactics is leading many to speculate what path the Trump administration will pursue to stymie the mullahs.

Much crystal-ball gazing has been going on lately, not the least of which coming from Iran lobby members such as the National Iranian American Council who hope to shape the narrative much as it did during the nuclear negotiations.

Secretary of State Rex Tillerson said last month that Iran is complying with the terms of the 2015 nuclear agreement. The positive finding of the State Department’s routine periodic review of the nuclear agreement, known formally as the Joint Comprehensive Plan of Action (JCPOA), was surprising given President Trump’s assessment that it was “the worst deal ever negotiated.” Some analysts believed Tillerson was signaling that the Trump administration would let the agreement stand rather than “rip it up” as the president had promised.

But according to James S. Robbins, a member of USA TODAY’s Board of Contributors, who served as a special assistant to the secretary of defense in the George W. Bush administration, there is something deeper going on. The key language in Tillerson’s statement dealt with the National Security Council’s inter-agency review to determine whether continued suspension of the sanctions is “vital to the national security interests of the United States.” This phrasing points to the key weakness in the structure of the deal, said Robbins.

“In addition, previously secret aspects of the deal have begun to be revealed, such as the Obama administration freeing Iranian prisoners accused of major crimes related to the nuclear and missile programs. These shady aspects of the bargain make it easier for the Trump administration to make the political case against it, which Americans opposed by wide margins to begin with,” he added.

If the National Security Council determines that Iran’s activities are not in U.S. national security interests, the president can lift the sanctions waivers. This puts Iran in a bind. Tehran has threatened it could restart its nuclear program “in a new manner that would shock Washington.” But if Iran chooses openly to violate the terms of the deal, this would activate the agreement’s Article 37 “snap back” mechanism which restores all the pre-JCPOA international sanctions. The only way the “snap back” would not happen is if the UN Security Council votes otherwise, but the United States could veto any resolution that keeps the deal alive, according to Robbins.

This puts Iran in a lose/lose position: accept renewed and potentially tougher U.S. sanctions while staying within the framework of the JCPOA; or breach the deal and suffer the “snap back” consequences. Of course, Iran could just attempt to go full-bore to develop nuclear-armed missiles as quickly as possible and hope for the best. But the developing crisis with North Korea should be instructive to Tehran. The Trump administration is less willing than its predecessors to accommodate or ignore the nuclear ambitions of rogue states.

All of which places the Iranian regime squarely in the sights of the international community for the first time in nearly four years when Iran was dragged unwillingly to the bargaining table because of the effectiveness of previous sanctions.

We shouldn’t let this opportunity slip away like the last one.