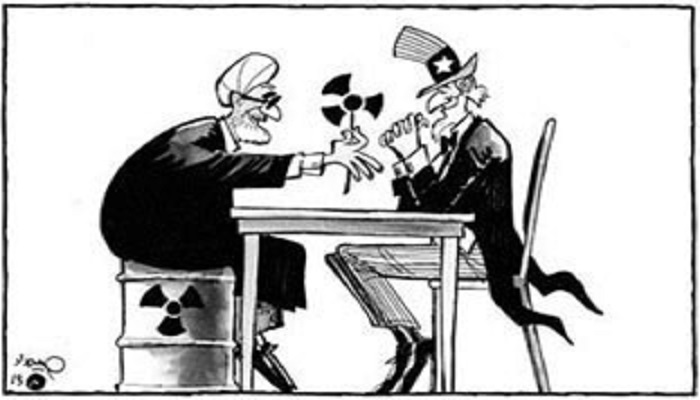 With the nuclear talks at a critical stage, a typical position by the Iranian lobby these days focuses on brokering a deal at no cost to the Iranian regime and also fulfilling the mullahs lying tactics. By labeling Mullah Rouhani a moderate with over a 1,000 executions in his first year in office is obviously wrong; and by scaring the west and the US with the threat of ‘hard-liners’ replacing Rouhani, the Iranian lobby is actually advising P5+1 to not only accept the uranium enrichment capability, but also the opportunity to keep enough centrifuges running to allow the regime to advance

A good example of such efforts is NIAC’s Trita Parsi’s article on Foreign Policy website on September 18th, 2014, which read: “…Iran’s nuclear negotiators have public opinion on their side for now. But if that disintegrates, so could any hope for a deal with the West.

“…Nuclear talks with Washington are not just about whether Tehran can continue enriching uranium; they are about which domestic political faction will be at the helm of Iranian decision-making. Will it be the moderates like President Hassan Rouhani and Foreign Minister Javad Zarif, who reject a zero-sum rivalry between Iran and the West? Or will the conservative establishment whose comfort zone is hostility toward the United States come out on top?”

Trita Parsi, who is known to lobby for the Iranian dictatorship and for his close relationship with the regime’s foreign minister Zarif, refers to ‘a recent poll’ to justify why the P5+1 must accept Rouhani’s conditions in the upcoming negotiations in New York.

He writes: “While all indications show that the public supports a deal, a new poll by the University of Maryland may shed light on the thinking behind Iran’s negotiating position, but also explain why the Rouhani government may think it can live with a no-deal scenario.”

He is suggesting the new poll will confirm his conclusion.  The study by the University of Tehran Center for Public Opinion Research on Iranian Public Opinion, which given the suppression and lack of any democracy in Iran, is only what the religious dictatorship would approve.  Therefore the entire article is relying on nothing but false information to derive a false conclusion and misinform public opinion, and perhaps the persuade politicians and those of influence in Washington DC to do what NIAC is suggesting, that is to say, to act with leniency in negotiations with the regime delegation.

This is while the EU ‘is disappointed with the very limited progress on PMD (possible military dimensions)’ regarding the regime’s nuclear activities, the EU statement said on the 18th of September, 2014.

Trita Parsi also refers to the ISIS issue and suggests “…Washington cannot afford to be at war with the Islamic State, where Tehran’s help is needed (if covertly), while also being at war with Iran.”

In other words, the Iranian Lobby is trying to play with the rifts within the mullahs regime to justify the continuation of the appeasement policy towards Iran. This is while the Iranian people do not distinguish between Rouhani and his predecessors as nothing has changed when it comes to repression and violation of human rights in Iran.

Nuclear weapons is part of this regime’s strategy for survival; firmness, comprehensive sanctions aimed at implementation of the Security Council resolutions, a complete halt to all enrichment, and acceptance of the Additional Protocol is the only way to prevent it from acquiring a nuclear weapon. Anyone asking for less under any justification is either unaware of the Iranian regime’s history of lying or is intentionally misinforming the public in favor of the Iranian dictatorship.