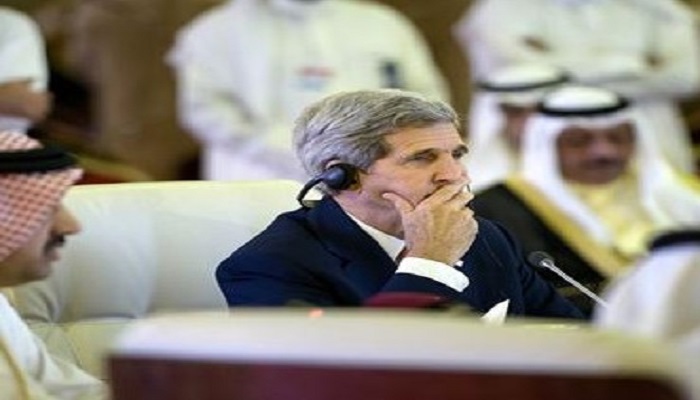 A new Quinnipiac University poll published yesterday was a brutal refutation of the arguments being made by supporters of the Iran regime and its proposed nuclear weapons deal. In it, only a meager 28 percent of Americans said they approved of the deal with the mullahs in Tehran, compared to 57 percent who said they disapproved of the deal, with the vast majority of respondents saying the deal would make America less safe.

Even more unnerving for supporters of the regime, President Obama’s approval rating in handling the situation in Iran plummeted from a high of 48 percent in 2013 to an anemic 35 percent in this latest poll; reinforcing the perception amongst voters that the deal is not only a bad one, but a stinker.

The Quinnipiac poll mirrors the dissatisfaction measured in a Pew Research Center poll released earlier and reinforces the downward trend line in public opinion, despite the protestations by regime lobbyists such as Trita Parsi and Reza Marashi of the National Iranian American Council who have shouted to the rooftops that the choices before Americans is between war and peace. In fact, Americans are coming to the realization the choices are really between a struggling, anemic Iran and a robust, flush with cash Iran.

The decline in public support by American voters has undoubtedly been influenced by a steady stream of revelations about the deal, including the existence of secret side agreements reached between the Iran regime and the watchdog International Atomic Energy Agency.

Reza Najafi, Iran’s ambassador and permanent envoy to the IAEA, stated over the weekend that no country is permitted to know the details of future inspections conducted by the IAEA. In addition, no U.S. inspectors will be permitted to enter Iran’s nuclear sites.

“The provisions of a deal to which the IAEA and a second country are parties are confidential and should not be divulged to any third country, and as Mr. Kerry discussed it in the Congress, even the U.S. government had not been informed about the deal between IAEA and Iran,” Najafi was quoted as saying by Iran’s Mehr News Agency.

Due to the secretive nature of these agreements, IAEA officials vising with lawmakers are barred from revealing to them the details of future inspections.

The revelation has rattled lawmakers on Capitol Hill, several of whom are now rallying colleagues to sign a letter to President Barack Obama protesting these so-called side deals, but more importantly the existence of the secret deals and the statements by regime officials tells us exactly how the regime operates. It professes support for cooperation while secretly planning to take advantage of that appeasement.

In another sign the Obama administration was struggling with its messaging with regime supporters, Secretary of State John Kerry flew to Doha to meet with Arab states in the Persian Gulf in an attempt to reassure them about the deal, but in a clear sign that even the U.S. doesn’t believe the Iran regime’s intentions are peaceful, Kerry reassured Gulf states the U.S. would speed up arms sales to them included ballistic missile defense systems to counter the expected development of Iranian missile technology that was left out of the nuclear deal by the U.S. in the first place.

The irony would comical if it wasn’t so serious.

“The agreement legitimizes Iran’s nuclear program, pretty much guarantees its ability to produce nuclear weapons in 15 years, and will make it a far wealthier country than it has been in three decades. The regime will have more money to demonstrate immediate economic gains, and access to international markets to make those gains permanent. It will have more money — coupled with the lifting of the arms embargo — to purchase weapons from Russia to challenge U.S. military access to the Persian Gulf. And it will have a lot more money to augment its asymmetrical capabilities,” said Michael Gerson in the Washington Post, adding to the building arguments against the deal.

“Thus the inexorable pattern will not be: Iran violates the deal; sanctions snap back; Iran resumes compliance. Quite the reverse. The far more likely future is: Iran violates the deal; sanctions snap back; Iran tells us, using a diplomatic term of art, to take our deal and stuff it,” said former U.S. ambassador to the United Nations John Bolton in an editorial in the New York Times. “Unfortunately, snapback sanctions are just as likely to be empty political rhetoric”…”The list of reasons to oppose the Vienna deal is already long, but the pitfalls of snapback sanctions surely rank near the top.”

It goes without saying that the deal empowers the Iran regime and provides very little ability to halt the expansion of Iran’s particular form of virulent Islamic extremism, which remains the mullahs’ highest priority as they expand their dominion over Syria, Lebanon, Iraq and Yemen and now threaten Saudi Arabia and the Gulf states.

The regime recognizes the stakes and is working aggressively to curb any dissent domestically and ensure one a convincing message of moderation is presented for consumption in the West.