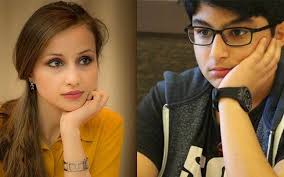 There are lots of reasons why teenagers get punished. They stay out too late. They get bad grades in school. They drink alcohol or take drugs.

Why then would an 18-year-old chess prodigy who has achieved the exalted status a grand master get punished? Did she fail to sacrifice her queen to win a gambit?

In the case of

, when she competed at the Tradewise Gibraltar Chess Festival last month, she committed a grave act in the eyes of the Iranian regime; she chose to wear a simple headband instead of a mandated hijab head covering while she played.

As a result of this grave act, Mehrdad Pahlevanzadeh, the head of Iran’s Chess Federation, ruled this week that Derakshani would be kicked off the national team.

Derakhshani’s younger brother Borna, 15, who also entered the tournament, was also kicked off the team. His offense was agreeing to play an Israeli opponent, according to the Washington Post.

Let’s forget for a moment that kicking a grand master off your national team is akin to benching LeBron James before the Olympics, but punishing children is even more absurd.

“Unfortunately, what shouldn’t have happened has happened,” Pahlevanzadeh told the semiofficial Fars News Agency on Monday (via Radio Free Europe). “Our national interests have priority over everything.”

“As a first step, these two will be denied entry to all tournaments taking place in Iran,” he continued, “And, in the name of Iran, they will no longer be allowed the opportunity to be present on the national team.”

That the two young chess masters received such a harsh punishment is not a surprise. Sports in Iran and other parts of the Middle East have long been affected by the region’s strict cultural norms and precarious political stance.

Last year, American chess master Nazi Paikidze did not compete in the chess world championships in Iran because of the country’s requirement that she don a hijab, said the Post.

“Some consider a hijab part of culture,” Paikidze said in an Instagram post announcing her decision. “But, I know that a lot of Iranian women are bravely protesting this forced law daily and risking a lot by doing so. That’s why I will NOT wear a hijab and support women’s oppression.”

The controversy over the hijab is incidental to the larger issues it represents which is the near constant oppression of Iranian women in a society that legitimizes misogyny, allows for the public beating of women found in violation of dress codes, and regularly arrests girls and women who post on social media selfies in which they do not wear head coverings.

The fact that the Iranian regime uses sports and competition as platforms to advance its views is nothing new. The recent welcoming entry of an American wrestling team to wide media coverage stands out in sharp contrast to the disqualification of these teenaged prodigies.

It is also interesting to see the silence from the Iran lobby on this subject. While groups such as the National Iranian American Council have been vociferous in its protests of social issues such as the controversy over President Trump’s immigrant visa moratorium, it has been stone-dead silent on issues such as the rights of women in Iran and the abuse they suffer at the hands of the regime’s dreaded morality police.

The contrast and hypocrisy is stunning.

It may also explain why American views of the leadership in Iran has plunged to all-time lows in spite of the full-court public relations offensive put on by the Iran lobby.

An annual survey by Gallup on Americans’ views of foreign countries earlier this month revealed that Iran and North Korea were the least liked countries out of the 21 on the list.

The poll was conducted before recent events such as North Korea’s ballistic missile test in violation of U.N. resolutions and the assassination of North Korean leader Kim Jong Un’s half-brother.

It does put into perspective though that in spite of the efforts by the Iran lobby to portray Iran as a moderate state, its militant actions such as intervention in Syria and support for a civil war in Yemen, along with its recent launches of ballistic missiles have firmly convinced the American people that the Iranian regime’s leadership is dangerous and untrustworthy.

Also noteworthy was a call by 100 leading Iranian dissidents to Congress to investigate the Iran lobby’s efforts to influence U.S. policy through its network of lobbyists and spin doctors.

The group of dissidents, composed of prominent Iranian voices that oppose the hardline regime in Tehran, says that Congress is not doing enough to expose the Iranian regime’s lobbying efforts in D.C. and propaganda network, which is said to include some at Voice of America Persia.

Iranian-American groups claiming to represent American interests are said to be carrying water for the Islamic regime inside the White House and on Capitol Hill, according to these dissident voices.

The letter cites VOA’s Persian service as a source of pro-Iran corruption. The Free Beacon has reported multiple times on claims that VOA has been infiltrated by Iran regime loyalists who seek to spin coverage in a favorable way for Tehran. In one instance, an Iranian dissident was barred from appearing on VOA Persia for voicing critical opinions about the regime.