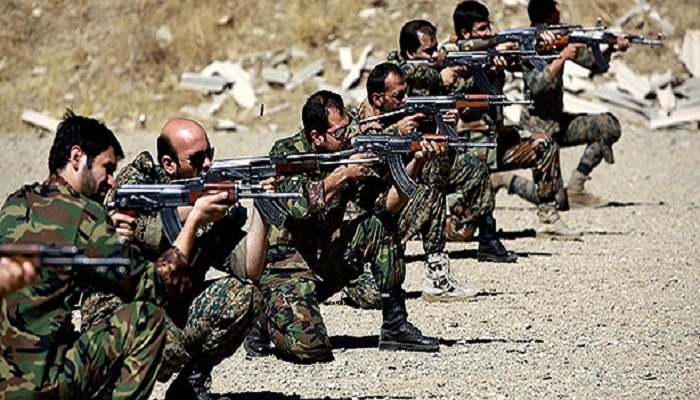 Reuters reported that hundreds of fresh Iran regime troops have flooded back into Syria over the past 10 days and will soon join their Hezbollah allies in a major ground offensive backed by Russian air strikes aimed at retaking territory lost by the Assad regime to rebels; contrary to Iranian and Russian claims they would be focusing their attacks against ISIS.

It seems clear the mullahs in Tehran are focused on securing the Assad regime by eliminating Western-backed moderate rebel units, rather than tackling their Islamic State rivals. The new offensive clearly points out the false propaganda the regime has been pumping out through its lobbyist allies such as the National Iranian American Council.

Peace is certainly the end goal for the Iran regime, but a peace that eradicates any opposition to Assad and leaves Iranian mullahs in control of a swath of territory stretching from the Mediterranean through Syria, Iraq, Iran, Yemen and the Indian Ocean. Their territorial ambitions have come fully to light and the bill for accommodating the regime with the nuclear deal is finally coming due.

“The vanguard of Iranian ground forces began arriving in Syria: soldiers and officers specifically to participate in this battle. They are not advisors … we mean hundreds with equipment and weapons. They will be followed by more,” said a Lebanese military source, adding that Iraqis would also take part in the operation.

Interestingly, Hassan Rouhani, the handpicked puppet leader of the Iran regime, tipped the regime’s hand in his speech before the United Nations last week in which he firmly insisted that U.S. policy should be focused on common actions to defeat ISIS before any discussion takes place on the future of Assad. Rouhani laid out the narrative in which the regime justifies the placement of boots on the ground in Syria openly and blatantly instead of relying on proxies such as Hezbollah in what is sure to be a virtual takeover of Syria by the Iranian military.

As Gareth Porter, an appeaser of the mullahs points out in Middle East Eye, “Iran’s national security strategy has had two primary objectives ever since Khamenei became Iran’s leader: to integrate the Iranian economy into the global system of finance and technology and to deter the threats from the United States and Israel. And Rouhani had primary responsibility for achieving both tasks.”

We are now witnessing what the Iran regime’s future plans are now that they have secured these twin goals and it is causing renewed efforts in Congress to stymie the regime in spite of the nuclear deal.

The House voted Thursday by the hefty margin of 251 to 173 to stop the Obama administration from lifting sanctions against the Iran regime “until Tehran pays the $43.5 billion it still owes in damages to the families of terror victims in cases where responsibility can be linked back to Iran — such as the 1983 bombings of the U.S. Embassy and Marine barracks in Beirut and Hezbollah’s 1985 hijacking of TWA Flight 847,” said the Washington Post.

“Should Iran receive United States sanctions relief before it pays the victims of its terrorism all of what U.S. courts say those victims are owed?” said Rep. Patrick Meehan (R-Pa.), who introduced the measure. “I say no. Not one cent.”

If the survivors or victims’ relatives are not paid now, “it definitely won’t happen later,” House Foreign Affairs Committee Chairman Edward R. Royce (R-Calif.) said. He argued that Iran would spend the money freed up from sanctions relief on building up its military force and other nefarious activities, rather than paying the balance of restitution payments ordered by U.S. courts.

Those same voters may also be alarmed at news coming out of Tehran in which Saeed Abedini, the Iranian-American pastor serving an eight-year prison sentence on charges of undermining national security may face more trumped up charges by the regime, including links to antigovernment groups, said Naghbeh Abedini, his wife. Abedini is one of four Americans being held hostage in Iranian prisons including Washington Post reporter Jason Rezaian and former Marine Amir Hekmati.

The move by the regime to place new charges on Abedini flies in the face of the PR move made by Rouhani at the UN in which he floated the idea of a prisoner swap for 19 Iranian agents convicted on arms trading and smuggling of nuclear components.

All of which leads us full circle back to the question of how to check the ambitions of the mullahs in Iran and in what form? One answer was provided by Mrs. Maryam Rajavi, the president-elect of the National Council of Resistance of Iran, a coalition of Iranian opposition groups, who wrote an editorial in the New York Daily News.

“My message to the United States and the West is that the long-term solution to the Iranian threat lies neither in foreign military intervention nor in collaboration with a regime that is so oppressive at home and so destabilizing abroad,” she said.

“With the nuclear deal, however misguided it may be, in place, the right policy going forward is to encourage and support the Iranian people’s desire for democratic change and to speak out for human rights,” she added.

Sound advice the West would be wise to follow.