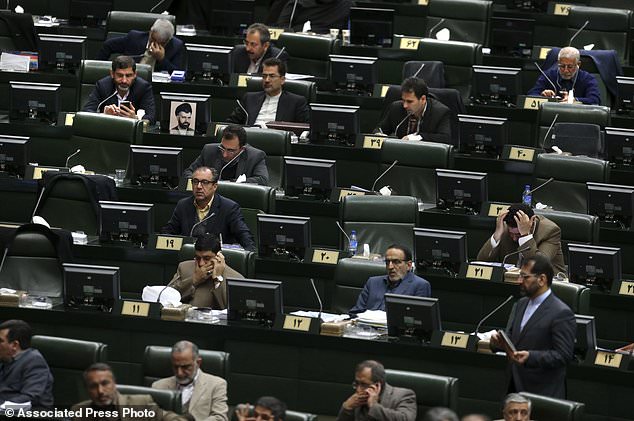 In this photo taken on Sunday, Feb. 19, 2017, lawmakers attend an open session of the Iranian parliament in Tehran, Iran. Iran’s parliament voted overwhelmingly Sunday, Aug. 13, to increase spending on its ballistic missile program and the foreign operations of its paramilitary Revolutionary Guard, chanting “Death to America” in a direct challenge to Washington’s newest sanctions on the Islamic Republic. (AP Photo/Vahid Salemi)

The Iranian regime parliament burnished its hardline credentials by approving an enormous boost in spending for its ballistic missile program and its Quds Forces within the Revolutionary Guard Corps, which has been at the heart at virtually all the proxy wars Iran is currently fighting throughout the Middle East.

The estimated $609 million boost will be divided evenly between the Quds Forces and missile effort, which the regime called the nation’s “deterrent capability,” according to regime-controlled Tasmin news agency.

Some lawmakers chanted, “death to America” as the bill was passed, according to state media.

The increase in funding comes as no surprise as the Iranian regime has steadily been funneling millions of dollars to fund its growing military commitments and support for proxies and terrorist organizations such as Hezbollah in Syria, Shiite militias in Iraq and Houthi rebels in Yemen.

If we think back to the completion of the Iranian nuclear agreement two years ago, the Obama administration shipped pallets full of cash via Iranian airliners in exchange for the release of American hostages. There were no conditions attached to the money which undoubtedly found its way to support Iran’s efforts to save the Assad regime in Syria.

Also, the Iranian regime does not report funding for its military nor for its paramilitary operations through its Quds Forces so we really don’t know how much money Iran really is spending on its missile and terror programs, but there can be little doubt the mullahs consider both high priorities.

Hassan Rouhani, the regime’s president, essentially tried to blame the Trump administration’s levying of new economic sanctions as the reason for the increase in funding, as well as the president’s public statements promising to rip up the nuclear deal.

“Anyone who harms the accord harms himself and his country,” Rouhani was quoted as saying by the Iranian Students News Agency. If the U.S. seeks to act against the agreement “everyone will side with us and against the person who wants to weaken it” he said in reference to other signatories to the deal including Germany and France, which have expressed their support for its continuation.

The move by the regime to boost its missile program comes in the wake of fellow rogue state North Korea’s rapid push into launching ballistic missiles capable of reaching the U.S. mainland, as well as intelligence reports that North Korea now possesses at least one nuclear device capable of being mounted on a missile.

It also follow’s North Korea’s threats to turn waters around the island of Guam and home to a sprawling U.S. naval base into a sea of fire with multiple missile strikes.

The roadmap North Korea has laid out in its missile and nuclear development is being closely followed by the Iranian regime in spite of the false promises consistently made by the Iran lobby that Iran was not pursuing nuclear capability.

North Korea’s licensing of its missile technology to Iran gave the regime a head start on missile development and provided a much-needed source of cash to the North Korean regime as it become the most isolated and sanctioned nation in the world.

In fact, North Korea’s Kim Yong Nam, the speaker of the parliament, attended Rouhani’s swearing in ceremony last week in a sign of the hermit kingdom’s close ties with the Iranian regime.

This isn’t Yong Nam’s first trip to Iran. He also visited in 2012 to attend the Non-Aligned Movement’s summit in Tehran. Then as now he was in the country for about 10 days, making many official visits and appearances, signing agreements for technical and educational cooperation between Iran and North Korea, according to the Daily Beast.

“Unfortunately, North Korea cheated. It maintained a secret uranium-enrichment program, and the deal collapsed soon after the Bush administration confronted the North Koreans with evidence of their noncompliance,” French added.

French goes on to point out that given this history, the Iran Deal may have been the worst possible model. For example, agreement with Iran famously provides the regime up to 24 days of notice before inspectors are allowed access to some suspect cites, and a regime with a record of cheating like North Korea’s is the worst possible regime to grant any leeway or any trust.

Moreover, the same deal granted Iran enormous economic benefits, access to international arms markets, and the ability to build ballistic missiles. A similar deal with North Korea would have the potential to supercharge the DPRK threat.

Instead, the Iran deal has pumped hundreds of millions of dollars into Iran which the mullahs are now funneling into the IRGC. North Korea demonstrates clearly that relying on “trust” to verify a nuclear agreement fails miserably when the rogue regime in question can’t be trusted in the first place.

The bolstering of Iran’s missile fleet and Quds Forces comes at the worst possible time for hopes of regional stability as Iran is now deeply involved in full-blown war and covert subversive campaigns in Syria, Iraq, Bahrain, Qatar, Kuwait, Yemen and now recently fired mortars and rockets along the Pakistan border.

All of the promises made by groups such as the National Iranian American Council that Iran would be a moderate force with the nuclear deal passed have been proven false and the world is now going to live under the threat of Iranian missiles because of it.