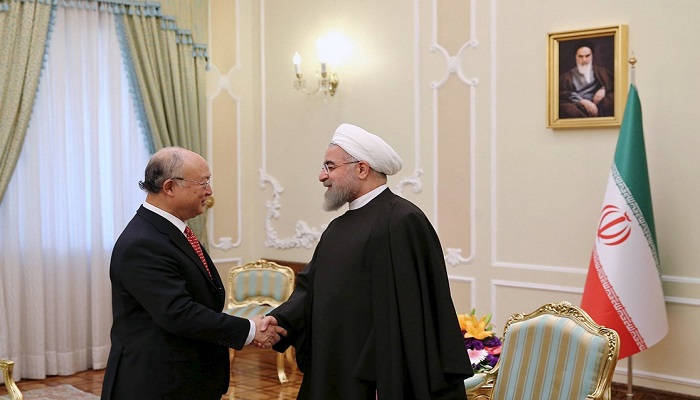 The Iran regime revealed it took its own samples at the Parchin military site as part of the secret side deal it made with the International Atomic Energy Agency as the head of that agency, Yukiya Amano, was in Iran to visit the site and give what appears to be his support of the regime’s handling of the self-inspection protocol.

The regime’s state-run IRNA news agency quoted a spokesman for the Iranian atomic energy agency, Behrouz Kamalvandi, as saying samples were taken at Parchin “only by the Iranian experts and without the presence of the agency’s inspectors.”

The fact that regime state media described Amano’s visit as “ceremonial” rather than an inspection tells you all you need to know of how the regime viewed the self-inspection process.

Sen. Tom Cotton (R-AK), a chief critic of the Iran nuclear deal, pointed to the regime’s latest disclosures as more evidence of the flaws in the nuclear agreement.

“The fact that Iran is taking its own soil samples shows that the verification scheme is an embarrassing charade, and yet another concession we can add to the pile of concessions that make up the dangerous Iran deal,” he said.

Even though the IAEA has had a long history of complaints lodged against the regime over the last decade for non-compliance, including not answering basic questions about the history of its nuclear program and its military dimensions, as well as the failure of the regime to make nuclear scientists and technical personnel available for interviews, the IAEA has seen fit to enter into a secret deal with the mullahs and not make it available to the rest of the world.

The fact that we even know about the self-inspection protocol and lack of international oversight of sampling from the Parchin site is due more to the intrepid reporting of journalists at the Associated Press than to any government disclosures from the United Nations or P5+1 group of nations that negotiated the deal.

The Obama administration, already duped into believing the regime will not cheat on an already badly flawed agreement, claimed that the self-inspections are a step in the right direction.

Breitbart.com reinforced the absurdity of self-inspection by reminding us the Congress was never shown the IAEA side deal, the regime was allowed to “sanitize” the Parchin site and hand-picked the areas to be sampled and handled the cameras taping the sampling that IAEA officials were watching.

You could not have asked for a more orchestrated act than if you paid a Hollywood studio to stage it.

The regime is certainly not wasting time flexing its new-found freedoms, not only by manipulating what will assuredly be a clean bill of health of Parchin, but also in busily acquiring new, advanced weapons and military hardware and arming its terrorist allies such as Hezbollah.

Al-Rai, a Kuwaiti newspaper, reported this weekend that Hezbollah received all of the advanced weaponry that the Syrian regime has obtained from Russia as the Russians have dramatically boosted their military operations with boots on the ground, tactical fighters flown to Syrian bases and new tanks being off-loaded.

The fact that all these military developments occurred since the nuclear deal was signed, demonstrates clearly the mullahs in Tehran feel extremely confident about their new-found status as international players and intend to flex their muscle visibly and without deception.

But the sales job for the Iran lobby never ends as Trita Parsi, the head of the National Iranian American Council, went on World Finance to laud the financial windfall the regime is due to receive because of the imminent lifting of sanctions. He continues to advance the absurd proposition that the regime’s newly emerging economic muscle could be used as a moderating influence in the region.

What he fails to discuss is the intent of the ruling mullahs. No one doubts that Iran can be a major economic player in the region; the only question was whether or not the mullahs primary mission was to improve the economic status of their people or push further their brand of fundamentalist Islamic faith? History demonstrates ably that the mullahs have no other concern than preserving and expanding their extremist views throughout the Muslim world.

Parsi’s statements about Iran’s economic potential are only one half of a joke, the real punchline comes with what the mullahs decide to do with all that newfound economic muscle. The unfortunate part is that the joke will be on those who supported and approved this deal based solely on the “hope” that Iran’s mullahs could be worthy of trust.

Nothing could be further from the truth.