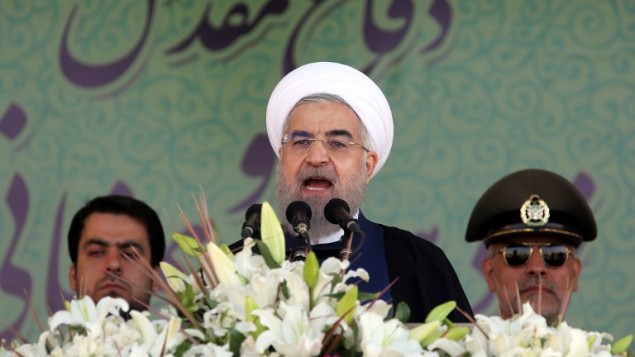 In advance of Hassan Rouhani’s scheduled address to the United Nations General Assembly next week, the regime leader has been on a mission to push out as many absurd lines of logic as we have ever seen since his handpicked ascension by his mullah colleagues.

This past weekend saw him make his debut on the news program “60 Minutes” in which he tried to explain the weekly “Death to America” chants led by the regime’s top mullah Ali Khamenei.

Now according to the official state news agency, Rouhani spoke at a rally in Tehran to commemorate the anniversary of the start of the Iran-Iraq War in 1980, in which he claimed the regime’s military forces were the best defense against the spread of terrorist groups including ISIS.

“Today we tell the world that the biggest antiterrorism force is the armed forces of the Islamic Republic,” Rouhani said in what may be the biggest bald-faced lie uttered since British Prime Minister Neville Chamberlain claimed “peace in our time” after meeting with Adolf Hitler.

It is a well-documented fact that the Iran regime has been the largest state sponsor of terrorism on the planet with decades-long support given to Hezbollah in Lebanon and Syria that targeted American military personnel, Shiite militias that used IEDs to attack coalition forces in Iraq and Houthi rebels that overthrew the government in Yemen and took foreign hostages including Americans.

Rouhani’s statements would be laughable if they weren’t so dangerous as part of a broader PR narrative being pushed by the regime and its lobbyist allies such as the National Iranian American Council to perpetuate the myth that Iran is a moderating force for good in the world.

But the regime is not a force for good. It is a nation ruled with an iron fist by a cadre of mullahs practicing a perverted extremist version of Islam that it intends to export as aggressively as possible. The comparison and contrast to another leader of a world religion is stark and unmistakable as Pope Francis begins his tour of the U.S.

While Pope Francis leads over 1 billion Catholics worldwide and maintains no army, no air force, no industrial facilities, and no nuclear program, the Iran regime is a state run by religious radicals intent on using the full facilities of a nation state to advance their aims. The comparisons could not be more striking.

Nor could the heartfelt pleas made by Naghmeh Abedini to Pope Francis on behalf of her husband, imprisoned pastor Saeed Abedini, who languishes in an Iranian prison along with three other Americans be mistaken for anything other than pleas for compassion and leniency aimed at a regime that knows neither.

Scores of Iranian political activists and intellectuals have also launched an online campaign calling on the regime to end its support for Syrian President Bashar al-Assad and take in Syrian refugees fleeing violence there.

The more than 70 activists, who include several former political prisoners, blame Assad and his foreign supporters, including Tehran, for the exodus of tens of thousands of Syrian refugees to Europe.

They have launched a Facebook page called Sorry, Syria, where so far about two dozen users have expressed “shame” over Iran’s assistance for Assad’s “crimes” and warned that silence could be interpreted as consent.

The regime’s deep involvement in Syria has not only sparked the mass exodus of refugees, but laid deeper rifts in the region with consequences that will likely take decades to fully play out. The Guardian newspaper took an extensive look at the Iran regime’s growing role in Syria’s military command and control efforts.

“Iran has certainly provided a financial lifeline to Assad since the 2011 uprising, releasing billions of dollars of loans and credit for imports of oil and other commodities. Another important contribution was setting up the national defence forces (NDF), locally-based militia units outside the regular army, which have acquired a reputation for profiteering and brutality,” according to the Guardian.

So as Rouhani trolls news media pushing his messages of moderation and his PR allies tow the party line, the situation throughout the Middle East and now Europe grows more dire with escalating conflicts, mass refugee movements and now the involvement of Russia’s military to a significant degree.

As the International Atomic Energy Agency takes nuclear selfies of regime officials taking their own soil samples from the Parchin military site without international supervision as part of its secret side deal, it’s worth noting that not only is Rouhani towing the mullahs’ line, but IAEA chief Yukiya Amano is doing the same song and dance.