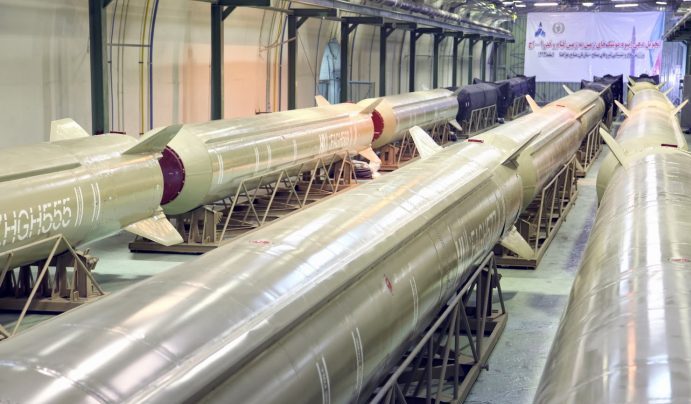 Just as the world saw North Korea ramp up its production of ballistic missiles and begin launching them with greater regularity, we have seen a similar scenario begin to play out with the Iranian regime’s own missile fleet.

For the mullahs in Tehran, their ballistic missile fleet represents their ace in the hole; a weapon platform that can reach faraway enemies, threaten its neighbors and provide the ultimate leverage by carrying nuclear or chemical warheads.

You don’t build a weapon system unless you are prepared to use it and the mullahs are prepared.

What distinguishes the Iranian regime from North Korea is that Iran has fired its missiles in anger, unleashing a salvo of missiles at targets in Syria that it claimed were ISIS strongholds.

With one action, the mullahs served notice they were more than willing to push the proverbial red button; a disturbing thought when one considers the regime’s extensive list of enemies which seems to grow longer by the day.

Besides its nemesis in the U.S., the regime has added Saudi Arabia, Bahrain, Kuwait and Pakistan to its list, not to mention anyone following the Sunni, Christian, Jewish and any other faith you can think of.

Add to that the increasing range of its missile fleet and you can see how Iran is able to drop missiles on virtually anyone it thinks is a threat to the regime.

According to the Center for Strategic and International Studies, Iran possesses the “largest and most diverse missile arsenal in the Middle East” with literally thousands of short- and medium-range missiles stockpiled on mobile launchers and underground bunkers.

Maps overlaid with the range of its missiles, shows that Iran can strike targets as far away as India, China and Russia to the east and most of Europe and North Africa to the west.

It’s Shahab-3 missile has a range of over 2,000 km with a payload capacity heavy enough to accommodate a nuclear or chemical warhead of over 2,000 lb.

The Iranian regime has used this weapon system to hint strongly at the U.S. that its military bases in the Middle East are subject to being destroyed by Iran’s missiles; a not too subtle threat that raises the level of tensions in the region despite the reassurances of the Iran lobby.

Iran’s Revolutionary Guards Corps Commander Major General Mohammad Ali Jafari demanded Wednesday the U.S. withdraw all its military bases within 1,000 kilometers of Iran’s borders, a distance that encompasses most of the U.S.’s operations in the Middle East and Afghanistan, including massive bases in Bahrain, Qatar and Kuwait.

The U.S. bases in the Persian Gulf are especially problematic for the Iranian regime since they present a direct challenge to the regime’s authority in what it considers its territorial waters and has often acted to threaten and imped international shipping through the Gulf; recently culminating in the detention of two American navy patrol boats and their crews.

Jafari made his threats because he is worried, as are all the mullahs, that the Trump administration is incrementally acting on its campaign promises to get tough on the Iranian regime and actively encourage regime change.

While the Obama administration, with the not so subtle direction and guidance of the Iran lobby, sought to keep various issues separate from the nuclear deal it negotiated including Iran’s missile fleet, the Trump administration is acting aggressively on those other fronts much to the consternation of the mullahs.

By levying new sanctions on Iran this week, as well as openly contemplating designating the IRGC as a foreign terrorist organization, President Trump is setting up a slow, methodical and thorough constricting of the regime’s finances and ability to export its brand of terrorism.

Trump is resetting the playing board to the conditions prior to the nuclear deal negotiations in which sanctions had crippled Iran and threatened to topple its regime leadership. The president is undoubtedly taking a course of action that can only lead to one goal which is regime change.

It is logical to assume that the U.S. would react violently and unilaterally should the Iranian regime use any of its missiles against U.S. personnel directly, which makes much of the threats by Jafari and other regime leaders empty and hollow.

On the border between Syria and Iraq, the U.S. already flexed its muscle when Navy jets attacked a convoy of Iranian-backed Shiite militia that were approaching a Syrian rebel base occupied with U.S. advisors. We can only imagine what would happen if Jafari were to lob a Shahab missile at a U.S. base in Afghanistan for example.

The mullahs in Tehran are reactionary, bellicose and even blood thirsty, but they are not crazy. They understand that their options are shrinking and Trump is only a few steps away from not certifying Iran in compliance with the nuclear agreement and triggering the 60-day review period for open debate in a Congress that has already shown bipartisan hostility to the regime.

From that point, it’s only a proforma matter before President Trump nullifies the Boeing deal, cuts off Iran’s access to U.S. currency markets and begins to penalize foreign businesses for investing in Iran.

In short order, the mullahs could find themselves back in 2009 where the economy was in shambles and an unpopular president was being met with massive street protests that rocked Tehran for days.

The recipe for regime change is well known and the mullahs are doing everything they can to avoid a repeat which is why they are so eager—or desperate—to threaten everyone with a rain of ballistic missiles.