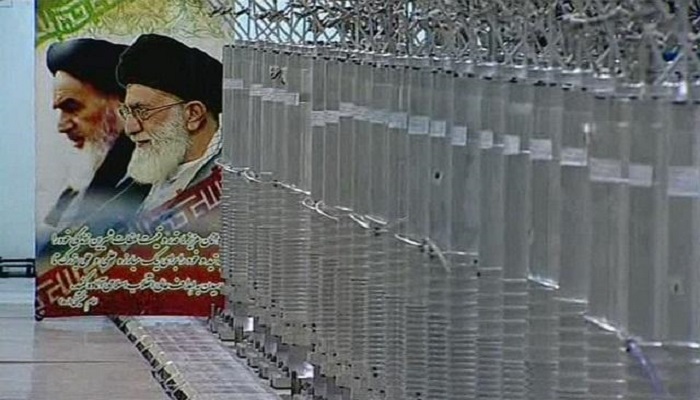 The 159 pages in the nuclear agreement with the Iran regime is by the standards of most international agreements, pretty flimsy, but even its meager few pages specify clearly the expectations the rest of the world has for the regime’s centrifuges used to enrich uranium: dismantling them.

The halt in work was announced by Ali Shamkhani, secretary of the National Security Council for the regime, who was quoted as saying by the ISNA student news agency that “the (dismantling) process stopped with a warning.”

He did not specify what the warning was or who issued it, but the head of the regime parliament’s nuclear deal commission, Alireza Zakani, told Mehr news agency that the dismantling had stopped in Fordow because of a letter to Hassan Rouhani from a group of lawmakers complaining that the dismantling process was moving too swiftly and contradicted directives from top mullah Ali Khamenei.

Khamenei has publicly stated his opposition to several terms within the treaty, including refusal to allow regime military facilities to be inspected and the need for all Western sanctions to be lifted at once before the regime would comply fully with the agreement.

Khamenei has also said the deal should only be implemented once allegations of past military dimensions of the regime’s nuclear program had been settled.

The International Atomic Energy Agency is expected to announce its conclusions on PMD by Dec. 15, according to Reuters.

The 10,000 older, decommissioned centrifuges are only half of what the regime has available to it to enrich low-grade uranium into highly enriched weapons-grade fuel. The nuclear agreement only allows for the regime to actively use a few thousand centrifuges for medical and scientific research purposes.

As Rick Moran in American Thinker notes, “there’s very little difference between the so-called ‘hardliners’ and those the Western press has designated as ‘moderates.’ And Rouhani may try to use the hardliners as an excuse to not fully implement the deal.  Supreme Leader Khamenei has already redefined key elements of the deal to favor Iran’s nuclear program, which Rouhani will probably cite when he violates the terms of the agreement as we go along.”

It is clear now that the regime has no intention of complying with the nuclear agreement and in fact is doing everything it can to push the West with aggressive moves designed to take advantage of the Obama administration’s lame duck political status and lack of desire to force a confrontation on the eve of U.S. presidential elections.

This is why the mullahs in Tehran have doubled down on wiping out opposition to Assad in Syria with a new offensive alongside Russia, test fired a new ballistic missile that violates United Nations Security Council restrictions, attacked and killed Iranian resistance members in Iraq, smuggled new arms to Houthi rebels in Yemen, completed the sale of advanced anti-aircraft missiles from Russia, and cracked down at home by arresting and jailing dissidents and inflaming ethnic tensions with the Azeri minority group in northern Iran.

All of this has been done because the mullahs have already decided to break from the nuclear agreement and see the opportunity for significant gains in the absence of any real threat of retaliation from the U.S. and the rest of the world.

As the Iran lobby, led by the National Iranian American Council, put so eloquently during the debate over the nuclear agreement, the choice for Americans was between “war” and “peace.”

In fact, they were correct, but only in reverse. Approving the pact has surely put the world on a more dangerous path towards greater conflict, while rejecting it may very well have stopped Iranian aggression and brought about stability in the region.