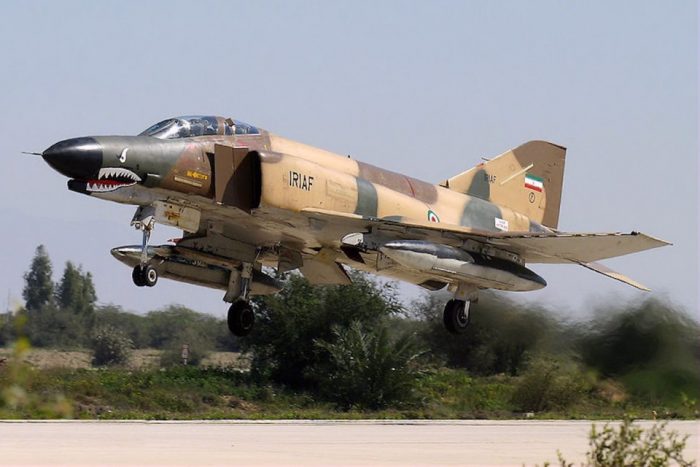 Iran Regime Bulks Up Military In Grab for Power

With the nuclear agreement reached almost two years ago, the Iranian regime has used the $1.7 billion cash it received from the Obama administration as part of the swap for American hostages to help solidify its precarious position in Syria, while it has used new oil revenues to pump badly needed cash back into its military operations depleted from years of war abroad.

With three conflicts going on in Syria, Iraq and Yemen, the mullahs placed a priority in supplying the terrorist proxies doing the heavy lifting for the regime such as Hezbollah, but they have also expanded the scope of their funding to include Afghan mercenaries recruited among the multitude of refugees living in Iran, as well as transporting Shiite militias from Iraq to fight in Syria.

The expenditure of ammunition, weapons and arms has been prodigious as the Iranian regime has been the sole supplier to the Houthis in Yemen waging a protracted civil war against the elected government.

The drain in foreign currency has exacerbated the regime’s economy to the point where the rial has plunged against the U.S. dollar and ordinary Iranians still struggle with anemic wages and an economy that is not capable of meeting basic needs leading to widespread discontent.

For the mullahs though the priority is on their military, especially since the Revolutionary Guard Corps leadership controls much of the Islamic state’s economy and reaps tremendous personal wealth from the skimming and corruption running through it.

With that emphasis on the military come the needs to constantly bolster the image of the regime’s armed forces, even if most of the boasting is illusory and aimed more for propaganda effect than practical military applications.

The Iranian regime constantly boasts of new military inventions such as patrol boats, drones, and new missiles, but lately the boasts are getting more grandiose to the point where many military analysts are shaking their heads.

For example, Hassan Rouhani claimed that the regime would now focus on building nuclear-powered ships even though the technology to do so is massively expensive and would require highly enriched uranium well in excess of what the country is allowed under the nuclear agreement.

Now come the latest boasts that the regime is going to build an aircraft carrier, a ship-type that even Russia and China struggle to grasp in building successfully.

“At present, the Defense Ministry and the Navy are both after building military equipment for naval warfare but the Defense Ministry is producing different types of missiles indigenously and the Navy’s needs to missiles are met using this capacity,” Deputy Navy Commander for Coordination Admiral Peiman Jafari Tehrani said on Monday, as cited by semi-official Fars news agency.

“Building an aircraft carrier is also among the goals pursued by the Navy and we hope to attain this objective,” he added.

It’s not the first time Iran has floated the idea of building aircraft carriers, since 2011 and 2014, Iranian defense officials have claimed to be moving forward with the idea even though there has been no evidence of such a building program.

Far from being able to develop advanced weapons systems, the Iranian regime is usually relegated to holding war games exercises and parades in order to beat its chest for public consumption.

For example, Iran kicked off a five-day large scale military exercise in the country’s southern region warning that civilian and military aircraft risk being shot down if they stray into Iranian airspace occupied by the drill.

The exercises, codenamed Modafe’an-e Aseman-e Velayat 7 or Defenders of Velayat Skies 7, include air defense drills and various missile, artillery and radar equipment as well as cyber and electronic warfare exercises, according to regime media.

Speaking Sunday, the commander of the regime’s air force Gen. Farzad Esmaili warned foreign aircraft trespassing the airspace covering the drill area would be shot down immediately, even though there were no foreign aircraft anywhere near the area, demonstrating the regime’s need to appear the bully.

All too often the regime’s military displays only succeed in reminding the world how grossly inadequate its military is in today’s modern battlefield. The Iranian regime excels in the kind of low-intensity, urban conflicts where proxies and terror groups can be used, but little else.

This inherent weakness in the regime’s military capability probably leads to a certain level of paranoia amongst the mullahs which is why they spend so much time, effort and energy arresting, torturing, imprisoning and executing any dissenters.

This has included mass arrests of journalists, students, artists, bloggers, social media users, fashion models and just about anyone else you can think of. It also includes a respectable number of dual-national citizens that Iran does not recognize, including Canadians, French, Brits and Americans.

The regime has expanded its efforts during this holiday season to target Christians, arresting any who preach the Gospel or attempt to convert a Muslim to Christianity. This follows the regime’s prior efforts to arrest and abuse others faiths such as Ba’hai and Kurds.

Ultimately much of the Iranian regime’s military boasting is so much hot air, but not the sincerity of the threats it makes against its neighbors. Even an old and weak animal can still cause havoc and mayhem.