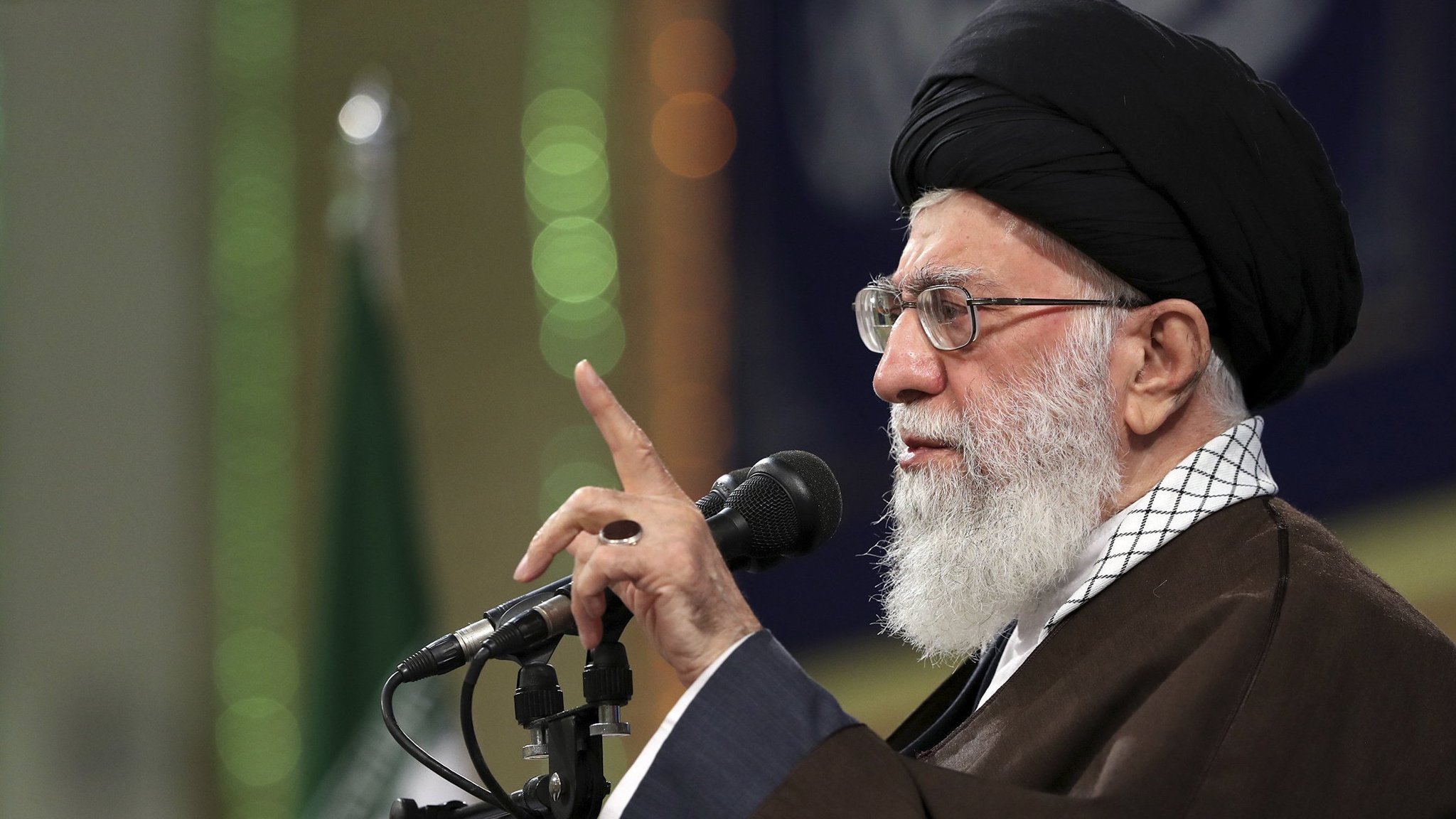 In this picture released by an official website of the office of the Iranian supreme leader, Supreme Leader Ayatollah Ali Khamenei speaks at a meeting in Tehran, Iran, Saturday, April 14, 2018. Khamenei said that the U.S.-led attack on Syria is a “crime” and said the countries behind it will gain nothing. The Iranian Foreign Ministry strongly condemned the strikes and warned of unspecified consequences. (Office of the Iranian Supreme Leader via AP)

One of the central arguments being made by the Iran lobby, especially led by the National Iranian American Council, has been that the Trump administration is hell-bent on starting a war with Iran and doing all it can to engineer one, including pulling out of the Iran nuclear deal.

In all of its recent editorials and media appearances, NIAC staff have consistently tried to argue that the Trump administration alone was responsible for any negative consequences coming out of Tehran.

One such editorial was authored by Jamal Abdi, executive director for NIAC Action and the incoming leader to replace Trita Parsi as head of the NIAC, in Defense One.

“In the lead-up to Donald Trump’s decision to unilaterally withdraw from the Iran deal, the President operated with near-impunity from Congress and the media. His nomination of Mike Pompeo, an avowed Iran hawk who worked tirelessly in Congress to undercut Obama’s diplomatic efforts and unravel the nuclear deal, met with some controversy but ultimately passed over the toothless opposition of Senate Democrats,” Abdi writes.

“Trump’s appointment of John Bolton to round out his ‘Iran war cabinet’ provoked a handful of headlines but received far less media scrutiny than even Bolton’s 2006 recess appointment to a lower position in the Bush Administration. And in the immediate aftermath of Trump’s decision, it appeared he might also bully his way past Congress, the press, and Europe to begin escalating toward military conflict,” he adds.

Abdi and the rest of the Iran lobby seem to operate under the impression that Iran’s mullahs have no free will of their own and only respond like automatons to whatever provocation President Donald Trump aims at them.

In many ways, Abdi’s argument tries to absolve Iranian regime’s leadership of any responsibility since it can operate under the excuse of being “provoked” by President Trump.

Ultimately, the responsibility for everything Iran does lies not with President Trump, or his cabinet or the European Union or even social media influencers. The mullahs are the only ones who decide what happens in the theocratic dictatorship that is Iran’s government.

This is the inconvenient truth Abdi, Parsi and the rest of the Iran lobby studiously ignore because if the world’s media did affix responsibility on the mullahs for all of Iranian regime’s actions, then all of its atrocities committed in Syria, Iraq, Afghanistan, Lebanon, Yemen and other far flung places around the world—not to mention at home against its own people—would force the regime to pay a heavy price.

The Iran lobby fights mightily to ensure the mullahs do not have to pay that price.

For the NIAC, the war narrative is an important cog in its PR machinery to deflect any attention being focused on the actions of the regime and mullahs. If blame can be affixed on the Trump administration than anything bad that happens must be the president’s fault by this perverse piece of logic.

For example, Abdi boasts of a language inserted by a group of Iran-supporting members in the House in an authorization bill to support Pentagon operations prohibiting the use of U.S. armed forces against Iran as a landmark moment in halting the Trump war train.

What Abdi hopes the American people don’t notice is that the Trump administration is not preparing for war against the Iranian regime, but instead is relying on the diplomatic strategy of applying economic pressure on the regime as it has done with North Korea.

That threat is far greater to the mullahs and the real fear of the Iran lobby since cutting off the economic lifeline to Iran can only exacerbate the pressure on the Iranian economy and further drive deeper the wedge growing between the mullahs and the elites with the common, every day, oppressed Iranian citizen.

The language Abdi puts so much stock in will not survive in the Senate and raises the larger problem looming on the horizon for the Iran lobby which is the complete lack of interest in the American people in supporting the Iran nuclear deal in upcoming midterm elections.

There is literally no Senate or House candidate on either side of the political aisle out there campaigning for reinstatement of the Iran nuclear deal.

In this area, the Iran lobby stands conspicuously alone in the U.S. which is why the Iran lobby is focusing so much of its efforts on trying to keep the European Union in the fold as witnessed with a recent open letter sent to the EU’s High Representative for Foreign Affairs and Security Policy Federica Mogherini.

“In an increasingly unstable global climate and ever-more precarious ‘age of extremes,’ it is essential that one of the great diplomatic successes of the 21st century not find itself carelessly squandered. By your own estimation, it took some 12 years for this agreement to be reached. If Europe in coordination with its Russian and Chinese partners prove unable to salvage the JCPOA, the likelihood of further instability in the region and even war increases exponentially,” the letter said, which was signed by the usual suspects of Iran lobby academics and cheerleaders including Parsi.

Typically the signers warn of “war” again but miss the essential point which is the decision of whether or not a pathway to conflict is followed lies firmly in the iron grip of the mullahs in Tehran.

Only leaders such as Ali Khamenei can decide what path the Iranian regime will take. They decided to use the financial windfall from the nuclear deal to prop up the Assad regime in Syria. They decided to build a ballistic missile program. They decided to topple the government in Yemen. They decided to deploy Revolutionary Guard Corps troops to Syria. No one made them do it and the Iran lobby has never criticized the regime for it.

The real threat of war is not in Washington but lies only in Tehran.