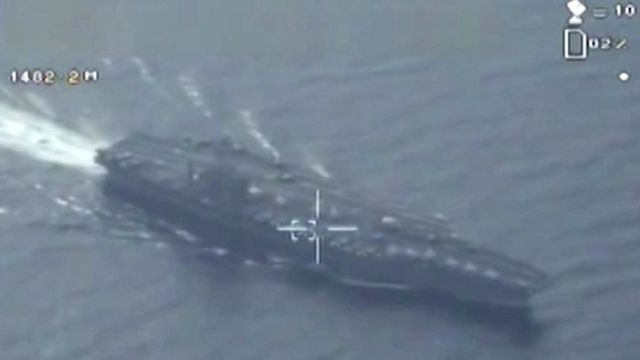 As Hassan Rouhani completed his European tour and was busy basking in the perceived glow of adulation and business deals, his boss back home, top mullah Ali Khamenei, again undermined his message by taking the opportunity to hand out medals to the regime navy commanders who captured and held ten U.S. sailors earlier this month.

Khamenei maintained that the regime needed to remain wary of its arch-enemy in the U.S. even after completion of the nuclear deal that enabled Rouhani’s trip.

“The Guards released the boats and crew, but not before deliberately embarrassing the sailors, the Navy, and the U.S. by broadcasting photos of the Americans in captivity, including the one nearby of the U.S. sailors on their knees with their hands behind their heads under armed Iranian guard,” said the Wall Street Journal in an editorial.

Secretary of State John Kerry later said he was “infuriated” by the footage of the U.S. sailors and that “I immediately contacted my counterpart. And we indicated our disgust,” the Journal added. “Apparently that disgust didn’t register with the people who really run Iran—that is, the Revolutionary Guards and the Ayatollah, who has now slapped the U.S. again by awarding medals to those who humiliated our sailors.”

The regime’s actions since completion of the nuclear deal have left little doubt as to what the true intentions are of the mullahs in charge; choosing to respond to new sanctions for example levied in the wake of the testing of illegal ballistic missiles by vowing to redouble its missile development efforts.

“They [the U.S.] keep raising the issue of sanctions against Iran over its missile program and they expect us to retreat,” warned Hajizadeh, “Far from it, the IRGC response to the US demands will be offensive. As explicitly stated before, the Islamic Republic of Iran will respond to the [U.S.] propaganda and annoying move by further pursuing its completely legal missile program. Iran will strengthen national defense and security capabilities.”

Iran’s missile program is controlled by the IRGC, which takes orders directly from Iranian regime’s supreme leader, Khameini. Iran’s president Rouhani has essentially no control over the organization, which has been actively undermining Rouhani since his election, according to the Daily Caller.

That aggressive militant stance was reinforced on Sunday by regime saying it still wanted to promote a self-reliant economy even though the sanctions against it have been lifted and its doors are now open to foreign investors.

The regime’s minister of industry, mines and trade Mohammad-Reza Nematzadeh in a letter to Khamenei emphasized that the removal of the sanctions have created no change in plans to strengthen domestic industries and enhance their technical capabilities.

Nematzadeh added that his ministry will continue to consider the guidelines put forward by Khamenei to move toward the establishment of the resistance economy, which promises to emphasis industrial sectors controlled by the Revolutionary Guard and at the expense of consumer growth that might alleviate the economic suffering of the Iranian people.

In another show of escalating tensions with the U.S., the regime media released a video purportedly showing a drone flying over a U.S. aircraft carrier. The video shows a ship covered in fighter jets steaming through the blue seas. Cmdr. William Marks, a U.S. Navy spokesman, said in a statement that he could not confirm the authenticity of the video, but he added that an Iranian drone was spotted flying around the French carrier Charles de Gaulle and the American carrier USS Harry S. Truman on Jan. 12 in the Persian Gulf. The drone was unarmed and determined not to be a threat, but Marks said the incident is still considered “abnormal and unprofessional.”

That incident occurred on the same day the regime’s navy detained the U.S. sailors for which Khamenei handed out his medals.

With the emphasis on renewed aggressive acts and a commitment to a resistance economy, the political situation domestically within the regime grew more precarious for dissidents and any moderates opposing the regime’s mullahs.

“Next month’s elections in Iran do not bode well for Iranians eager for more political and social freedoms or for the promising new relationship with the West symbolized by the recent deal limiting Iran’s nuclear program,” said the New York Times in an editorial that almost sounded like a mea culpa in supporting the nuclear deal in the hopes of a more moderate Iranian regime.

“The hard-liners are in a good position to prevail in the Feb. 26 polls because of political manipulation and a nominating process that gives a small group of people enormous power over who can and cannot run,” the Times wrote. “In a sign of heightened interest in electoral politics, some 12,000 Iranians registered to run in the election for Parliament, more than double the 5,405 who registered in 2012. Yet, more than 7,000 of those would-be candidates were disqualified by the Council of Guardians, a 12-member group appointed partly by the supreme leader and partly by the judiciary.”

Rouhani, who won election in 2013, has yet to deliver on campaign pledges to restore basic freedoms, including free speech and the release of political prisoners. Hundreds of political activists and journalists remain in prison, according to various Human Rights organizations; “Iran is a leading executioner of prisoners, including juveniles,” noted the Times of the worsening situation within Iran. Not to mention that under Rouhani well over 2000 people have been executed in Iran, including at least 63 women, and at least 73 people who were under the age of 18 when committed the alleged crime.

We can only hope that more people who bought into the promises of the Iran lobby about a new moderate Iran will now realize the folly of that hope as the regime tries to cash in on the deal.