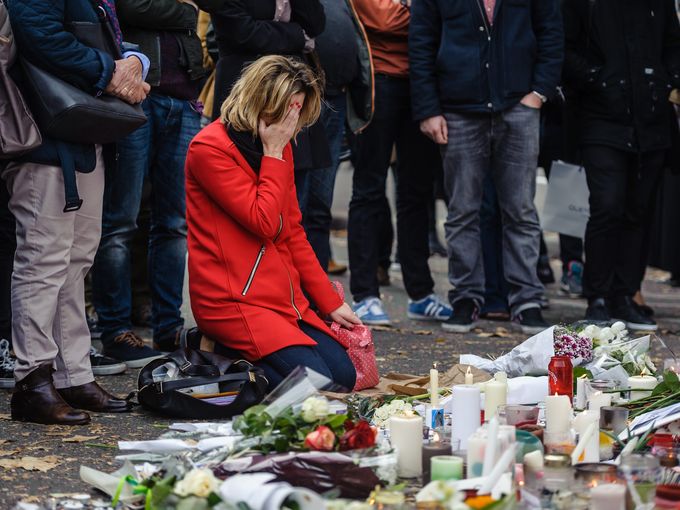 The contrasts in image and tone could not be more striking. On the streets of Paris, thousands gather to mourn those killed in ISIS terror attacks that shook Europe, while on the streets of Tehran, agents for the Revolutionary Guard are busy rounding up more journalists and dissidents in one of the fiercest crackdowns since the days of Mahmoud Ahmadinejad’s reign.

The latest victim of the Iran regime’s security crackdown was the arrest of a press cartoonist who was taken into custody while at work at The Shahrvand, a state daily newspaper in Tehran that is owned by Iran’s Red Crescent Society, or Red Cross according to New York Times.

The arrest had not been reported in the official news media as of Monday night. It came after the publication of a cartoon depicting tearful solidarity with the people of France over the attacks Friday that left at least 129 people dead. The cartoon was also posted on the Instagram.

The fact that a cartoonist is arrested by the regime for publishing a cartoon expressing sympathy for those slain by ISIS – the putative enemy of the Iranian regime – tells us all we need to know about what the mullahs in Tehran are thinking about the slaughter of French, German, American, British, Spanish and Swedish citizens.

The cartoonist’s arrest follows a nationwide crackdown in which several journalists and even two poets have been arrested as being subversive to the regime and serving as tools for Western influence as the regime seeks to stifle any voice of dissent in the wake of the nuclear deal it agreed to last July.

The “to-do” list for the mullahs have been busy lately as they have sought to win the civil war in Syria and secure the Assad regime, gone on a shopping spree for new weapon systems from the Russians, and send proxies to attack an Iranian dissident camp in Iraq in a brutal rocket barrage.

The mullahs have even instituted a new policy to impound the cars of any Iranian women caught driving a car without wearing a “proper” hijab or head covering. This follows past policies that forbade Iranian women from driving alone and allowed basij paramilitaries to beat women drivers and failed to prosecute others who threw acid at women while driving.

Senior mullahs have in recent weeks intensified their verbal attacks on “bad-hijab” women in Iran, with one likening them to “soliciting for sex.”

“The courageous decision by the commander of our police force to confront those women who defy and remove their hijab behind the wheel must be appreciated as it amounts to fighting prostitution on our streets,” said a mullah named Ahmed Alam Ulhoda in one of the more absurd comments ever published.

Another series of arrests targeted social media apps as the Revolutionary Guard also went after administrators on the popular Telegram messaging app for spreading “immoral content” according to the regime’s Fars news agency.

Telegram’s Chief Executive Pavel Durov said last month that Iranian regime authorities had demanded he hand over “spying and censorship tools”, and temporarily blocked the app when he refused.

The IRGC announced the Telegram users’ arrests last week, saying they had shared images and text “insulting to Iranian officials” as well as “satire and sexual advice”. At the time, the judiciary denied any such arrests had even occurred.

The crackdowns, especially the widespread nature and swiftness in their enforcement, underscore just how farcical the myth was that Hassan Rouhani’s elevation to president would represent some new “moderate” breakthrough for the regime. Indeed the violations of human rights in Iran has got worse during his tenure.

The alarming rise in human rights abuses moved Human Rights Watch to issue a joint letter signed by 36 human rights groups and other organizations urging support for United Nations General Assembly Resolution A/C.3/70/L.45 which seeks to promote human rights in Iran by calling on the regime to meet its domestic and international obligations to protect human rights.

The vote is scheduled on November 19, 2015 during the 70th session of the General Assembly.

“The Iranian authorities shouldn’t think they are getting a pass on human rights just because the nuclear accord has been signed,” said Sarah Leah Whitson, Human Rights Watch Middle East director. “Passing this resolution will send the message that the world has not forgotten about the country’s ongoing human rights abuses.”

More importantly, supporters of the regime have uttered not a word of criticism over the recent crackdowns. Groups such as the National Iranian American Council and The Ploughshares Fund and bloggers and commentators such as Jim Lobe and Ali Gharib have shifted their focus not on the tragedy suffered by the people of France, but rather in attempting to link the attacks and ISIS to Saudi Arabia in an effort to attack the Iran regime’s long-time rival.

Trita Parsi, head of the NIAC, has been busy on his social media feeds denouncing Saudi Arabia during the Paris attacks as much as he was busy denouncing Israel during the nuclear talks. In both cases, the real goal of his comments is to shift attention away from the bad acts of the Iranian regime.

Ultimately, the world is beginning to see past the facades put up by Iran lobby supporters and are recognizing that the true center of sectarian hate sits squarely in Tehran.