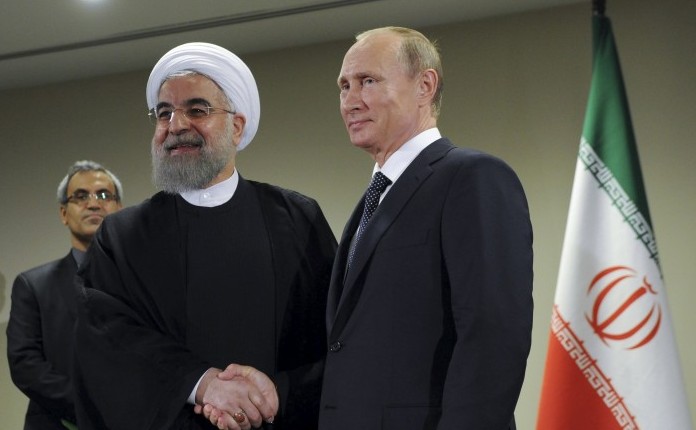 Russia’s President Vladimir Putin (R) meets with Iran’s President Hassan Rouhani on the sidelines of the United Nations General Assembly in New York, September 28, 2015. REUTERS/Mikhail Klimentyev/RIA Novosti/Kremlin ATTENTION EDITORS – THIS IMAGE HAS BEEN SUPPLIED BY A THIRD PARTY. IT IS DISTRIBUTED, EXACTLY AS RECEIVED BY REUTERS, AS A SERVICE TO CLIENTS. TPX IMAGES OF THE DAY

If Alice could fall through the Looking Glass and stumble into our world today, she would no doubt find it stranger than her own Wonderland. She could have watched Russian president Vladimir Putin’s address to the United Nations General Assembly where he proposed a new alignment of nations to fight terrorism which coincidentally includes state sponsors of terrorism such as Syria and the Iran regime.

Putin’s address, along with the speech given by Hassan Rouhani, Iran’s handpicked façade of moderation, reinforces the efforts to craft a new world order built on the foundations of regimes intent on using proxies, military force, kidnappings, executions and mass arrests to achieve its geopolitical gains.

The fact that Russia has openly and rapidly built up a military presence in Syria, has begun shipping advanced weaponry to Iran and agreed to share intelligence amongst Syria and the Iran regime should send shockwaves through the rest of the world at how rapidly we are witnessing the aftermaths of a bad nuclear deal.

According to the Daily Beast, Putin even hinted darkly that ISIS was a Western invention designed to weaken or overthrow “secular” autocratic regimes. In reality, his client Bashar al-Assad spent a decade underwriting al-Qaeda in Iraq, the predecessor of ISIS, including by dispatching into Iraq foreign jihadists freshly arrived in Damascus for the purpose of blowing up U.S. coalition and Iraqi forces.

Now add to this Putin’s fondness for Iran, the Iranian-controlled paramilitary Hezbollah, and the Iranian-influenced government of Iraq, all of which Russia is now sharing intelligence with and, in the case of the first two, coordinating joint military operations with in northern Syria, according to recent press reports. In other words, two of the world’s leading state sponsors of terrorism, and an actual terrorist organization, are what Putin is presenting to the West as its single best and last hope for combating terrorism, said James Miller in his Daily Beast piece.

This new “Axis of Terror” is going to be flush with $150 billion in cash as a result of the nuclear deal, while at the same time U.S. military power is undergoing a historic reduction and retrenchment; withdrawing from vast parts of the Middle East and Africa and leaving a power vacuum that extremist states such as Iran are rushing to fill.

Part of that expansion came in Rouhani’s media appearances and speech in which he stated that Assad’s removal was a virtual red line and he met with Afghanistan’s chief executive officer, Abdullah Abdullah, in which Rouhani emphasized the regime’s interest in Afghanistan and the need to consolidate security in Afghanistan; using language strikingly similar to that used before Iran flooded Iraq with Shiite militias.

That perception of returning to the international stage for Iran wasn’t limited to just military matters as European nations such as Italy began the dance of gearing up to take advantage of the opening of Iranian markets and oil industry as Rouhani met with Italian Prime Minister Matteo Renzi to discuss potential contracts for Italian firms.

But the plight of the oppressed in Iran continues to stand out in stark relief to the smiling image Rouhani and his lobbying allies such as Trita Parsi of the National Iranian American Council have sought to portray.

Ramin Ahmadi, writing in Quartz, detailed the descent human rights have made under Rouhani’s tenure as the regime has cracked down and becoming even more brutal than under the regime of Ahmadinejad which defies logic.

“Even a cursory look at the facts on the ground demonstrates that fundamental rights in Iran have deteriorated on his watch. Executions have jumped dramatically, including for juveniles and those convicted of less serious crimes, such as drug possession. Women have been the victims of a wave of acid attacks, to which lawmakers responded with a bill that would further empower officials to police Islamic dress,” Ahmadi said.

“The government continues to jail journalists, among them Washington Post reporter Jason Rezaian. And ethnic and religious minorities have faced increased persecution. In March of this year, Iran again went before the UN Human Rights Council, where Ahmed Shaheed, the Special Rapporteur on Iran, noted that conditions in Iran are deteriorating, despite Rouhani’s pledges to make improvements,” he added.

The ongoing brutality in Iran should come as no surprise as the regime’s mullahs and leadership are lock-step in sync in supporting an agenda of extremist Islam married to harsh defiance to the rest of the world. Even a handshake between President Obama and regime foreign minister Javad Zarif has become fodder for regime leaders who oppose any appearance of accommodating the West as decreed by top mullah Ali Khamenei.

But even as Alice might shake her head at the unfolding events happening now, she would have found the most recent media reports that the Iran regime’s women’s soccer team is not really made up of females, the absurdity of the regime putting men forward as women demonstrates how the Iran regime lives in its own fantasy land that even Alice would not believe.