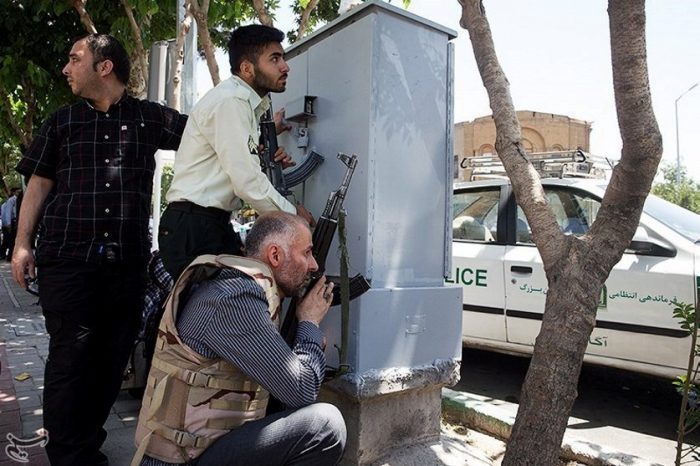 Members of Iranian forces take cover during an attack on the Iranian parliament in central Tehran, Iran, June 7, 2017. Tasnim News Agency/Handout via REUTERS

The Iranian regime pushed out an absurd theory over the weekend blaming the U.S. for the birth and growth of ISIS and continues to push the inane message even though virtually every intelligence and news report refutes the notion.

Of course, the reason the mullahs are pursuing this silly argument is simple: They must blame the recent ISIS attacks in Tehran on someone else otherwise they will face the uncomfortable truth that the terror they have wrought on the rest of the world is finally coming home.

Armstrong Williams, an advisor and spokesman for the presidential campaign of Dr. Ben Carson and a radio host, took that notion to task in a piece in the Hill.

While he correctly sympathizes with the victims killed and wounded in the ISIS attacks, Williams points out that the attacks were less about raining death and destruction on the Iranian regime, as much as making a propaganda point against the mullahs.

“It is also important to recognize the significant role that symbolism plays in both Iranian and Middle Eastern cultures. Which is why the second terrorist attack targeting Ayatollah Ruhollah Khomeini’s tomb complex, the leader of Iran’s Islamic revolution, was a veritable attack at Iran’s core,” he writes.

“These twin terror attacks, striking the mullahs’ parliament and shrine to the Khomeini, represent a very painful bitter pill for the Iranian regime to swallow.”

It’s a harsh wake-up call to the mullahs who have consistently used terror and proxies such as Hezbollah and Shiite militias to wage war on their enemies to see the same thing happen right in their backyard.

“ISIS, the Taliban and al Qaeda have also received support from the extremist Iranian mullahs, which is ironic since each of these terrorist groups’ ideologies are determined to eradicate Shi’ism, which just happens to be the religious backbone of the Iranian regime,” Williams said.

“And the reason for this twisted terrorist support is sickening: Tehran sees benefit in forming tactical alliances with these terrorist entities because they too loath America, and are motivated by a virulent anti-West agenda.”

Many news media and even the Iran lobby often try to portray the combatants in Syria as split on sectarian lines; Sunni vs. Shia with Iran firmly and bravely fighting ISIS, but in truth, Iran sees and has used ISIS as an effective foil for the West, diverting attention from its own actions in Yemen, Iraq and the Persian Gulf.

In fact, the Iranian regime could not have it both ways anymore. It could not—on the one hand—sponsor and export terror and not expect to that to rebound on them down the road. It’s the ultimate act of hubris on the scale of a Greek tragedy.

Amir Basiri, a contributor to the Washington Examiner’s Beltway column, explained how the Iranian regime and ISIS both benefitted from each other.

“The Islamic State clearly owes its rise to Tehran. The violence caused by Iran’s Revolutionary Guards and its affiliates in Iraq and Syria created the perfect breeding ground for the emergence of the Islamic State and allowed it to occupy large swathes of land in both countries,” he writes.

“Reciprocally, the Islamic State returned the favor, causing rampage that provided Iran with the perfect excuse to increase its meddling in neighboring countries. Under the pretext of fighting the Islamic State, Tehran founded and legalized the Popular Mobilization Forces, an umbrella for extremist Shiite groups backed by Iran. The Islamic State also became Iran’s excuse to openly intervene in the Syrian conflict and shore up the Assad regime against opposition forces,” he added.

That recognition by both sides is what has allowed both to flourish as Iran expanded its control over Syria, Iraq and Yemen, while ISIS grew from a small collection of jihadi fighters to a vast terror-nation state with access to cash reserves, oil exports and a tax system.

Only when ISIS began to suffer losses on the battlefield and engaged in inspiring terror attacks worldwide over the past two years have nations finally coalesced in trying to exterminate the group.

The problem for the mullahs in Tehran is what happens if ISIS is eventually eradicated? The excuse they have used for so long in justifying their presence in Syria and Iraq will evaporate, which is why they are now trying to tie ISIS to the U.S. and long-time foe Saudi Arabia.

Only by framing the two as ISIS god parents can Iran hope to legitimize its continued occupation of its holdings.

“This is a reminder that Iran is not part of the solution in fighting the Islamic State or other extremist groups. Islamic fundamentalism can only be eradicated if it is fought in its entirety. This will require the eviction of the Iranian regime and the Revolutionary Guards from the region and the total dismantling of its terrorist proxies,” Basiri adds.

The Iranian regime is already working hard to beat the clock and solidify its foothold with the announcement of the appointment of a new Iranian ambassador to Iraq, not from the diplomatic corps, but from its Quds Forces.

Iran’s most prominent economic daily describes the arrival of Iraj Masjedi in Baghdad to take over Iran’s embassy there. Masjedi is a brigadier-general in the Quds Force who served in several leadership roles in forward operating bases during the Iran-Iraq War.

In recent years, the Iranian press has described him as a senior advisor to Quds Force leader Qassem Soleimani. His promotion to be Iranian ambassador to Iraq suggests that Tehran’s focus in Iraq in the coming years will be military.

That suspicion was amplified with news reports that a blast that killed three people and injured 15 others on Friday in the Iraqi city of Karbala had an Iranian link.

“After the explosion and during the investigation and inspection on Friday night, the Iraqi intelligence forces arrested five Iranians who had explosives and remote control devices at the area near the blast site, in the eastern Abbasid,” an official said on condition of anonymity.

“The security forces transferred the Iranian detainees to the Karbala intelligence headquarters for interrogation,” the source said. “But minutes later dozens of Brigade Ali Akbar and Badr Organization militias supported by Iran surrounded the headquarters of the intelligence of Karbala.”

The source said the militias demanded the release of the five Iranian detainees but their request was rejected by the head of intelligence, who emphasized that he will hand them back only to authorities in Baghdad.

The strong-arm tactics are nothing new to Iranian-backed militias and heralds a disturbing new chapter in Iran’s involvement in Iraq.

We can only hope that the Quds Forces do not turn Iraq into another Syria in order to find a new distraction for the world.