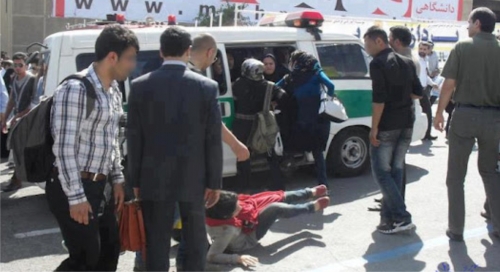 Archive-Iran Regime Does Away With Moderate Façade

The old adage goes “judge me by my deeds, not my words.” It’s appropriate to apply it to the Iranian regime when weighing how to react to the Islamic state. In the case of the new Trump administration, it is becoming increasingly easy to figure out what is motivating the mullahs in Tehran.

The Iran lobby, most notably the National Iranian American Council, has always made the argument to ignore the rhetoric and judge Iran by its people and the “moderates” struggling to gain control of the government.

Notable Iran lobby advocates such as NIAC’s Trita Parsi have literally yelled from the rooftops that Iran was not really interested in confrontations with the U.S. and only wanted a new friendly relationship. It was this slippery slope the Obama administration fell down in acquiescing broadly to the demands of the mullahs in crafting a nuclear deal separate and apart from placing conditions on things such as support for terrorism and abusive human rights.

Unfortunately, virtually none of those promises have come to pass and in the face of a Trump administration that has opted for an aggressive posture towards Iran with newly announced sanctions and the appointment of several vocal regime critics in key cabinet positions, the mullahs seem to have finally decided to drop the charade and stop trying to portray themselves as moderates.

The latest evidence of that came in the form of a full-length animated film depicting an armed confrontation between Iran’s Revolutionary Guards and the U.S. Navy soon to open in Iranian cinemas.

According to Reuters, the director of the “Battle of Persian Gulf II”, Farhad Azima, said that it was a remarkable coincidence that the release of the film – four years in the making – coincided with a “warmongering” president sitting in the White House.

“I hope that the film shows Trump how American soldiers will face a humiliating defeat if they attack Iran,” Azima told Reuters in a telephone interview from the city of Mashhad in eastern Iran.

The 88-minute animation opens with the U.S. Army attacking an Iranian nuclear reactor, and the U.S. Navy in the Gulf hitting strategic locations across the county.

In the film, the IRGC retaliates by raining its ballistic missiles on U.S. warships.

“They all sink and the film ends as the American ships have turned into an aquarium for fishes at the bottom of the sea,” Azima said.

The main Iranian commander in the film has been intentionally depicted as Qassem Soleimani, the notorious IRGC commander who is overseeing Iran’s military operations in Syria and Iraq against Islamist militants and was designated a supporter of terrorism by the U.S. for his role in coordinating the manufacture and delivery of IEDs to Iranian-controlled Shiite militias in Iraq targeting U.S. personnel.

Soleimani was reportedly seen arriving in Moscow earlier this week in violation of sanctions restricting his travel. He has been to Moscow several times ignoring his travels bans on Iranian airlines to discuss military operations in Syria with Russian officials. His direct pleas have been widely regarded as key to persuading Russia to enter the conflict in order to save the faltering Assad regime.

This is Soleimani’s third trip to Moscow following visits in April and July 2015. Soleimani is thought to be the mastermind behind Iran’s proxy war in Syria in order to prop up the Assad regime. Soleimani met with Russian President Vladimir Putin and Russian Defense Minister Sergei Shoigu days after the Iranian nuclear deal was agreed to in Vienna.

According to Fox News, Soleimani was in Moscow to register the mullahs’ displeasure with Russia’s relationship with Iran’s regional foes, specifically the sale of Russian military equipment to Saudi Arabia and other Arab states.

Lest we forget, the Iranian regime has steadily increased the tempo of bell`igerent actions since the nuclear deal, including the detention and parade of American sailors, widening of the wars in Iraq, Syria and Yemen, and a steady stream of propaganda efforts including the routine “Death to America” depictions as well as the launching of increasingly more powerful ballistic missiles.

The latest disclosures of the IRGC’s operation of a vast network of training camps for its own and foreign fighters to be deployed in conflicts abroad by a network of Iranian dissident groups only solidifies the argument that the Iranian regime is done with the pretense of trying to be a more moderate nation.

The dissident groups, led by the National Council of Resistance of Iran, have issued calls for the IRGC to be designated a Foreign Terrorist Organization as a whole.

Iran already is part of the U.S. State Department’s State Sponsors of Terrorism list, along with Syria and Sudan. However, new calls are coming from leading critics of the regime to designate the IRGC as a foreign terrorist organization – and the Trump administration is said to be considering that.

“The people of Iran would welcome the designation of the IRGC, which is responsible for thousands of political executions and tortures in prison. It is also responsible for training terrorists supporting and engaging in terrorist activities outside Iran,” said Maryam Rajavi, the leader of the NCRI, which is the largest Iranian opposition group.

“I believe the time has come for a firm policy on Iran. The failed policy of appeasement has hurt the Iranian people, as well as global peace and security,” she said.

To emphasize the suffering of the Iranian people under the mullahs’ medieval rule, news reports came out of a 14-year old girl suffering a savage beating by the regime’s morality police for wearing ripped jeans.

Zahra*, who The Independent is not identifying for fear she may suffer reprisals, was celebrating her birthday with friends last week when a patrol of “morality police” pulled up.

The teenager said officers tried to force her and her friends into their car in the city of Shiraz, beating them when they resisted.

“There were two women and two men in a huge van and they pushed us into it with the force of their beatings,” she recalled. “Their objection was to the ripped jeans that we were wearing. There were really no other issues concerning my friends and I.”

“I still carry the bruises sustained from their beatings on my face,” she said. “I still feel their pressure on my arm and my ribs still hurt.”

In an exclusive interview with The Independent, her mother described the ordeal as “the worst day of my life, as if the world has ended for me”.

Rules are enforced by thousands of visible and undercover religious or “morality” police, who patrol the streets to check for violations.

Women found to have their hair or bodies inadequately covered can be publicly admonished, warned, fined or even arrested, while vigilantes are also active.

This is why any discussion of a moderate Iran under its current leadership is simply another case of “fake news.”