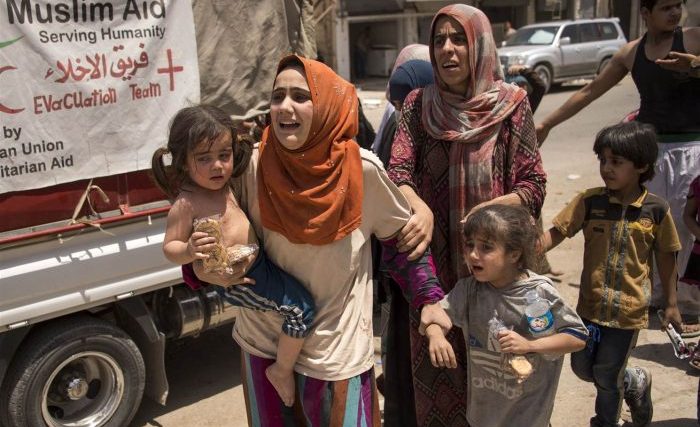 The mullahs in Tehran have never made a secret of their lust for controlling the Middle East, especially the countries surrounding Iran. Part of the reasoning has been to create a buffer protecting the Islamic state from its perceived enemies, including regional rival Saudi Arabia, but it also was designed to provide the mullahs with a steady supply of proxies that could be used as cannon fodder for conflicts.

The Iranian regime, through its Revolutionary Guard Corps and its Quds Forces, have historically relied on third parties to do its dirty work be it Hezbollah in Lebanon, Shiite militias in Iraq, Houthi rebels in Yemen or Afghan mercenaries in Syria.

The willingness of the Iranian regime to use these proxies demonstrates its callous disregard for human life and take no prisoners attitude in achieving its goals. It also ably demonstrates why any agreement reached with the mullahs is essentially worthless since they will always seek to circumvent any accord should it suit their purposes.

Which is why any effort to resolve the civil war in Syria must first and foremost force the expulsion of Iranian forces from that war-torn country. Similarly, as ISIS is defeated in Iraq with the liberation of Mosul, a similar kicking out of Iranian forces would be a positive first step to returning that beleaguered country to normality.

None of this will be easy though since the mullahs are loath to give up their hard-fought gains in securing a so-called “land bridge” linking Tehran to Damascus through Baghdad, which fulfills the long sought-after vision of Shia control from the Mediterranean to the Indian Ocean.

The strategic vision of the Iranian regime includes the establishment of permanent naval bases along the Syrian and Yemen coastlines, giving its navy unfettered access to the crowded international shipping lanes in the Mediterranean and through the Persian Gulf and Suze Canal.

The mullahs see themselves being able to keep a loaded pistol pointed at the economic lifeblood of Europe through its use of its military and navy. It also explains why Iran has invested so heavily and fought hard to protect its ballistic missile program from the threat of economic sanctions.

Just as the control of territory and sea lanes are crucial to the mullahs’ vision of maintaining control, its ballistic missile fleet is the hammer necessary to enforce that control by placing Eastern Europe, North Africa and Southeast Asia under threat of attack.

The firing of ballistic missiles for the first time at purported ISIS targets in Syria was less about actually striking at ISIS forces, as much as it was a practical demonstration and testing of its missiles by Iran.

In many ways, the opening salvos are eerily similar to Nazi Germany’s involvement in the Spanish Civil War in 1936, not to support the rule of General Francisco Franco in as much the ability to test new German tactics and weapons that would later be employed in the blitzkrieg of World War II.

The civil war was also notable for the bombing of Guernica in 1937 in which Germany tested out new warplanes in killing hundreds of civilians; a prelude to the mass slaughters to follow. Famed artist Pablo Picasso immortalized the attack with his eponymous painting, but if he were alive today, he could have painted similar works memorializing places such as Mosul, Raqqa or Ramadi where Iranian-backed forces have left swathes of destruction that made Guernica look paltry by comparison.

But all of these efforts by the Iranian regime to exert its control over its neighbors may have finally forced pushback among many of these former perceived allies of Iran.

In Pakistan, tensions have sharply escalated with a serious of border conflicts that got another dose of violence in the form of rocket attacks by Iranian border guards aimed at Pakistan.

“The incident took place in the wee hours of Saturday,” Panjgur’s Deputy Commissioner Jabbar Baloch told The Nation. He confirmed no loss of life or property was caused by the Iranian shelling. The rockets exploded with powerful bang after landing in the area, prompting fear and panic among the residents.

The adjacent areas of Panjgur and Chagai close to Pak-Iran border have repeatedly witnessed rocket shells fired by the Iranian security forces followed by strong protest from the Pakistani side. The regular violation of Pakistani territory by Iranian guards and allegations of cross-border infiltration by Pakistani side has strained ties between the two neighboring countries which share a 900-km long porous border.

This was followed by news from Iraq of threats being made by one of the largest tribes in Karbala against Iranian forces after one of its prominent leaders,  Sheikh Nema Hadi al-Issawi, was killed in the Iranian city of Mashhad.

In order to calm the tribe, Hadi al-Amiri, the leader of Al- Badr militia and who is close to the Iranian regime and the commander of Al- Quds Force, asked to attend the funeral of the killed Sheikh but the al-Issa tribe refused the request and prevented Amiri from entering its houses in Karbala, according to Al-Arabiya.

This comes after massed protests in southern Afghanistan by locals denouncing Iranian regime president Hassan Rouhani over disparaging comments he made in criticizing Afghan water management and dam projects, according to the Voice of America.

Hundreds of demonstrators peacefully marched through the streets of Lashkargah, capital of Helmand province near the Iranian border. They chanted, “Death to Hassan Rouhani” and “Death to enemies of Afghanistan.”

These actions don’t even include the active losses being suffered by Iranian-backed forces in Syria and Yemen at the hands of U.S. and Saudi-backed forces.

All of which points to a turning of fortune for the mullahs that may see their hopes for a Shiite sphere of influence go up like puffs of smoke.