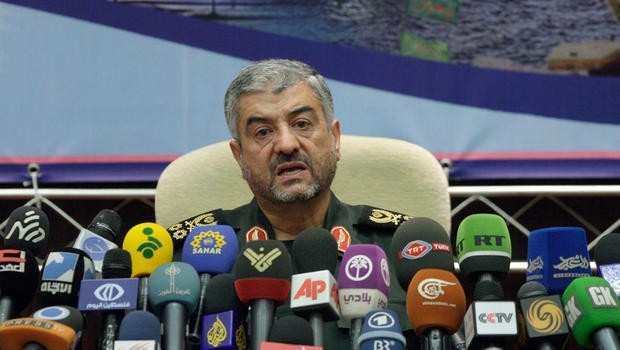 Who knew the American flag could be a “Satanic symbol” but in Tehran under the mullahs, it not only is, but along with the Union Jack, is a forbidden item for sale on T-shirts in the Islamic state as the religious theocracy cracks down on merchants looking to cash in on the perceived thawing in relations with the West.

“This morning we took these clothes off leading distributors,” said city police chief General Hossein Sajedinia as quoted by the ISNA news agency.

Sajedinia said reports about the activity had been received in the past two weeks, leading to surveillance and detentions and the closing of any stores selling such items.

So much for the “moderate” Iran government.

The disconnect between the perception being pushed by regime advocates such as the National Iranian American Council and apologists such as Ali Gharib and Paul Pillar of a cuddly and soft new Iranian government and the real on-the-ground truth of a brutal, harsh and unrelenting regime is stark and incontestable.

Since the July 14 agreement between the Iran regime and the P5+1 group of nations, the regime has done little to reassure the rest of the world that it has indeed changed. In fact, its actions since then have only reinforced critics of the regime who have long maintained that Iran’s mullahs have absolutely no intention of changing course.

The biggest concession the regime won from the rest of the world was not allowing it to keep the bulk of its nuclear infrastructure intact, nor was it the lifting of trade and financial embargoes allowing it to access $150 billion in frozen assets or sell four million barrels of oil on the open market or buy advanced military weapons systems again.

No, the biggest concession was uncoupling the actions of the regime from any future repercussions. In effect, the cutting of Iran’s conduct from any measurable yardstick of internationally accepted normative behavior from any consequences from future sanction or action has emboldened Iran’s mullahs to feel invigorated with their new-found freedom and they have left the starting gate running harder and faster than Triple Crown winner American Pharoah.

NPR correspondent Michele Kelemen focused on this disconnect in examining the Iran regime’s steadfast refusal to answer questions from the International Atomic Energy Agency over the past decade over the military dimensions of its nuclear program.

Harvard University’s Olli Heinonin, a former top official at the International Atomic Energy Agency, says having full knowledge about the past will be crucial in the future — when Iran gets out from under the current limits on its nuclear program,” Kelemen said.

“You want to understand how far did they get,” said Heinonin. “Then you know what else they need to do to manufacture a nuclear weapon.”

Heinonin, speaking at the Foundation for the Defense of Democracies, which has been critical of the Iran deal, said knowing about the past will also help inspectors know where they should concentrate their efforts now, according to Kelemen.

That defiance of in adhering to the proposed agreement was again reinforced by Iranian Defense Minister Hossein Dehghan who recently reaffirmed Iran’s position that issues involving Iran’s missile program are not matters for discussion. Presumably, Iran is determined to keep developing its missile force.

As for attempts to clarify Iran’s past activity regarding the “military dimensions” of its nuclear program, Dehghan noted that Iran will definitely not grant anyone access to its security and military “secrets.”

He was echoed by the head of the regime’s Revolutionary Guard who said the U.S. is still the “Great Satan,” regardless of the nuclear deal struck with the Americans and other world powers over the Islamic state’s contested nuclear program.

The comments by Gen. Mohammad Ali Jafari, reported by the official Guard website, said enmity against Iran by the U.S. hasn’t lessened.

“We should not be deceived by the U.S.,” Mr. Jafari reportedly said. “It wants to infiltrate into Iran, resorting to new instruments and method.”

But rhetoric alone is not the only tool the Iran regime is using as Kuwait yesterday charged 24 people suspected of links to Iran and the Hezbollah terror group with plotting attacks against the Gulf state according to a public prosecutor.

The men were charged with “spying for the Islamic republic of Iran and Hezbollah to carry out aggressive acts against the State of Kuwait” by smuggling in and assembling explosives, as well as possessing firearms and ammunition, the statement said.

They were also charged with “carrying out acts that would undermine the unity and territorial integrity” of Kuwait, and of possessing eavesdropping devices, it said.

The actions in Kuwait only serve to underscore the mistake by the P5+1 in giving Iran this major act of appeasement in the hopes of buying some short term security by forgoing any hope of containing the Iran regime in the future. It’s a Faustian bargain that Stephen Rademaker explained on PBS this weekend:

“Faust was this mythological figure who sold his soul for the — to the devil in exchange for magical powers for — I think it was 26 years,” he said.

“For 26 years, he had magical powers. At the end of 26 years, the devil came to claim his soul. And I think that is a pretty good analogy to what this deal provides. For 10 years, it’s not a bad deal. After 10 years, it becomes a horrible deal and it gives Iran regime everything they have always wanted. After — President Obama concedes, after 13 years, the breakout time is almost zero,” he added.

Rademaker was an assistant secretary of state for the Bureaus of Arms Control and International Security and Nonproliferation under President George W. Bush. He’s now a principal at the Podesta Group in Washington and an adviser to the Bipartisan Policy Center.

All of which demonstrates as clear as daylight that the Iran regime is fully committed to its extremist course of action and the proposed deal, far from hindering it, actually enables it.

All of which demonstrates as clear as daylight that the Iran regime is fully committed to its extremist course of action and the proposed deal, far from hindering it, actually enables it.