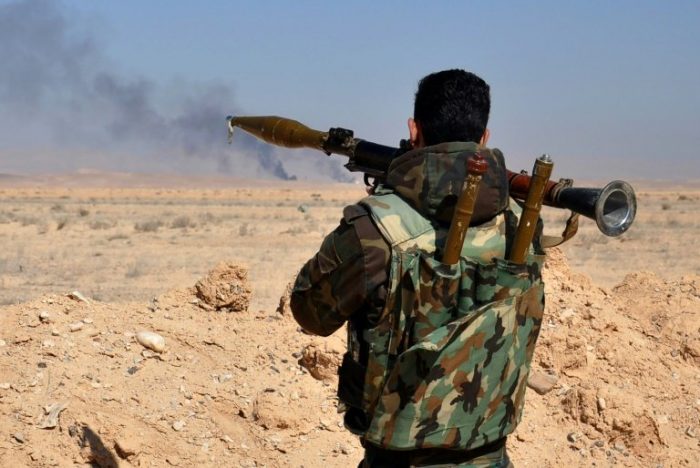 With Hassan Rouhani ensconced for another four years, the mullahs in Tehran can turn their attention back to the work at hand which is continuing the expansion of the Iranian regime’s extremism and secure the gains it made during four years of an Obama administration’s failed policy of appeasement.

That expansion is on a variety of fronts. First and foremost, the regime is focused on expanding its military capabilities and has made aggressive moves to do so. It’s a vital step for the regime since the Revolutionary Guard Corps and its related units, such as the Quds Force, are the tip of the spear that also happen to control the economic purse strings of the country.

Through an elaborate network of shell companies, the IRGC control most of the major industrial sectors such as oil, manufacturing, telecommunications and financial services. It regularly uses the profits from these enterprises to pay for its military expenditures as well as the proxies it uses in its fighting.

The IRGC also pushed hard for the nuclear deal for one specific purpose which was to lift crippling economic sanctions that were cutting off its supplies of cash and arms. That was vital since the handwriting was on the wall since the Arab Spring democracy protests and the disputed Iranian presidential election of 2009 that the regime was under significant pressure that threatened the rule of the mullahs.

The flawed nuclear offered unjustified concessions for the regime not only because it lifted sanctions and flooded cash back into the mullahs’ coffers, but also it allowed the regime to unlink its abysmal human rights record and support for terrorism from the agreement itself.

This essentially gave the regime a blank check to continue to engage in militant actions without fear of reprisal.

Part of that military support has been a destructive expansion on Iran’s use of proxies such as the terrorist group Hezbollah to fight its battles, especially in the ever-widening Syrian civil war and the insurgency in Yemen with the Houthi.

News reports have pointed towards a fresh influx of support for Hezbollah and what that may mean for U.S.-backed rebel forces in Syria.

A top U.S. military official says rather than using any additional monies to invest more heavily in conventional forces, there are indications Tehran continues to focus on cultivating special operators to help lead and direct proxy forces, according to Voice of America.

“If anything, increased defense dollars in Iran are likely to go toward increasing that network, looking for ways to expand it,” U.S. Special Operation Forces Vice Commander Lieutenant General Thomas Trask told an audience in Washington late Tuesday.

“We’ve already seen evidence of them taking units and officers out of the conventional side that are working with the IRGC in Syria,” Trask added. “We’re going to stay focused on these proxies and the reach that Iran has well past Syria and Yemen but into Africa, into South America, into Europe as well.”

Yet despite Iran’s heavy involvement in Syria to help prop up the regime of President Bashar al-Assad, U.S. military officials see no indications much of that money has been set aside for bolstering Tehran’s conventional forces.

Nor do they see that as a likely scenario, even though the latest estimates from the U.S. intelligence community warn Iran is trying to develop “a range of new military capabilities,” including ballistic missiles, cruise missiles and armed drones.

Already, Iran is supplementing its own forces inside Syria by providing arms, financing and training for as many as 10,000 Shia militia fighters, including units from Iraq, Afghanistan and Pakistan, according to U.S. intelligence officials.

Military and intelligence officials further worry about the sway Iran has over tens of thousands of additional fighters who are part of Shia militias fighting in Iraq.

Fighting involving U.S. aircraft against Iranian-backed forces in the border town of al Tanf where Syria, Jordan and Iraq meet gave a prelude to what may be a wider war as Iran continues to pour resources into Syria to consolidate gains made by the Assad regime with the backing of Russia.

But conventional warfare isn’t the only area the mullahs want to expand as Steve King, COO and CTO of Netswitch Technology Management, pointed out Tehran’s investment in cyberattacks in Lifezette.

Since 2015, Iran has been conducting a sophisticated online cyberattack campaign that uses custom-built malware to deliberately infect and gain access to sensitive industrial control systems and critical infrastructure in companies across the globe, King writes.

All of this activity during the last two years has been like spring training for the Iranians: mostly practice attacks designed to sharpen their skills, he added.

King noted that according to a 2016 Defense Department report, Iran has evolved its cybersecurity operations to become the primary pillar of its national security strategy and has been testing the limits of sanctions and repercussions associated with the nuclear deal as they might be applied to their activities in cyberspace. So far, no reaction from the West.

Cyberwarfare is now as important to Iran’s military strategy as its ballistic missile program used to be, he warns.

The broad array of threats being presented by the Iranian regime is becoming readily apparent even though the Iran lobby and its supporters continue to work to obscure all of the regime’s actions.

One example is a piece by Cornelius Adebahr in Carnegie Europe that extols the virtues of a Rouhani win and what it means for Europe. It’s a puff piece for the regime and ignores the historical record of Iranian extremism.

Sadly, Adebahr only regurgitates the same false messages offered by groups such as the National Iranian American Council. The brutal reality of Iranian policy can’t be seen in the ballot box but in the battlefields across the Middle East.