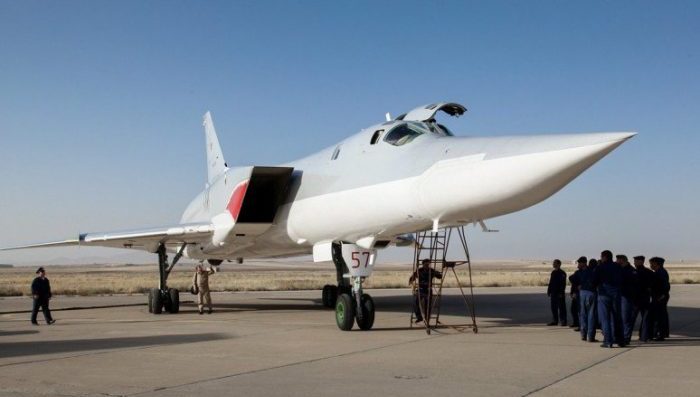 For the first time in the five year long Syrian civil war, Russian bombers took off from Iranian airfields to carry out strikes in Syria against ISIS; opening up a new and potentially disturbing new dimension to the widening war.

While the Russian military alerted U.S. military commanders in advance—a welcome break from past episodes that almost resulting in strikes against U.S. personnel—the attacks can be debated as to whether or not ISIS was truly the target or moderate rebel forces opposed to Assad were targeted instead.

The complications arising out of Syria grow even more intertwined as the mullahs in Tehran ratchet up the stakes to keep Assad in power and maintain their own foothold on that important region of the Middle East.

That commitment of going all in to save the Assad regime as well as their Shiite sphere of influence was confirmed by U.S. military officials who now estimate as many as 100,000 Iranian-backed Shiite militia are fighting on the ground in Iraq, raising legitimate concerns that if ISIS is defeated in Iraq and Syria, the U.S. would now be stuck facing a hostile force in three unified countries.

Whether the force size is 80,000 or 100,000, the figures are the first-known estimates of the Iranian-backed fighters. The figure first surfaced in a recent Tampa Bay Times article and marks the latest evidence of Tehran’s deepening involvement in the war against ISIS. The growth also could create greater risk for Americans operating in the country, as at least one Iran-backed group vowed earlier this year to attack U.S. forces supporting the Iraqis.

That was followed by a massive arms purchase of Russian weapons by Iranian mullahs, following the nuclear agreement and now comes the staging of air strikes from Iranian airfields.

The strikes in Syria and Iraq mirror and heightened intensity within Iran to suppress dissent as well as gather more pieces to be used on the hostage chessboard as the regime confirmed the arrest of yet another dual-national citizen, this one reportedly a British subject.

The person faces espionage charges after being taken into custody, prosecutor general Abbas Jafari Dowlatabadi told the official Islamic Republic News Agency. He didn’t disclose the person’s name or second nationality, or elaborate further on the case according to the Wall Street Journal.

At least six other Iranian dual nationals have been arrested this year, many of whom stand accused of spying or attempting to undermine the Iranian system. The pickup in arrests follows a rare prisoner swap agreed to in January under which Iran released four prominent American prisoners—including Washington Post reporter Jason Rezaian—and the U.S. freed seven Iranians, along with a widely ridiculed payment of $400 million in cash the regime has claimed as ransom.

Recent arrests in Iran include Nazanin Zaghari-Ratcliffe, a British-Iranian employee of the Thomson Reuters Foundation, the charitable arm of media giant Thomson Reuters, who was picked up in April and later accused of being a spy. Others include three Iranian-Americans and an Iranian-Canadian professor.

The latest American to be arrested, San Diego-resident Robin (Reza) Shahini was formally charged with “acting against national security,” “participating in protest gatherings in 2009,” “collaborating with Voice of America (VOA) television” and “insulting the sacred on Facebook,” but his lawyer has not been granted access to the evidence being used against Shahini, an informed source who requested anonymity told the media.

Interestingly, the Iran lobby has been particularly silent on the new wave of hostage taking, as well as the expansion of the Syrian and Iraqi conflicts and news came out today of how one of the ardent supporters of the regime’s receipt of the $400 million ransom payment was on the payroll of a prominent Iran lobby group without disclosing it.

A Washington Post writer who recently claimed that a $400 million cash payment to Iran was “American diplomacy at its finest” failed to disclose that he has been on the payroll of an organization that emerged as a chief architect of the White House’s self-described campaign to build a pro-Iran “echo chamber,” according to information obtained by the Washington Free Beacon.

Allen S. Weiner, a Stanford law professor and contributor to the Post’s opinions section, co-authored a piece arguing in favor of the Obama administration’s decision to pay Iran $400 million in hard currency in what many described as a “ransom payment” for the release of several U.S. hostages.

Weiner and the Post failed to disclose that the writer has long been on the payroll of the Ploughshares Fund, an organization recently exposed as a key cog in a White House-orchestrated campaign to build what it called a pro-Iran “echo chamber.”

The disclosure paints an even more disturbing picture of the efforts the Iran lobby and supporters of the regime will go to in order to paper over the bloody conflicts the Iranian regime is now waging around the world.