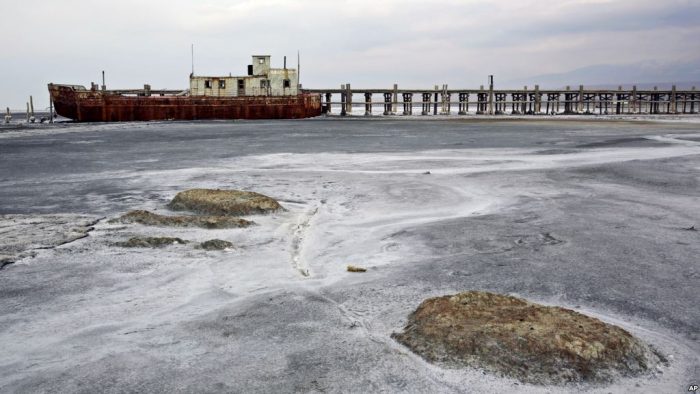 The Los Angeles Times ran a story examining the deteriorating plight of Iran’s agricultural industry and state of its environment in general; both of which are spiraling downward as dismally as human rights for the Iranian people.

The Islamic paradise promised by the mullahs when they hijacked the Iranian revolution three decades ago, has not come to pass and in its place is a land that has grown parched, where crops have died and entire communities are on the brink of collapse.

Iran’s worsening water crisis has spread desperation across this parched farm belt. Families watch sons leave the villages to hunt for scarce work in the cities. Crops are abandoned. The elderly and infirm forego medical care because they barely have enough money to survive, the Times said.

Iran’s farmers have struggled with several successive years of drought. But environmental mismanagement, water overuse, the pressures of population growth and a government more concerned with security and economic challenges have exacerbated Iran’s agricultural problems, the Times added.

In June, Iran’s Meteorological Organization said 72% the country’s 80 million people were living in “prolonged drought” conditions. Lakes are drying up and cities like Tehran have considered rationing water.

All of which points a devastating picture of how poorly the mullahs have managed the precious natural resources of the country for its people, but that insensitivity to the environment goes all the way back the founding of the Islamic Republic.

The late Ayatollah Ruhollah Khomeini, founder of the Islamic Republic, once told an aide who worried about inflation that Iran’s 1979 revolution “was not about the price of watermelons” — meaning it stood for loftier goals such as economic equality and redistribution, said the Times.

Khomeini’s successors, today’s leaders such as Hassan Rouhani and Ali Khamenei, have even less regard for the environment as they pour billions of dollars into three wars in Syria, Iraq and Yemen and steer the billions in unlocked assets resulting from the nuclear deal to go on a military shopping spree to buy fighters, missiles, ammunition and bombs.

The situation is so dire in many of Iran’s heartlands that many Iranians don’t know what to do next and the regime has been unresponsive to all of their entreaties for help.

In Qiyasabad, residents now must dig as deep as 500 feet to find water. The Hablehrood river, which flows down dun-colored hills to the north, is too salty to use for irrigation, they say. Most farmers still flood their fields to irrigate crops, which is terribly wasteful.

“Ten years ago, I swear, our water was fresh and plenty,” said Karim Baluchi, 54. “Ten years ago I had a decent life.”

He and half a dozen co-owners asked the government this year for a $6,000 loan for a new well and water pump. No one has responded, he said.

According to the Times article, last June, a senior cleric raised eyebrows when he said the drought was caused by women failing to wear appropriate Islamic dress; a clear example of how backwards the mullahs view their nation’s problems.

That lack of concern over Iran’s crumbling environment extends to some of its greatest treasures, including the Asiatic cheetah, otherwise known as the Iranian cheetah, a subspecies of the world’s fastest mammal that exists only within Iran and is on the verge of extinction.

According to the Los Angeles Times, Bahman Jokar, head of the cheetah desk at Iran’s environmental agency, said about 50 cheetahs are believed to remain in Iran’s central deserts – a population so small that to save it requires emergency measures.

“Unfortunately our government and parliament have other top priorities and saving the Asiatic cheetah is not the top one,” Jokar said in a rare bit of candor from an Iranian official over how dire the situation is for the big cats which are deeply rooted in Persian culture and the history of the country going back more than ten centuries.

It’s worth noting that the Caspian tiger and Persian lion, two other species of big cats native to Iran have already gone extinct under the Iranian regime.

The gross mismanagement and disregard for Iran’s environment by the ruling mullahs extends to the perilous condition of Lake Urmia, the largest lake in the Middle East and sixth-largest saltwater lake in the world which has shrunk to 10 percent of its former size due to damning and overpumping of groundwater.

Even though Rouhani has made continued promises to save Lake Urmia for the cities in Iran that depend on its water, but little has been done and the damage may be irreversible according to environmentalists.

In an article in The Guardian, researcher Shirin Hakim and water management expert Kaveh Madani at the Centre for Environmental Policy of Imperial College, London, described Urmia’s surface as “an area facing a high risk of salt storms.”

The article pointed out that the shrinking of the lake has diminished a fragile ecosystem, with the gradual disappearance of native wildlife including the brine shrimp Artemia and migratory birds like flamingos and pelicans. Such degradation threatens dire economic consequences.

One of the main factors contributing to the state of Lake Urmia is the interference in the natural flow of water into the lake by over 50 dams. The damage has been compounded by unregulated withdrawal of water, water-intensive irrigation and the unsustainable use of fertilizers.

Even as Iran’s environment is destroyed and slowly turned into a wasteland, the mullahs and Rouhani are desperately working on an oil agreement with OPEC to allow it to pump even more oil to sell on the market in order to make up the enormous costs of fighting the Syrian war and keep the Assad regime afloat.

The irony is inescapable and so is the responsibility for this environmental catastrophe which rests on the mullahs in Tehran.