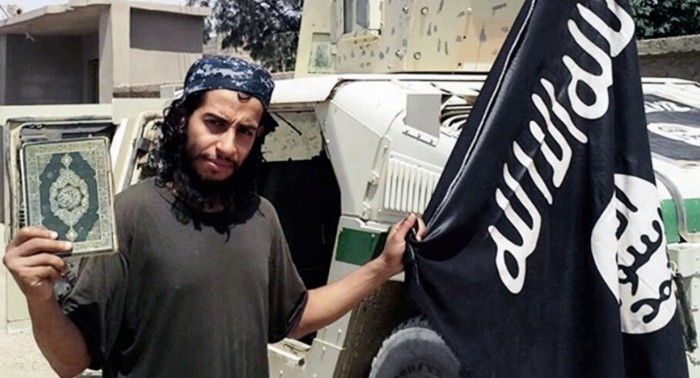 Over the years the world has seen many fantastical and absurd claims coming from leaders of the Iranian regime such as the denial of the Nazi Holocaust by Mahmoud Ahmadinejad, but the regime hit a new level of outrageousness when the regime’s top mullah, Ali Khamenei, implied that the U.S. created ISIS as a means of distracting world attention away from crimes perpetrated by Israel.

But Khamenei didn’t stop there; he included the creation of Al-Qaeda as another part of a decade long program by the U.S. to shield Israel from scrutiny. I’m sure if we wait long enough, Khamenei will issue a video saying the U.S. was behind the 9/11 attacks as well.

The video, posted on a Facebook page affiliated with the Revolutionary Guards and first reported by the Middle East Media Research Institute, explains that the U.S. created the Islamic State to advance its own agenda.

“France is going through sad bloody nights. Bloodiest blood has been shed on the streets of Paris, reportedly by the ISIS [Islamic State] terrorists,” the narrator states as the video shows footage of the aftermath of the Paris attacks. “Many express condolences. Even the Saudi king and the U.S. president. The same ones whose involvement in creating the ISIS project is being exposed more than ever.”

Additionally, the video features Wesley Clark, former NATO supreme commander, explaining that ISIS was developed in part through funding that was directed at recruiting individuals to fight Hezbollah, the Lebanese group that is staunchly allied with Iran and Syrian President Bashar Assad, who Syrian rebels have unsuccessfully been trying to unseat for several years in a civil war that has claimed hundreds of thousands of lives.

It is worth noting that the video makes pains to insinuate that the US facilitated the formation of a terrorist menace to fight the Iranian regime’s Mideast allies: Assad and Hezbollah.

The video concludes with the narrator appearing to question al Qaeda’s involvement in the Sept. 11, 2001 terror attacks, according to the Washington Free Beacon.

According to the Middle East Media Research Institute, Khamenei’s office was responsible for producing the video. The clip concludes with a picture of the address for the supreme leader’s website.

The video is part of the larger effort being mounted by the Iran lobby to try and distance the regime from any responsibility for the surge in terrorism from groups like ISIS that were inspired by the template of terror laid down by the Iran regime originally through its support of Hezbollah and its own Shiite militias.

Meanwhile, many regime leaders and institutions in Iran have celebrated the Paris attacks according to the National Council of Resistance of Iran, an umbrella organization of Iranian dissident groups.

Hamid Abu Talebi, political advisor to regime president Hassan Rouhani and former ambassador to France, has described the terrorist crimes in Paris as “inevitable”, “the outcome of the West’s arbitrary measures in supporting terrorism … and neglecting Iran’s warnings during the past few years”.

“The French have paid the price of their government’s support for ISIS and terrorism,” said Brigadier General Massoud Jazayeri, deputy commander of Iran’s armed forces general staff. Describing the Syrian people’s resistance as terrorism he added, “From the first months of the terrorist measures in Syria and other neighboring countries, we gave numerous warnings to Europe that terrorism will engulf their lands.”

Tasnim, the news agency affiliated to the Quds Force, described the Paris tragedy as “homemade terrorism” in France and Europe and wrote, “Khamenei had during the past few years warned Western leaders that supporting terrorism in the region will eventually turn back on you… and in the not so distant future, these groups will cause turmoil in the same countries that supported them.”

Far from condemning the attacks, the Iran regime has sought to leverage the attacks for its own political purposes in shifting attention to rival Saudi Arabia and away from the ongoing offensive in Syria which spawned ISIS in the first place.

In an insightful piece for Foreign Affairs by Ray Takeyh and Reuel Marc Gerecht, the Iran regime is seen as taking advantage of ISIS to consolidate its power in the region as it props up Shiites in control of Iraq and Assad’s Alawite sect in Syria just enough to keep Sunni jihadists from complete victory.

This balancing act by the Iran regime according to Takeyh and Gerecht could result in a permanent destabilization of the Arab heartland benefiting Iran as the mullahs use broad sectarian conflict to keep Saudi Arabia bogged down in a civil war in Yemen and Egypt and Turkey off balance with ISIS attacks.

They point to how the Iran regime built the original model for terrorist integration in Lebanon when it melded a variety of Shia parties into Hezbollah which it used as a proxy to attack the U.S. and its allies abroad. The mullahs repeated the model in Iraq after 2003.

“Tehran had two complementary objectives: drive the United States out and prevent the formation of a new anti-Iranian Iraq. Once again, Iran turned to the development of radical Shia militias. The paramilitary outfits lacerated U.S. forces and intimidated, and sometimes killed, secular Shiites and recalcitrant Iraqi clerics,” Takeyh and Gerecht write.

Ultimately, the mullahs aim will be to use the Paris attacks to their advantage and leverage the threat of ISIS – a threat they created – to allow the regime to force alliances with Russia, U.S., France and other nations and make it an indispensable partner in a war on terrorism that it supports already.